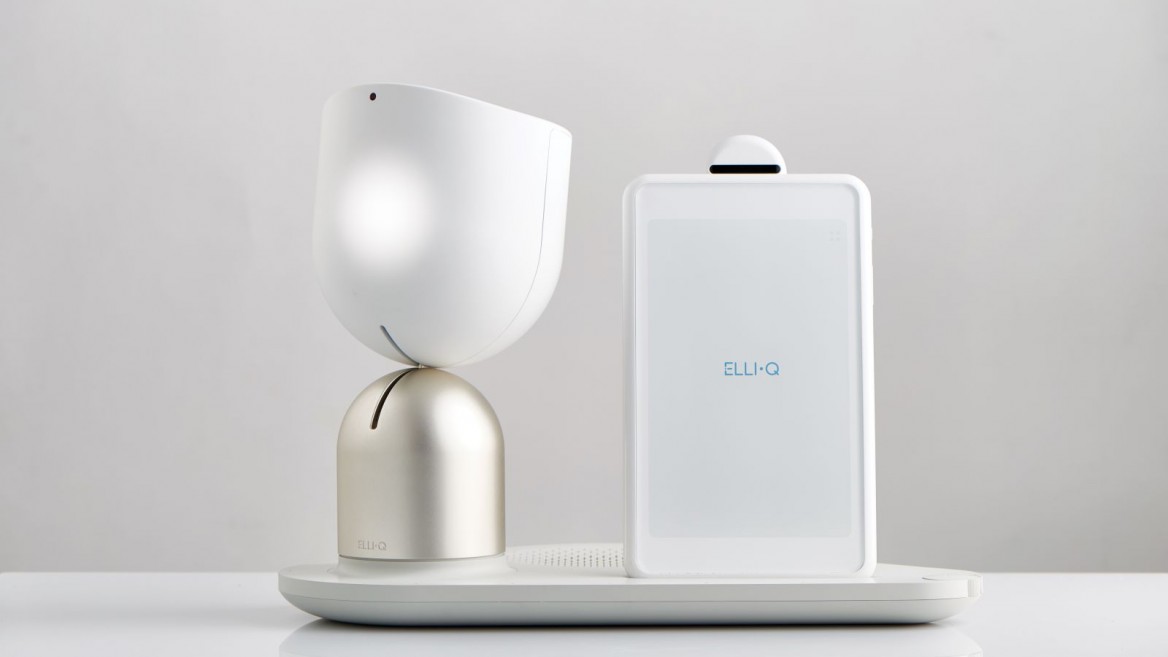 Elli is the Norse goddess of old age. Elli•Q, named in her honor but with an original twist, is a robotic companion who emerged from stealth mode today on a quest to alleviate loneliness and social isolation for older adults living alone.

Elli•Q is the brainchild of Intuition Robotics,  a Ramat Gan startup pioneering social companion technologies. The robot’s mission is to be an “active aging companion,” keeping older adults engaged by helping them access and connect to today’s technologies, including video chats, online games, social media and other ways to stay in touch.

“We set out to create this company to have a positive social impact,” Dor Skuler, CEO and founder of Intuition Robotics, tells ISRAEL21c. “While we don’t expect a robot or technology to be people’s friends or solve the problem of loneliness, we do think that technology can overcome barriers and bring people together in a way that’s not happening today.”

“Loneliness and social isolation are the result of longevity, and technology has made the problem worse by requiring older adults to learn new technical skills in order to accomplish the simplest of tasks,” says Skuler, a serial entrepreneur who also founded startups Zing and CloudBand.

Using “natural communication” such as body language, speech interface, sounds, lights and images to express herself, Elli•Q is designed to be emotive, autonomous and easily understood. She uses machine learning to acquire knowledge of the preferences, behavior and personality of her owner, and proactively recommends activities based on that history and recommendations by family.

“Our goal is to leverage a combination of our proprietary technology, gerontology knowhow and elegant design to empower older adults to intuitively interact with technology and easily connect with content and loved ones, and pursue an active lifestyle. We like to think of Elli•Q as part communication coordinator, part arbiter of lifelong learning and part coach. She’s easy to talk to, simple to operate and understands her owner.”

On exhibit in London

A prototype of Elli•Q made its public debut at the Design Museum in London as part of its “New Old: Designing for our Future Selves” exhibition running through February 19, which looks at how new approaches to aging, from robotic clothing to driverless cars, can help people lead fuller, healthier and more rewarding lives into old age.

According to Age UK, nearly half of all people aged 75 and over live alone and more than 1 million say they always or often feel lonely. Thirty-six percent speak to fewer than one person per day and 11% say they spent five days or more a month without seeing anyone.

Moreover, the organization reports that older adults living in isolation increasingly rely on technology rather than face-to-face interaction, yet they often find the technology confounding. Of course, keeping older adults both physically and mentally active is important for health and cognitive reasons.

As such, Intuition Robotics programmed Elli•Q to prompt users to engage. Elli•Q recommends TED talks, music or audiobooks; the robot suggests physical activities like going for a walk. It’s also a personal assistant and reminds users about appointments or taking medications on time.

Elli•Q’s pioneering design is a collaboration with famed industrial designer Yves Béhar and his studio, Fuseproject.

“The idea of having a robot companion is quite dystopian, especially for older generations. Through years of research, we were able to develop a design language and user experience that feels natural, with subtle expressions to develop a unique bond between Elli•Q and its owner. Elli•Q could never replace human interaction, but it can be an important motivating factor in keeping older adults healthy and active when living alone,” says Béhar.

At the moment, Elli•Q is only a prototype. Skuler says the robot will enter early trials in San Francisco and Israel in February.

“A lot of our success or failure with Elli•Q will be in our ability to create a full experience with older adults and help overcome the complexity of the digital world,” he says.

If Elli•Q succeeds in its mission, it could launch the next trend of smart social robots in homes the world over.