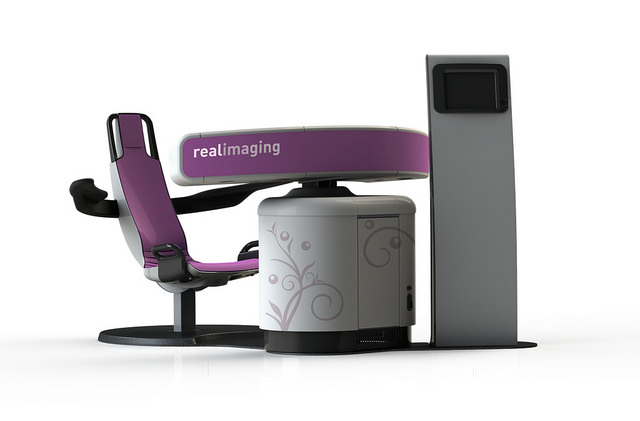 Real Imager 8 screens for breast cancer without touching the patient.

Real Imager 8 screens for breast cancer without touching the patient.

A no-radiation, no-contact device that could revolutionize breast cancer diagnosis is several steps closer to the market as it undergoes further clinical trials in Israel, in Sweden and in two major US cancer centers.

Real Imaging’s Real Imager 8 is eagerly anticipated as a safe, painless and more accurate screening to complement mammography. It has already received the CE Mark in Europe, and is preparing to apply for additional regulatory approvals from agencies including the US Food and Drug Administration.

ISRAEL21c first wrote about the company in 2011, when the device (then called RUTH) was going into clinical trials in Israel.

Since then, the company has honed the technology embedded in the RI-8 systems — called MIRA (for Metabolic Imaging and Risk Assessment) – and proved it can classify women for the likelihood of harboring cancer.

MIRA objectively assesses imaging biomarkers associated with metabolic processes in the breast tissue, so it can detect cancer earlier than current screening modalities such as mammography and ultrasound. The RI-8 is especially welcome news for women with dense breast tissue, and that includes the majority of young women.

At last year’s meeting of 60,000 American and European radiologists at the Radiological Society of North America, Real Imaging’s technology presentation was voted a promising innovation and was highlighted in the conference bulletin.

A polar bear in a snowstorm

CEO Maiki Yoeli says the company is shifting from R&D to international exposure, approaching the market stage. New investors from the life-science and med-tech fields in Canada and Hong Kong have come aboard including China Everbright, the largest investment bank in Hong Kong.

The device is particularly appealing to China and other Asian-Pacific countries where incidence of breast cancer is rising, Yoeli tells ISRAEL21c.

Most Asian women have dense breast tissue, which mammography does not image well. A tumor usually appears as a white object on a mammogram because of its density. But if the entire breast is dense, a tumor is much more difficult to spot – like trying to find a polar bear in a snowstorm.

In the general world population, most women under 40 years old — and 40 percent of women over the age of 40 — have dense breasts, which is a cancer risk factor in itself. These women therefore must be screened with an additional modality such as ultrasound, or undergo an invasive exam such as an MRI.

Yoeli explains that the RI-8 device isn’t necessarily meant to replace mammography but to become the standard adjunct system for breast cancer screening, particularly suited for women with dense breast tissue. And, he adds, “The MIRA test is less expensive than other imaging alternatives.”

It’s all about risk

“We believe our technology will lead the fight against breast cancer,” says Dr. David Izhaky, VP for research and development for Real Imaging.

“We have done clinical trials in six medical centers in Israel, and have imaged hundreds of women. In one peer-review published blind study, the efficacy of the technology demonstrated a sensitivity above 90 percent, and even higher for women with dense breast tissue.”

Dr. Miri Sklair-Levy, director of the Breast Imaging Center at Sheba Medical Center, the principal investigator in some of the early clinical trials, reported that “preliminary results suggest that MIRA technology imaging has both high sensitivity for the detection of breast pathology and high specificity.”

She tells ISRAEL21c: “Density does limit the sensitivity of mammography, so I hope [the RI-8] will provide a good adjunct tool.”

The technology was innovated by serial inventor and electro-optical engineer Boaz Arnon, who lost his mother to breast cancer in 2004. He was determined to find an accurate, cost-effective screening alternative to mammography.

Izhaky explains how it works. “A cancer is smarter than us and will trick the human body such that our body will generate blood vessels and a specific environment to enable the tumor to grow and expand. Those metabolic changes precede the anatomic ones. Once detection is targeted to this stage, there is a good chance that the cancer can be caught at a very early stage.”

The Karolinska Institute studies, involving 2,000 women with dense breasts, are part of the Swedish institution’s goal of developing a risk-based screening program.

UNCOVER ISRAEL - Get the ISRAEL21c
Weekly Edition free by email
Sign Up Now!
Bring Israel's story to life.
Millions of people around the world rely on us to gain a deeper understanding of Israel. We are the trusted source for original content you won't find anywhere else.
You can make a difference. Donate today to support journalism that brings Israel’s story alive.
SUPPORT ISRAEL21c
Read more on:   Health, Medical devices, Breast Cancer, real imaging