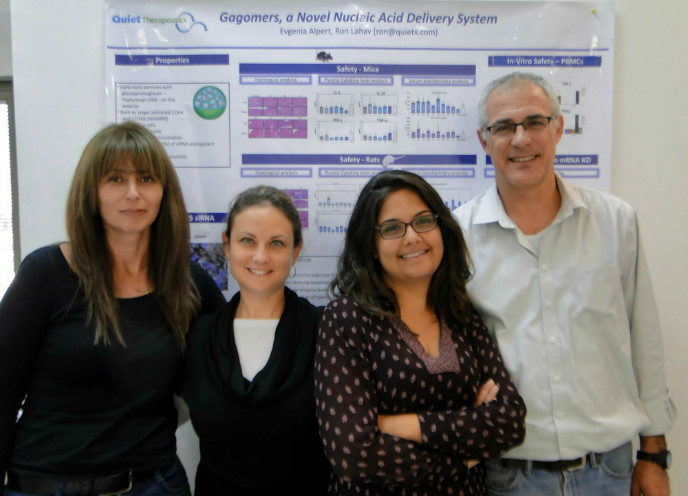 An Israeli breakthrough in the treatment of cancer has the international medical community taking notice. Developed by Tel Aviv University Professors Rimona Margalit and Dan Peer, this novel drug-delivery platform involves the use of “GAGomers,” a new class of nanoparticles (coated with glycosaminoglycan, or GAGs, a polysugar) that specifically target tumors and blood cancers based on a biomarker expressed on malignant tissue.

For their groundbreaking work, Margalit and Peer were granted the prestigious Untold News Award in New York City in November.

But it was already back in 2010 that leading Israeli venture capital firm Pontifax established the bio-pharmaceutical company Quiet Therapeutics, to make Margalit’s and Peer’s innovative platform accessible and marketable to oncology patients and their doctors.

Currently funded by Pontifax and Arkin Holdings, the biotech startup initially operated within the incubators program of the Office of the Chief Scientist, the arm of the Economy Ministry charged with fostering industrial research and development in Israel.

Quiet Therapeutics General Manager and Chief Operations Officer Dr. Ron Lahav explains why GAGomers are what he calls “game-changers” in the field of cancer-treatment technology.

“A hallmark of cancer is cell replication,” he tells ISRAEL21c at the company’s office in the Weizmann Science Park in Ness Ziona, south of Tel Aviv. “The aim of most chemotherapeutic drugs is to thwart the replication machinery in cancer cells. The problem is that these drugs are not targeted, and therefore are not delivered efficiently to the tumors.

“Due to this inefficient delivery, and the accompanying unwanted side effects, oncologists face the problem of administering sufficient chemo to kill the cancer, while limiting its dose so as not to cause irrevocable harm to healthy tissues. Our drug-delivery system has the potential to greatly minimize that dilemma, since it transports the drugs directly and specifically to the cancer cell.”

To put it metaphorically, Lahav calls the GAGomers a sort of “Trojan Horse,” a vehicle carrying the “chemo soldiers” directly to the cancer cells by entering undetected as an invader.

Furthermore, he says, “Our technology is very versatile. It is capable of encapsulating a broad range of therapeutic payloads. This versatility opens the door to a whole new class of DNA- and RNA-based therapeutics, which have great promise, but thus far have not reached their full potential.”

The results in the lab have been successful.

“When treated with nucleic acid-based substances (such as DNA and RNA or chemotherapeutic drugs) entrapped within the GAGomers, tumors induced in mice from human cancer cells were greatly reduced or eradicated altogether,” he says. “And with no significant undesirable toxicity.”

Publicity about this innovation, following Margalit’s and Peer’s recent award, has spurred numerous requests for more information from cancer patients in different parts of the world.

What Lahav tells them is that the pioneering treatment not only promises to be more effective, but will involve far less suffering from the common side effects of chemotherapy, such as nausea and hair loss.

Lahav, who received his PhD in environmental microbiology from Ben-Gurion University and a post-doctorate in molecular biology from Princeton, says his personal wish is to be able to have a similar experience at Quiet Therapeutics that he had at his previous job at Quark Pharmaceuticals, a company that recently completed Phase II clinical trials of its novel RNAi-based therapeutics.

“There is nothing as moving as reading letters from patients and their families, thanking us for helping them in their battle against cancer,” he says. “When we would read these letters aloud to the staff, not a dry eye was left in the room. This is the best kind of reward for hard work.”

To make this wish come true, Lahav and his team of five — including his business partner, head of research Dr. Evgenia Alpert — are working fast and furiously to move their groundbreaking technology from the laboratory to the clinic.