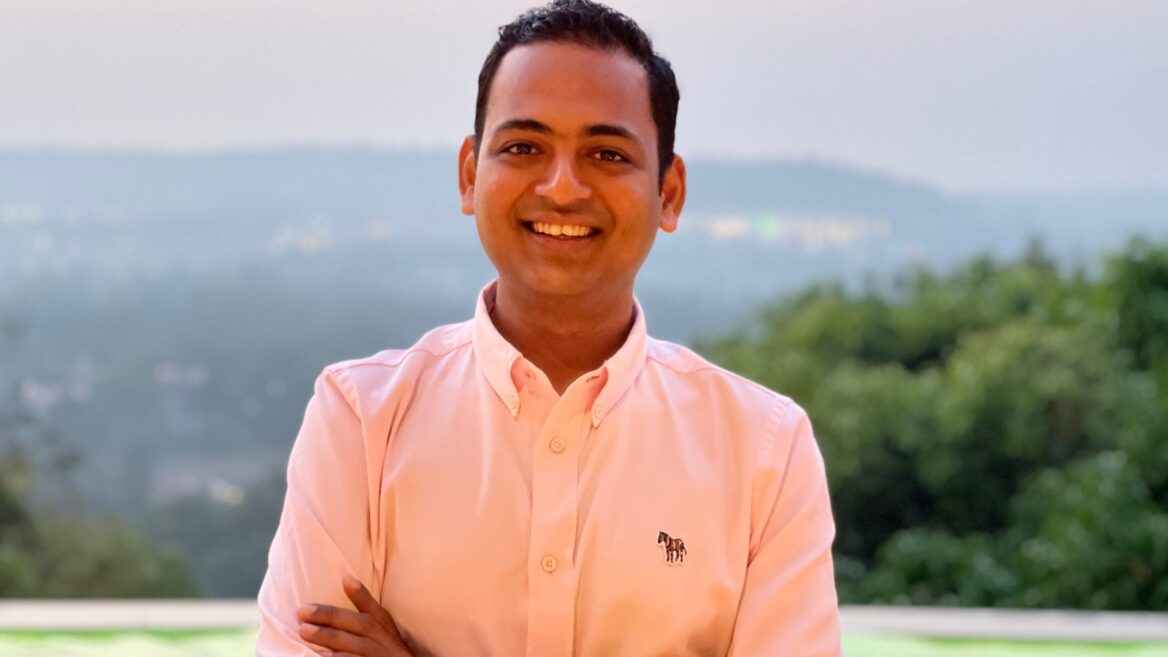 Saket Agarwal is a 30-year-old chartered accountant in India. How did he become Israel’s unofficial business and technology ambassador to his country?

It’s an inspiring story of how one man can significantly impact two simpatico countries – one tiny (Israeli population 9 million) and one huge (Indian population 1.35 billion).

“India is a land of consumers. Because our population is so large, we think of solving more consumer-led problems, while Israel is solving more deep-tech problems,” he tells ISRAEL21c.

“Indian companies were scaling fast and all of them were looking for solutions across five buckets – cloud, data science, AI, cybersecurity and marketing. So we created a stack of 15 Israeli companies in each of these categories and bundled them for our customers.”

Five years ago, Agarwal learned about Israel’s many game-changing technologies and wondered why they were not being marketed to India.

“I realized if I could identify some amazing Israeli companies, I could run their business for the Indian market.”

He booked a 17-day trip to Israel, meeting VIPs including venture capitalist Elie Wurtman, cofounder and partner of PICO Partners — and now a member of Onnivation’s advisory board along with local legends Dov Moran and Moshe Lichtman. 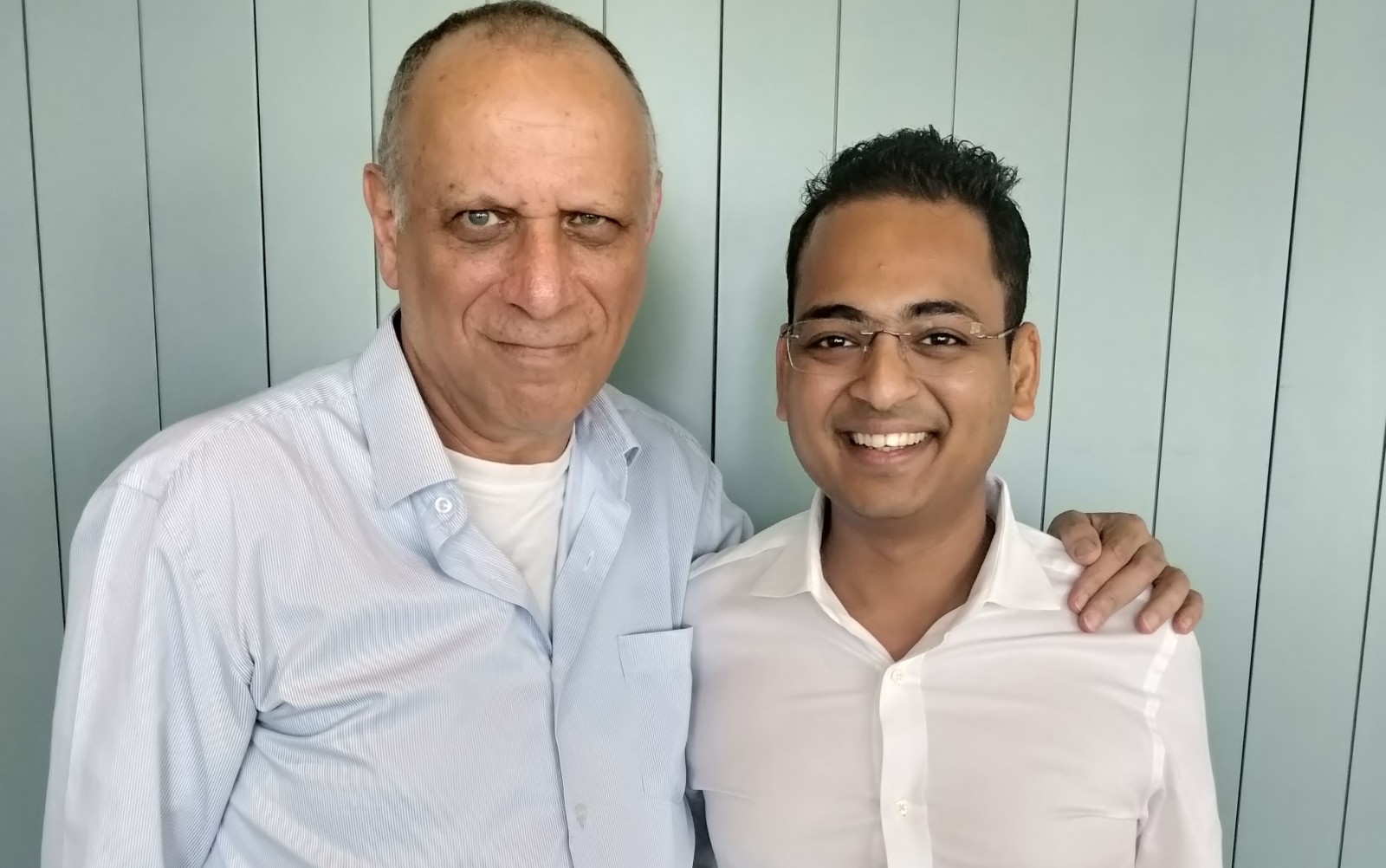 “Elie said he’d just invested in a startup called Spotinst. He asked me, ‘Why don’t you see if you can do something with them?’

“I found out that Spotinst saves you 80 percent on your Amazon Web Services bills. I’m an accountant by qualification; back then I did not know about cloud computing. But I knew that cost saving would definitely work in India,” Agarwal relates.

“I went home and hired a team. And I started selling Spotinst as their partner. Our clients were saving tons of money on cloud bills, which are quite high in India. Today, we have 100-plus customers, all the top consumer apps in India, including Swiggy — India’s largest food aggregator, Sony Entertainment and Zee5, which is like the Netflix of India.”

Wurtman tells ISRAEL21c that the company, now called Spot and recently acquired for $450 million, “generates a great percentage of its global revenue from India, thanks to Saket Agarwal.” 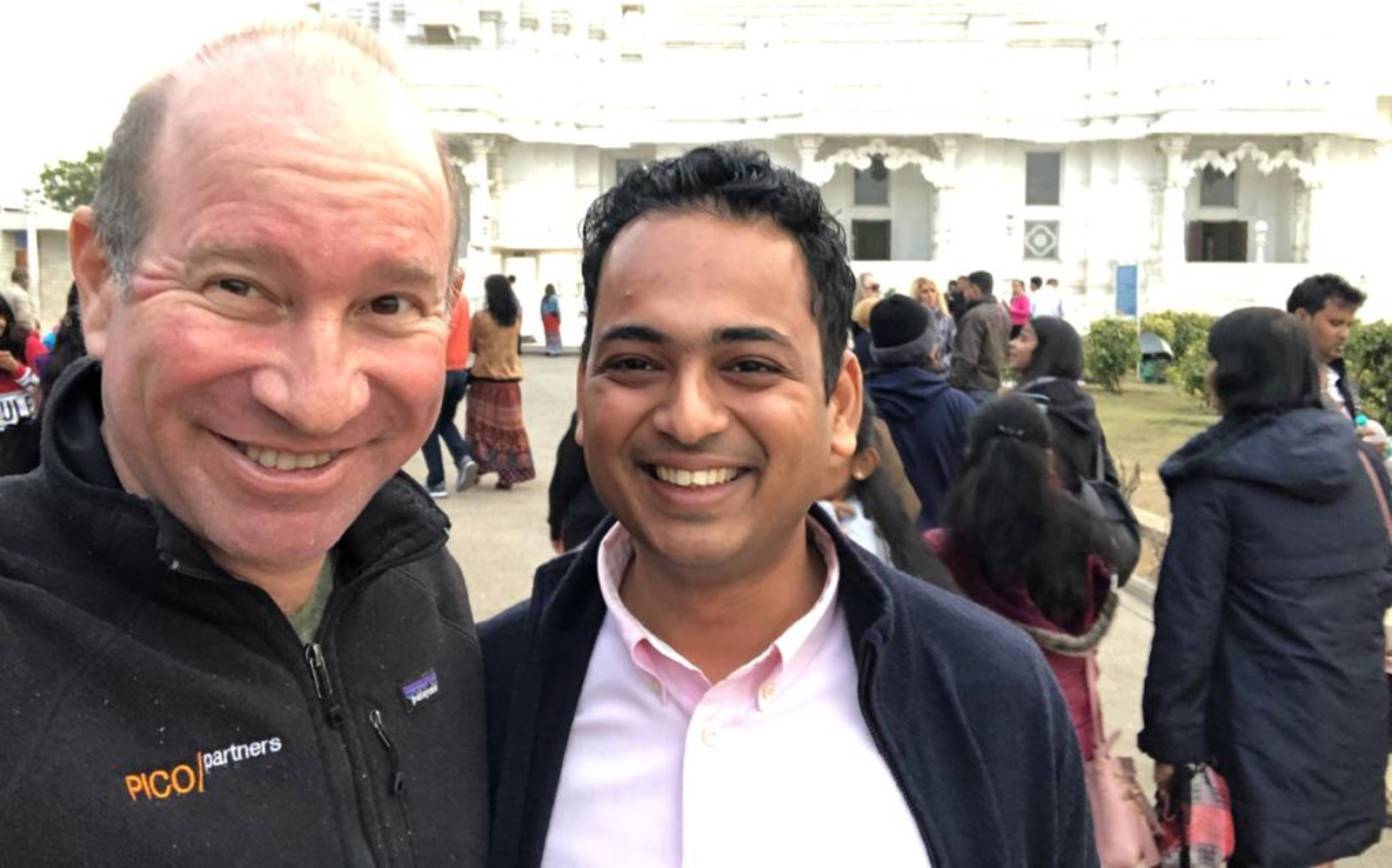 Wurtman made additional introductions for his Indian friend. “Today, the team Saket has built represents a one-stop-shop portfolio of Israeli tech solutions that he brings to the Indian market, resulting in millions of dollars in transactions and value for Israeli tech companies,” says Wurtman.

“He has also organized multiple delegations for several of India’s major enterprise companies to introduce them to Israeli tech solutions to solve their most pressing business challenges.”

Myntra, the fashion retail arm of Flipkart– India’s largest unicorn after its acquisition by Walmart in 2018 –is deploying Israeli solutions from Onnivation to transform the online shopping experience.

Before bringing the Myntra management team to Israel, Agarwal asked them to identify their needs.

“The CEO said, ‘My biggest problem is personalization. A customer is wearing a shirt and wants us to recommend in real time the best jacket that goes with it.’ The CTO said, ‘I’m looking for cybersecurity and developer productivity.’ The CFO said, ‘We need warehouse automation solutions.’

“Based on the pain points I understood from them, we curated 35 companies in Israel including the 15 companies we represent. And today Myntra is engaged with many of them,” says Agarwal. 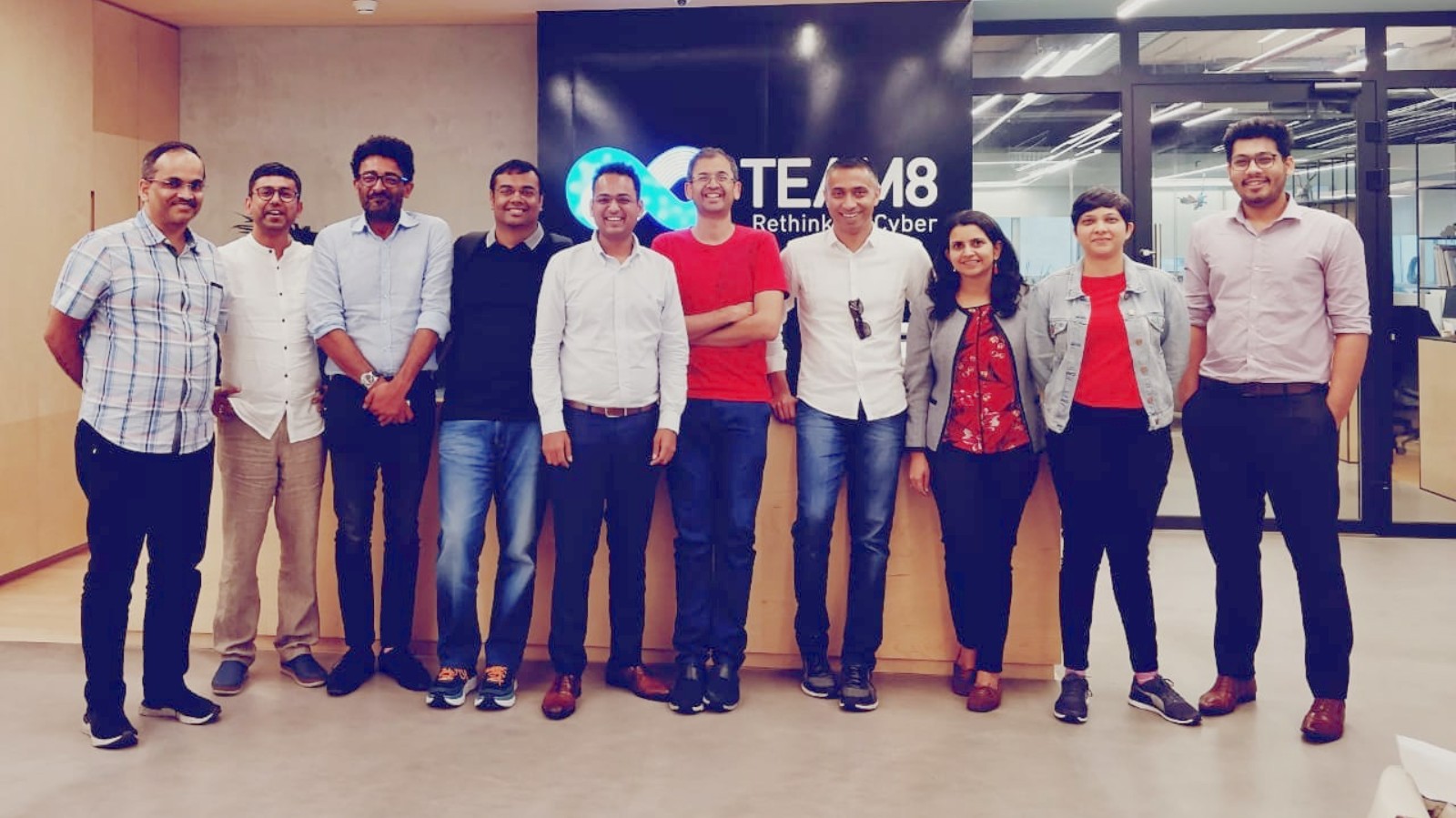 For BookMyShow.com, the largest ticketing platform in India – it sells 10 times more tickets than Ticketmaster in the US – Agarwal hosted a dinner with the top VCs in Israel.

“The objective was for BookMyShow to look at investing or acquiring portfolio companies of these VCs that are very strategic to their business,” says Agarwal. 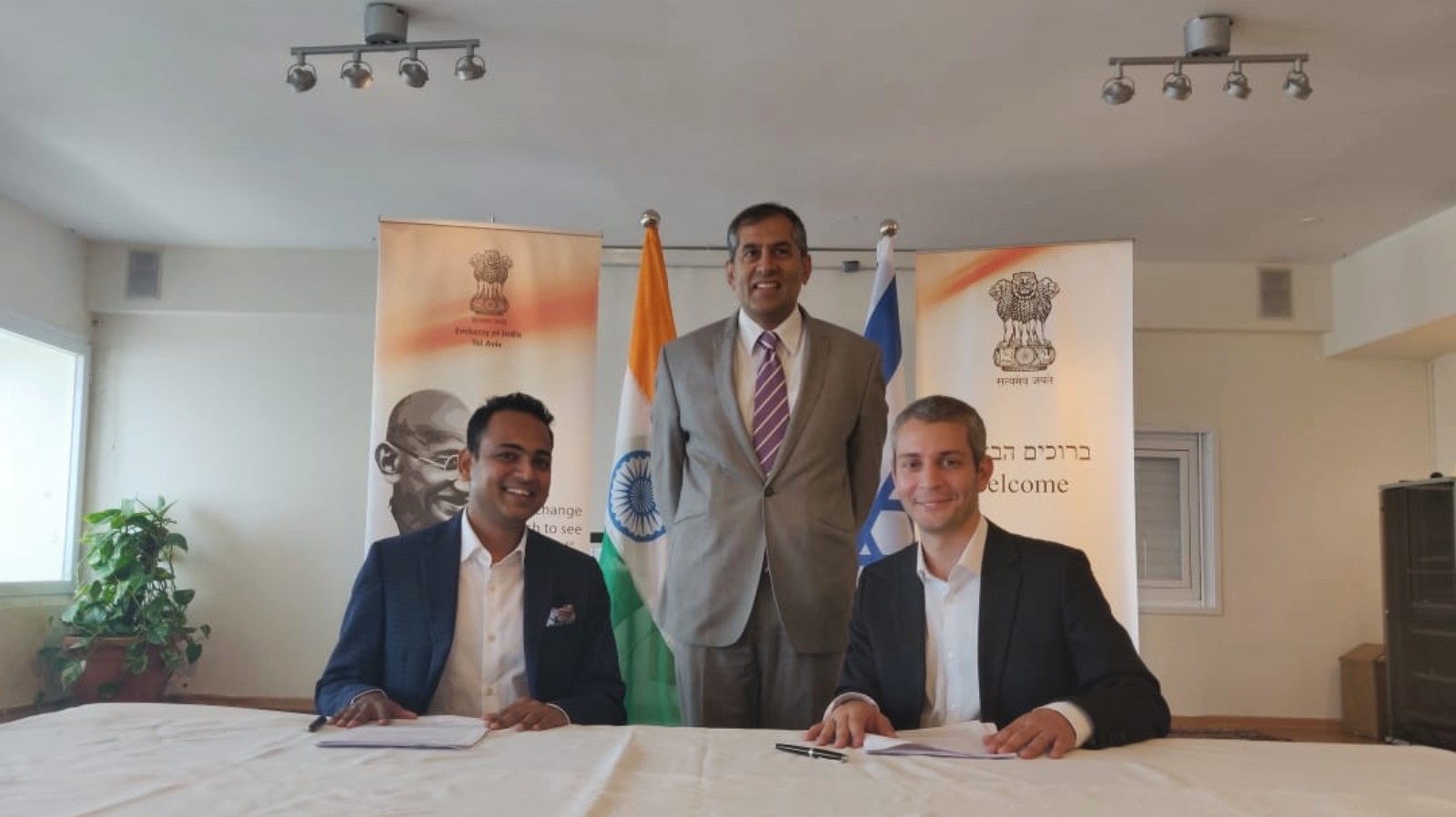 Saket Agarwal, left, at the signing of a memorandum of understanding between Zee5 and Applicaster. Applicaster CEO Jonathan Laor is at right, as Indian Ambassador to India Pavan Kapoor looks on. Photo courtesy of Onnivation

“We’ve become an extended strategy and innovation arm for our customers. When a customer thinks about building a new feature or solving a problem, we ask, ‘Why reinvent the wheel when there is someone in Israel who’s already got a plug-and-play solution?’

“Since we are deeply rooted in the Israeli ecosystem and know every VC, customers know we can find them a technology that solves their problems.”

Agarwal also began investing in Israeli startups, about 20 so far, together with “marquee” co-investors such as the ex-CEO of Facebook India and CTOs of large unicorns. 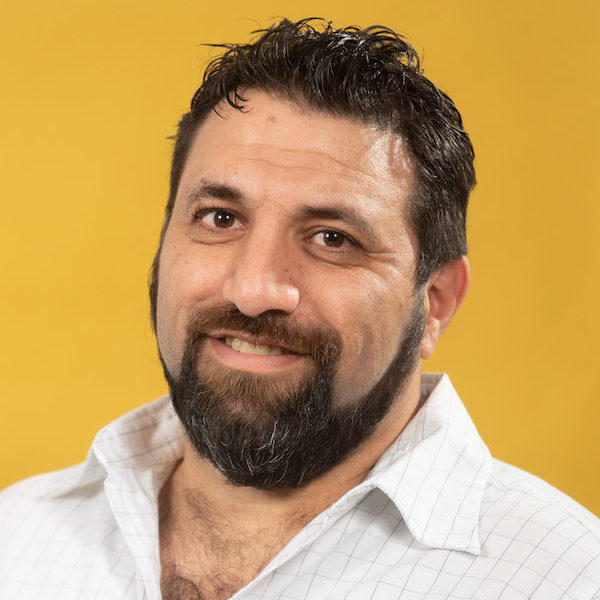 In October, Israeli AI data management startup Dataloop raised a $16 million in funding following the completion of an $11 million Series A round led by Amiti Ventures with participation from eight Indian angels and Agarwal.

“India has a rich tech ecosystem and talent; it has the ability to create an affordable, large data-labeling workforce, which is rare within a tech ecosystem,” Dataloop cofounder and CEO Eran Shlomo tells ISRAEL21c.

“We are betting that India will take advantage of this opportunity to be positioned at the center of the AI market five to 10 years from now. We want to help accelerate that, and Onnivation can offer us networking opportunities and connections with Indian industrial facilities.”

Shlomo notes that Israel stood at the nexus of ancient trade routes linking Asia and Africa.

“Today, we’re still right in between. Because of the time zones, we can do business in the first half of the day with the East and in the second half with the West. This will help position Israel as a routing point for AI data.”

Agarwal plans to close 15 more investments in Israeli startups in the next year, and to launch an India-Israel-specific fund in the next two years with “a group of elite individuals in India, who would invest plus add a lot of value for scaling them.”

“If you put an Israeli and an Indian in a room together, and they don’t understand the nuances of the culture, it can be tricky,” he says.

“In business, for example, Israelis are very direct and can be impatient while Indians will be diplomatic and take longer than Israelis to make a decision. I act as a bridge and guide my Israeli partners.”

Nevertheless, he adds, Israelis and Indians have a lot of mutual respect. The countries have friendly diplomatic relations and are keen to work with each other.

“It takes a long time to build trust. With the work we have done over the past five years, I am proud that we have been able to do so,” Agarwal says.