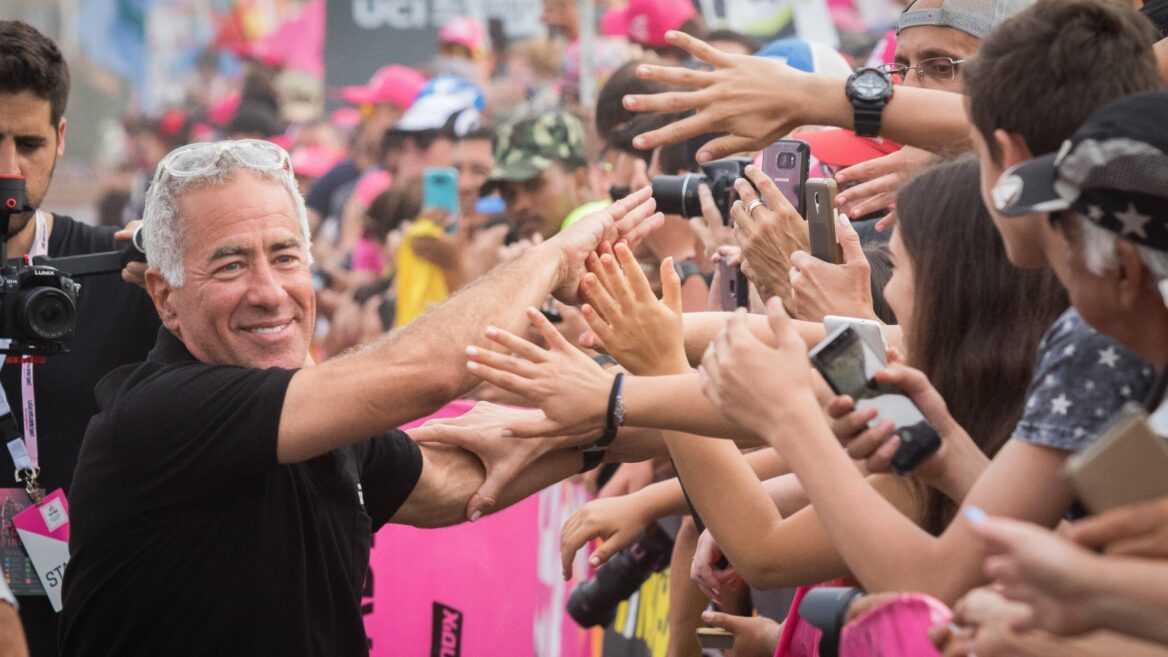 Sylvan Adams at the Big Start of Giro d'Italia road cycling race in Tel Aviv on May 5, 2018. Photo by Roy Alima/FLASH90

“Everybody loves a winner and nobody remembers who came in second,” declares Sylvan Adams.

“Chris is the most decorated cyclist of this generation. Having a rider like that on our team, which proudly rides with a blue-and-white banner under the name Team Israel Start-Up Nation, brings us positive attention that reflects on the whole country,” Adams tells ISRAEL21c.

“We are the most exciting team in the cycling world today, and cycling is the second most popular sport in the world next to soccer,” he points out.

Speaking of soccer, Adams arranged to bring superstar Lionel Messi (who has 230 million social-media followers) to Tel Aviv last November for a friendly between the national teams of Argentina and Uruguay.

“Chris Froome is the Lionel Messi of cycling,” Adams says. 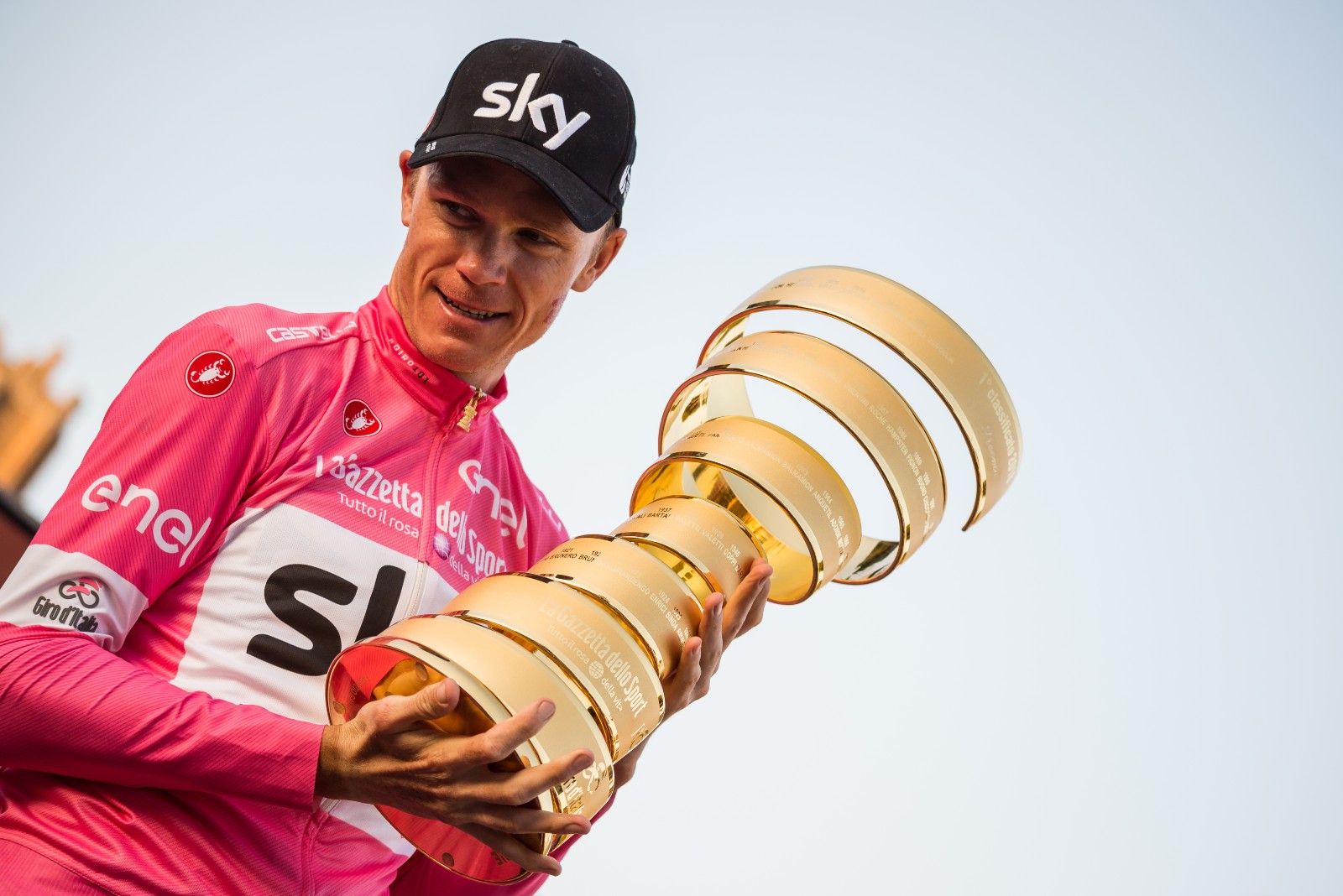 How did Adams woo Froome for Israel?

“He let it be known in an interview in a cycling magazine that he might consider leaving his current team. I would never have had the chutzpah to approach him had I not known this was a possibility.”

Adams says he felt a chemistry with Froome from their first conversation.

“He’s coming from a more corporate team and I told him our team is more of a family atmosphere and I think he liked that. After he asked a lot of questions, he decided riding for our team would be right for him. We signed him to a long-term contract, the idea being that he will finish his career with us.”

Covid-19 has caused a few hiccups in the cycling season that started August 1. Three members of Team Israel Start-Up Nation sat out races due to what turned out to be false positive tests for the virus.

However, Adams is optimistic that the postponed Tour de France will go forward as planned on August 29 and plans to be in Nice for the grand depart.

Adams moved to Israel in 2015. He says his proudest moment as an Israeli citizen was seeing 900,000 Israelis lining the streets in May 2018 for the Big Start of the 101st Giro d’Italia bike race. At his initiative, the Big Start took place for the first time outside of Europe. 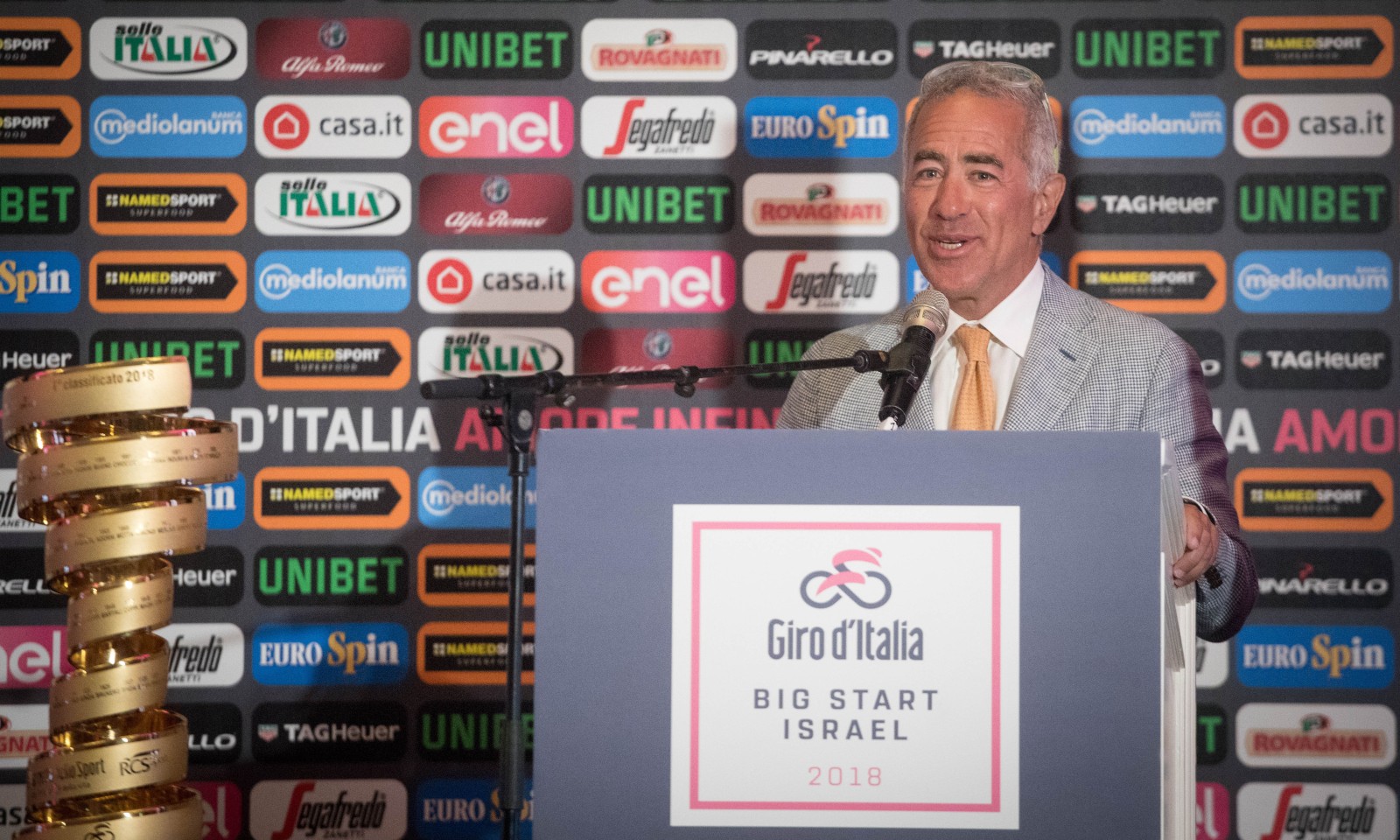 Sylvan Adams at the Big Start of the 2018 Giro d’Italia. Photo by Miriam Alster/FLASH90

“Seeing nearly a million Israelis coming into the street to cheer for something they had never heard of a few days earlier brought tears to my eyes,” Adams recalls.

“They were cheering me and I was cheering them. It was a three-day national group hug seen by one billion international viewers on TV.”

That year’s Giro d’Italia ultimately was won by none other than Chris Froome.

Vehicles that appeal to massive audiences

Adams has done much to advance Israel in the sports arena. 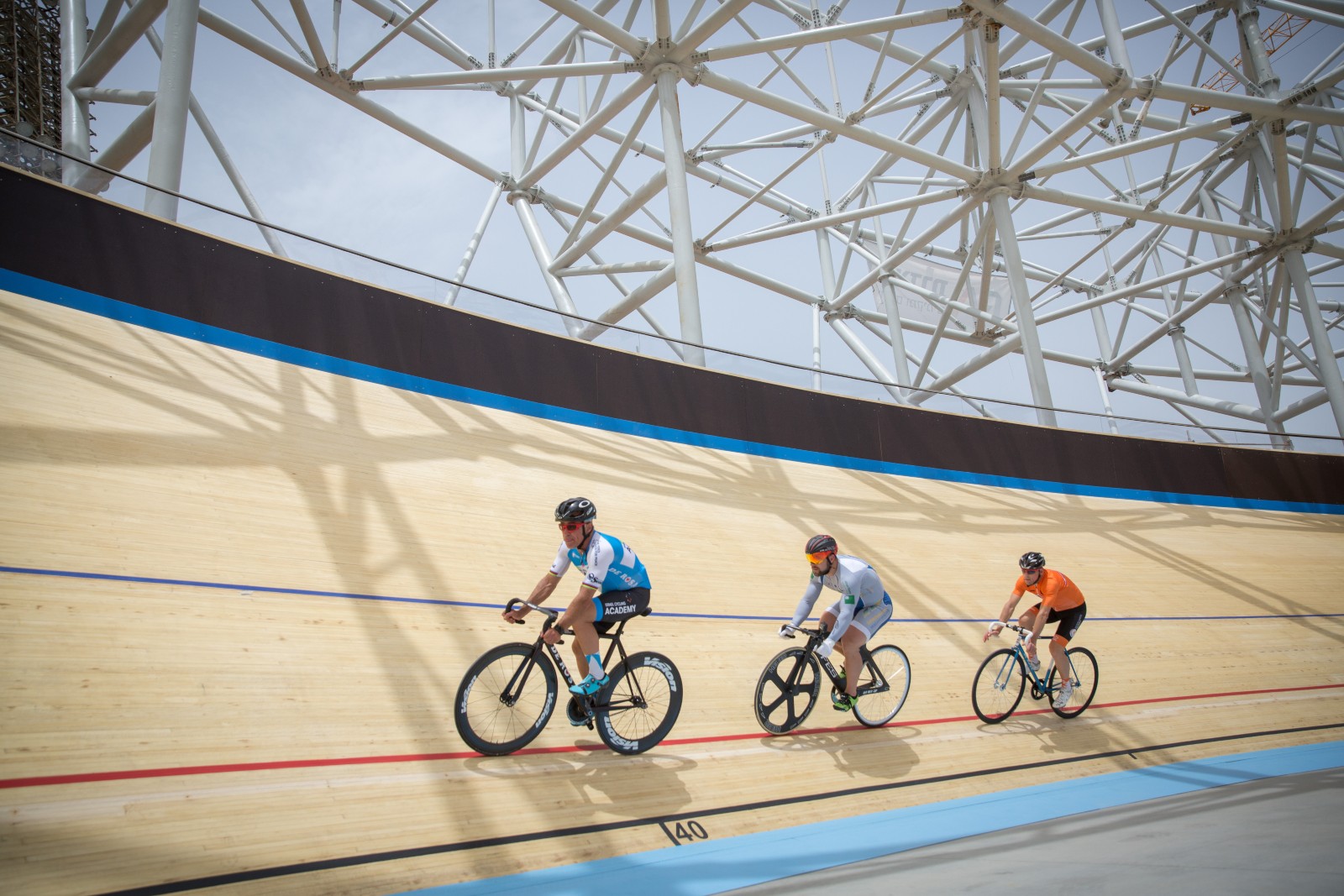 The Sylvan Adams Sports Center – Israel’s largest of its kind – was dedicated at the Jerusalem International YMCA in November 2018.

Last year, Adams founded Roy Nissany Formula One Management to support the development of Israel’s first-ever Formula One racecar driver. In 2020, he co-hosted the Tel Aviv Grand Prix of judo.

But sports are just one shining stone in Adams’ bigger mosaic.

“I look for vehicles that appeal to massive audiences as a way of showcasing Israel,” he says.

Adams arranged Madonna’s appearance at the 2019 Eurovision Song Contest hosted in his adopted hometown of Tel Aviv, voted the best Eurovision show of the decade.

He was a major donor to Israel’s ambitious SpaceIL moon mission, “which put a beautiful spotlight on Israel’s technological prowess.”

His name will grace the soon-to-be-completed children’s hospital/international pediatric cardiac center of medical-aid nonprofit organization Save a Child’s Heart at Wolfson Medical Center in Holon. 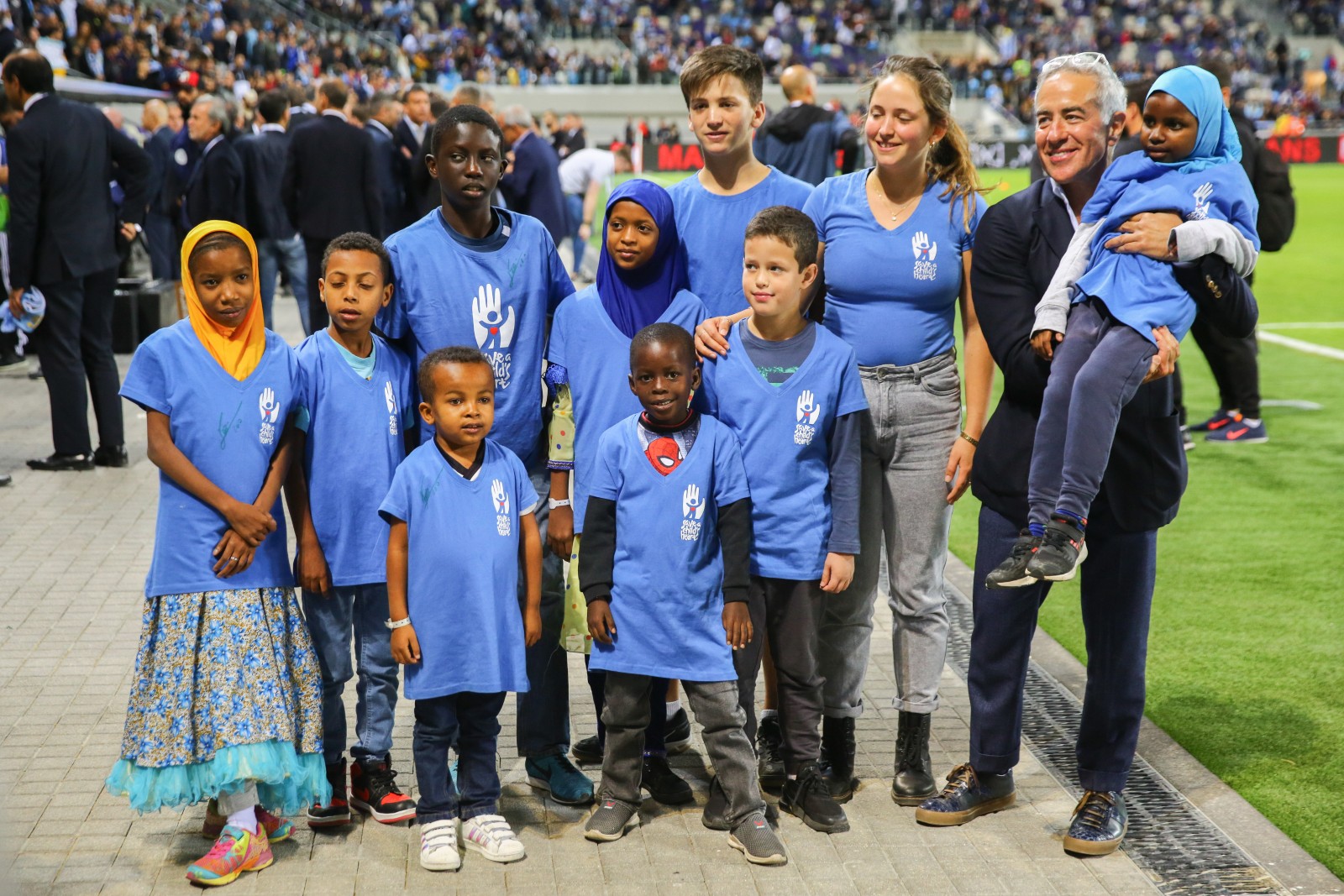 Sylvan Adams with children who owe their lives to Save a Child’s Heart, at the Argentina-Uruguay friendly soccer game at Bloomfield Stadium in Tel Aviv, November 18, 2019. Photo by FLASH90

The face of Israel

“The media covers Israel as a conflict zone. People don’t realize that in our daily life, Israel is an open, tolerant, diverse, fiercely democratic and — most importantly — safe country. This is something that makes an impression on first-time visitors because it’s not what they expect,” Adams says.

“My idea is to reach out to large audiences of ‘first-time visitors’ via their TV screens and show them this normal Israel, not through a history or geography lesson, in a massive way. I don’t have the time or patience to do this one person at a time,” he explains.

“Each of the things I do shows another facet of our beautiful country and appeals to a different audience,” he says, noting that last year’s Tour de France attracted approximately 3.2 billion TV viewers.

Adams says the flip side of showing Israel’s best face to the world is that it engenders national pride. He has high hopes for Froome in this regard.

“He won four Tour de France races and the record is five, so Chris will be vying to make history with us and win his fifth and record-breaking sixth Tour de France. He will perhaps be the greatest cyclist of all time.”

Asked about future initiatives, Adams will say only this: “I have many irons in the fire, several of which will definitely come to fruition. I’m just getting started.”