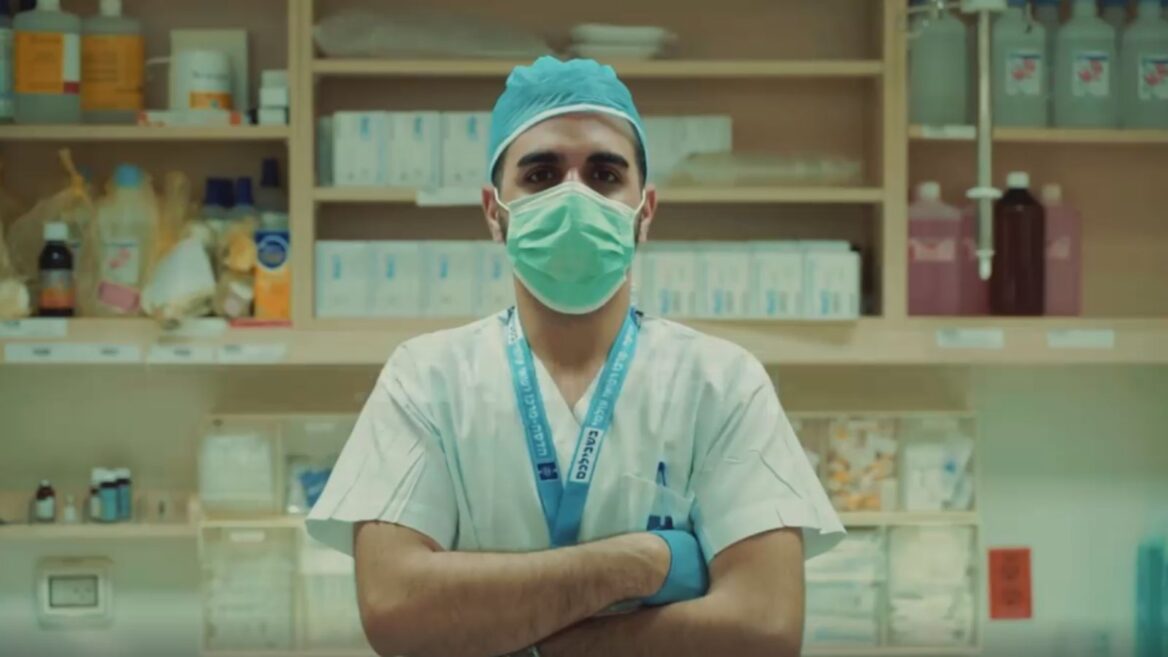 A snapshot from a viral video promoting the inclusion of Arab Israelis in society. Photo via Have You Seen the Horizon/Facebook

There’s nothing like a national crisis to bring to the fore Israel’s most viral moments. As Israel wages its battle against Covid-19, people locked down at home are turning to the Internet to find relief and humor, as well as an outlet for sadness and anxiety.

Some of the moments that have gone viral are hilarious, others are inspirational, and some painfully poignant. All, however, depict the strange, strange times that the world is experiencing. To catch a glimpse of the different moods gripping Israel, just scroll down below.

“If corona doesn’t kill us, remote learning will” is a feeling that is most definitely resonating with parents in Israel and beyond.

It’s also exactly what mom-of-four Shiri Koenigsberg Levy was feeling on the second day of her kids studying remotely from home. Fed up with the millions of messages she was getting from her children’s teachers and unable to help them with their music coursework, she got into the car to let off some steam, much to everyone else’s delight.

A teacher herself, she fumed and asked that educators take a step back, slow things down and realize that these are extraordinary times – before wishing everyone a lovely day. A corona classic.

This short video has everything corona virality needs: good music, people on balconies and a fuzzy feeling of hope.

It shows saxophone player Yarden Klayman and fellow musicians playing their instruments on the roofs of Tel Aviv, bringing joy and happiness to their neighbors – as well as people all over the world.

A personal favorite, this number is a stark reminder of what Seder night looked like just a few short weeks ago.

Comedian Yonatan Gruber put up a video that depicts his Sisyphean efforts to teach his mom how to use Zoom, and the 380,000 people who’ve watched it probably immediately sharedit on their family WhatsApp groups.

Funny as it is, it perfectly captures a major aspect of the coronavirus crisis and the technology leaps that were required from us all to keep in touch with our loved ones.

On a more serious note, the following video shows just how difficult this crisis is for so many people – in this case, self-employed workers and business owners.

Yuval Carmi, who owns a falafel stand in the southern city of Ashdod, tearfully told a TV news team of the economic devastation he’s facing and the absolute despair he’s in. With many other business owners in Israel are facing similar difficulties, his outcry resonated across the country and highlighted a difficult situation that needs to be resolved.

The corona crisis has spotlighted the huge contribution the members of Israel’s Arab community are making in the battle against the virus. Arab doctors, nurses, medical staff and sanitary workers are being applauded for their dedication and hard work. This viral video sought to serve as a reminder of their rightful place in society also in safer times.

Sometimes, all it takes is an earnest toddler to get us listening.

Three-year-old Oria from Ramleh in central Israel became an online sensation when she quite determinedly told her parents that it’s absolutely forbidden to venture outside because of the coronavirus. Not even to the mall or the Gymboree. This girl is going places.

‘IT IS EVEN FORBIDDEN TO GO TO GYMBOREE’: This adorable Israeli girl reminds her mom of the #quarantine rules .. “do you understand me? Thank you!” ☺️☺️☺️Via @the.israel.files Esta niña Israeli le explica a su madre que esta prohibida hasta ir a la tienda de Gymboree. Le dice “me estas entendiendo? “

Up until a couple of decades ago, every single Israeli kid knew who Tzipi Shavit is. An actress, singer and most of all beloved children’s performer, she was on TV screens and in theaters everywhere.

Over the years her public status declined, but during the coronavirus crisis she became an absolute hit on Instagram, proving that stardom doesn’t belong only to the incredibly young.

Her videos each garner dozens of thousands of views, showing just how much people are looking for a familiar, heartwarming face in the midst of all this madness.