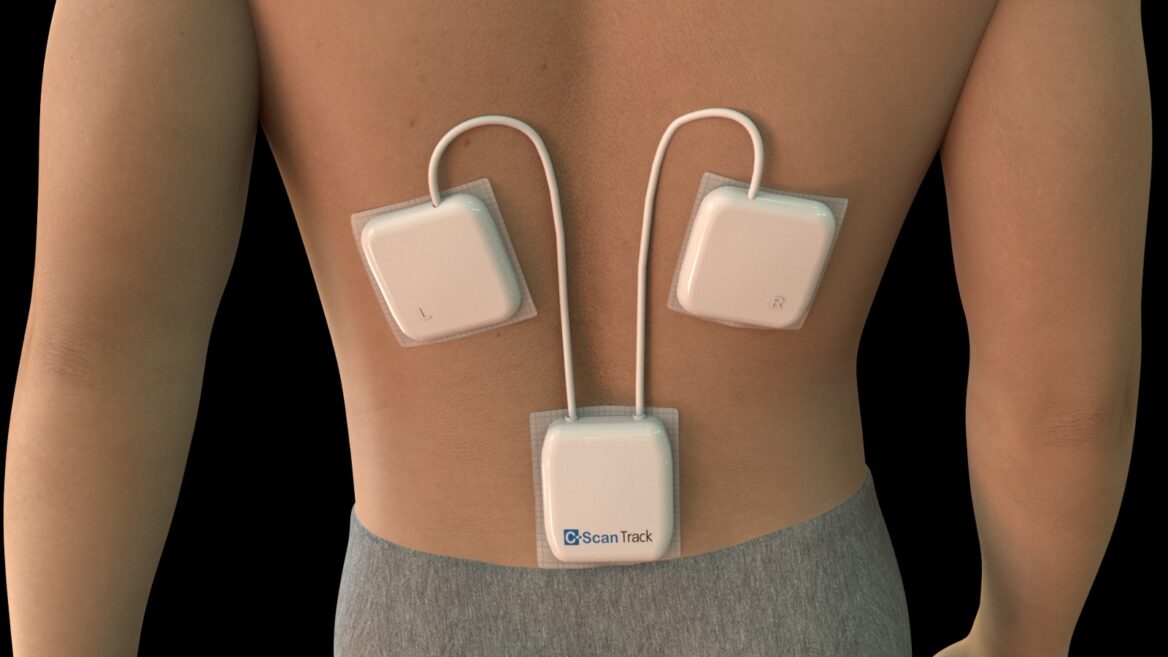 Every list of the greatest Israeli inventions includes PillCam.

PillCam is a video camera swallowed like a vitamin pill. It travels through the gastrointestinal tract, sending clear images to the physician on its way out of the body.

Invented by an Israeli electro-optical engineer and his neighbor, a gastroenterologist, the camera-in-a-pill endoscopy device signaled a worldwide diagnostic revolution. Capsule endoscopy has been FDA-approved and in use since 2001.

Given Imaging, the Israeli company that commercialized the PillCam, was acquired in 2013 by Irish company Covidien. Following Covidien’s acquisition by US-based Medtronic, the PillCam platform has been further developed through the Covidien Minimally Invasive Therapies Division of Medtronic.

Imaging the digestive system noninvasively is a lifesaving medical advance. In the United States alone, 2020 will see an estimated 147,950 new cases of colorectal cancer and 27,600 cases of stomach cancer. And even though everyone over age 50 is encouraged to have a colonoscopy to screen for cancer, approximately 1 in 3 people decide not to undergo this invasive procedure.

While PillCam started the ball rolling on noninvasive imaging, other Israeli medical inventors have innovated additional ways to provide images from inside the digestive tract.

Let’s look at some of these amazing devices.

The C-Scan system from Check-Cap aims to be the first-ever ingestible device to detect colon polyps without laxative preparation.

That is possible because rather than video imaging as PillCam uses, the C-Scan capsule takes ultra-low dose X-rays, which don’t require a clean colon.

The patient simply swallows the capsule along with one tablespoon of a contrast agent and fiber supplements with each meal. Over two or three days, the system collects data as it is propelled naturally through the gastrointestinal tract. During that time, patients continue their daily routine.

The system also includes an integrated positioning, control and recording system, and proprietary software to generate a 3D map of the inner lining of the colon.

Only if a polyp is found, which happens in up to 25% of cases, would the patient have to get a colonoscopy.

Approved in Europe and Israel, C-Scan is undergoing additional clinical studies with the aim of optimizing the system for FDA approval through a pivotal study next year in the United States – the first market targeted by Check-Cap.

Last December, the company announced results of a US pilot study at NYU Grossman School of Medicine in New York and the Mayo Clinic in Minnesota.

“The results of the study are promising, both in terms of safety and patient compliance of the procedure,” said Dr. Seth A. Gross, principal investigator of the NYU study.

“We are excited about the potential of the C-Scan System offering a patient-friendly screening option that could detect pre-cancerous polyps before they become malignant.”

Dr. Elizabeth Rajan, principal investigator of the Mayo Clinic study, said: “The availability of preparation-free options for colorectal cancer screening are appealing to patients and may indeed increase screening rates. Initial results from the pilot study are promising.”

Check-Cap CEO Alex Ovadia tells ISRAEL21c that the company is working toward the pivotal study while at the same time preparing a manufacturing infrastructure with partner GE Healthcare and exploring potential collaborations with strategic industry leaders. 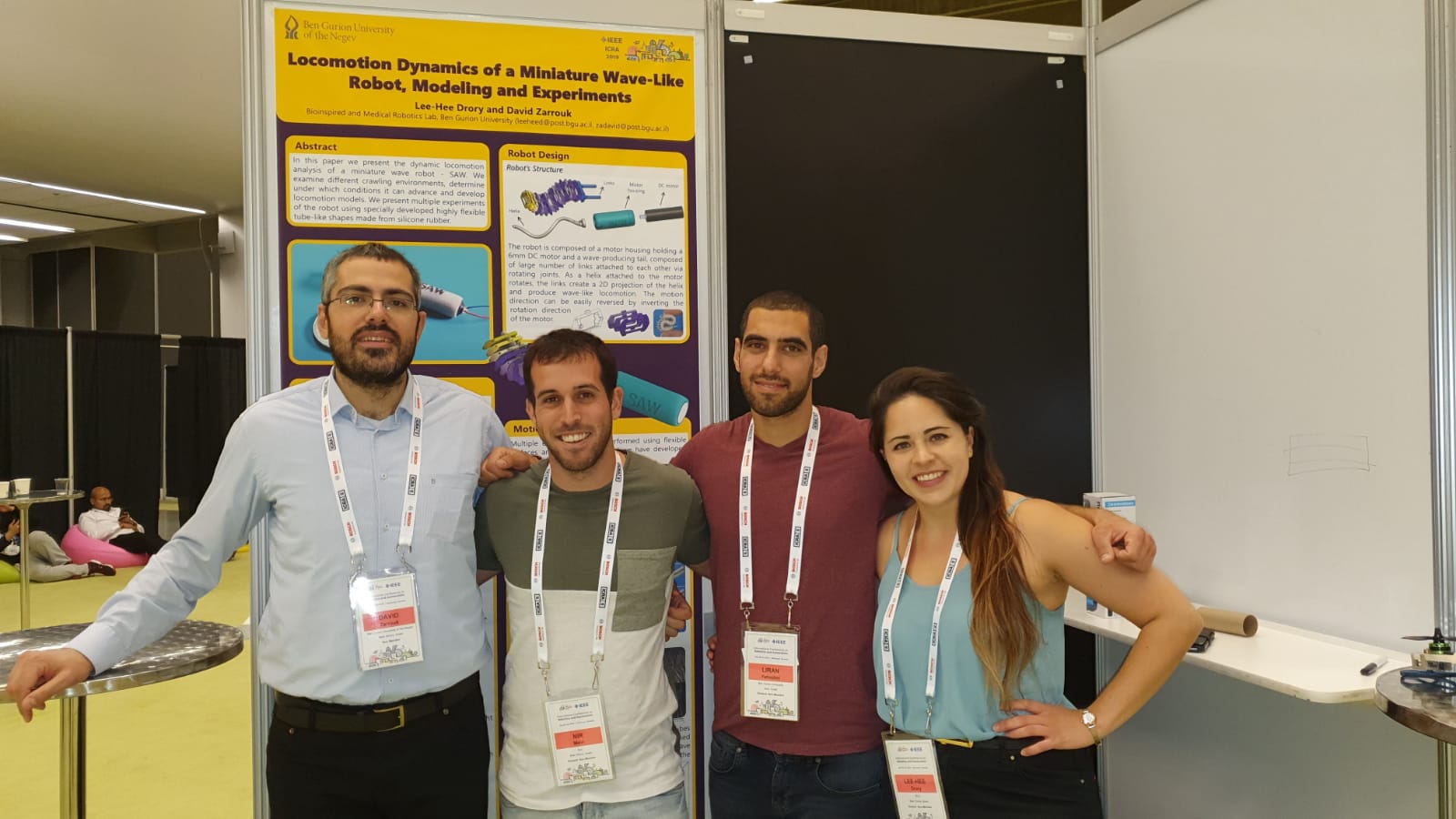 Prof. David Zarrouk, left, with students Nir Meiri, Liran Yehezkel and Lee-Hee Drori at the 2019 IEEE International Conference on Robotics and Automation in Montreal, where they presented a paper about the SAW robot. Photo: courtesy

While capsule endoscopy is a significant medical advance, the physician cannot control the navigation of the pill camera or which pictures it takes.

“You can stop it where you want to do further inspection, take more pictures and then continue,” Zarrouk tells ISRAEL21c.

“You could potentially drop medicine to a spot the camera shows you. And if you see something that needs attention you can stop the robot and check further with ultrasound or another technology, and you’ll know exactly where it is in the intestine. With a regular PillCam, it’s hard to know the exact position of a problem spot.”

SAW is still in development. “We’ve gotten it pretty small but not small enough to be swallowed yet because there aren’t electrical motors small enough,” Zarrouk explains.

“We don’t believe a motor will be invented that is smaller, so we hope to shrink it through other means, or redesign it longer but narrower so it’s swallowable.”

His lab also is improving the microbot’s traction and locomotion by attaching two together. Preliminary results using intestines from pigs are promising, he adds. 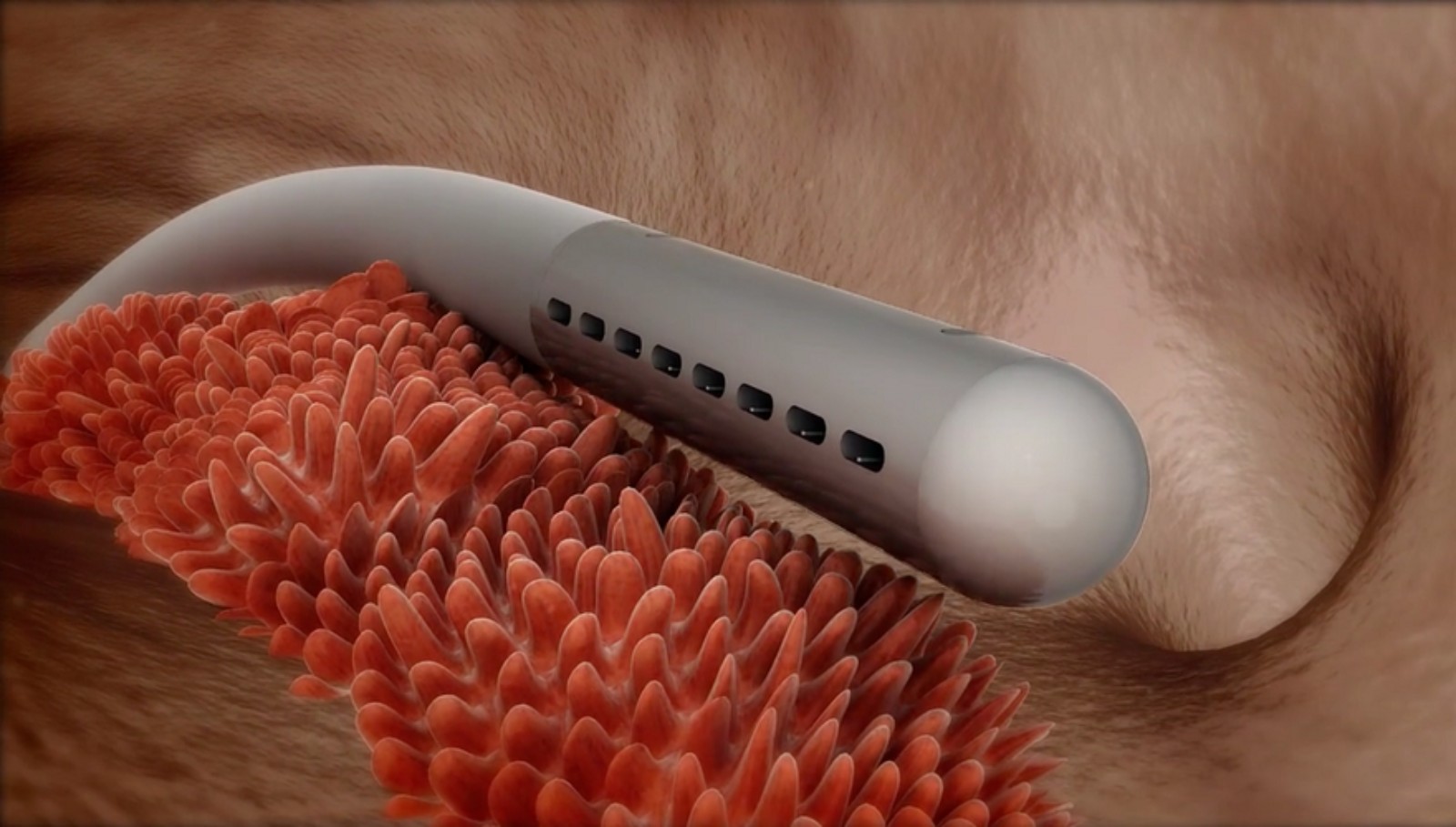 Both products originated in the lab of the company’s cofounder and scientific director, Technion mechanical engineering Prof. Moshe Shoham.

ViRob is an autonomous crawling micro-robot designed to be controlled remotely or within the body. Its miniature dimensions allow it to navigate and crawl through the tight spaces and curved passages of digestive tract, blood vessels or respiratory system for a prolonged time under a physician’s supervision. It can carry a mini camera, shunt or medication. 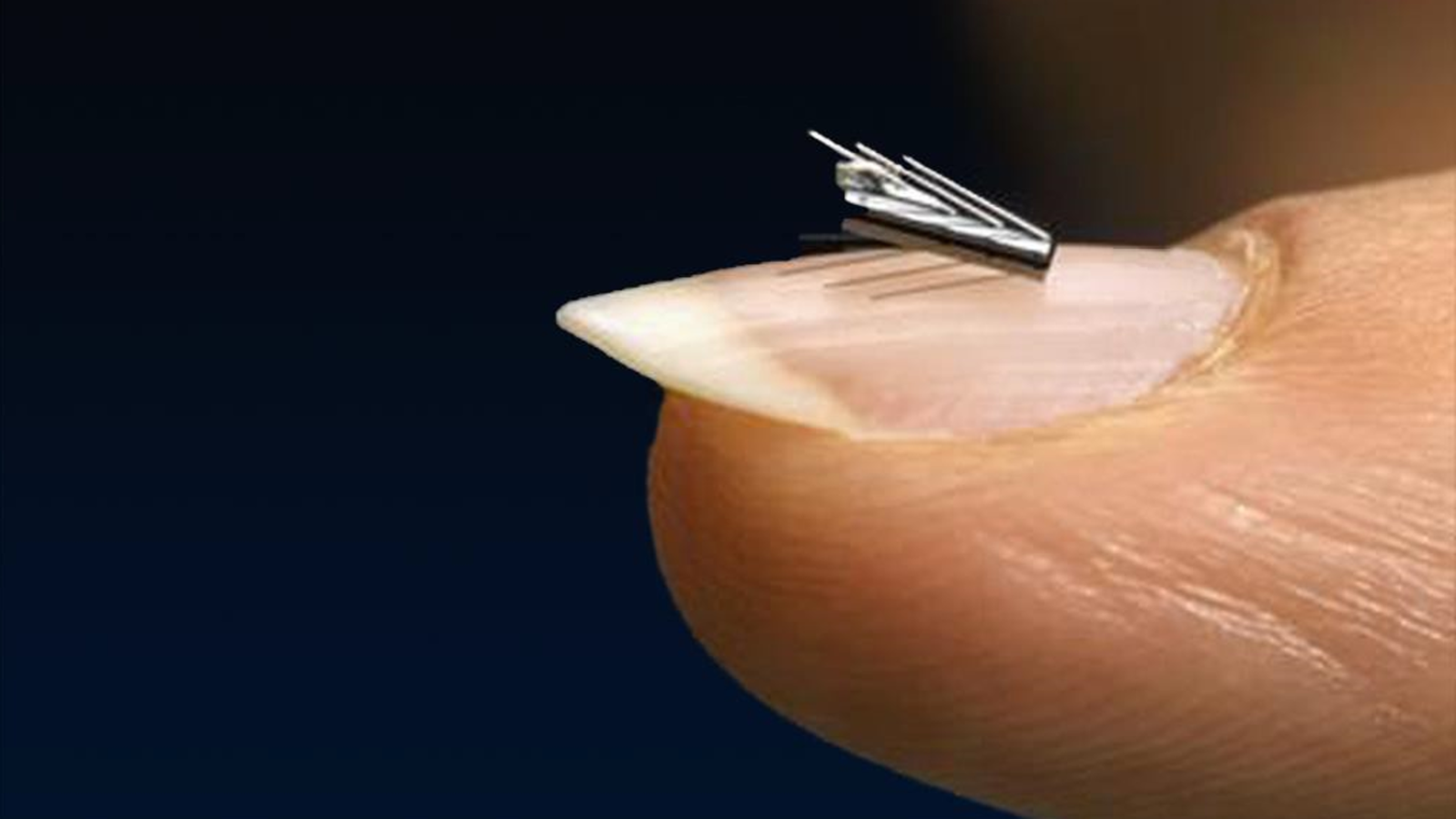 TipCAT is a self-propelled, flexible, semi-disposable endoscope providing “see and treat” capabilities within tubular body passages such as the colon, blood vessels and urinary tract. Its locomotion mechanism is designed for fast and gentle advancement through the body. This preclinical robot is collecting patents across the world as it heads toward regulatory approval.