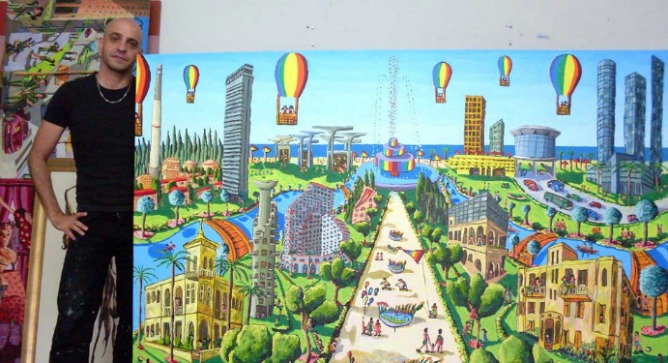 Red hearts adorn the boxer shorts of the two men holding hands in “Gay Love Black & White,” a self-portrait of the painter Rafael Perez and his former Eritrean lover. A single red heart balloon lifts them off the ground in childlike ecstasy.

The painting hangs in Perez’s studio in gritty South Tel Aviv, the same area experiencing tension between Israeli residents and African squatters from repressive countries including Eritrea. But all is peaceful in Perez’s world as depicted in vibrant, large canvases that radiate love – be it hetero, homo or patriotic.

The Israel Tourism Ministry used Perez’s images in its successful overseas promotion of Tel Aviv – which has an estimated 20 percent GLBT population — as the hottest new gay tourism destination.

“My art is a reflection of the entire gay community — people in the closet, mature love, gay families, gay political and cultural icons,” Perez tells ISRAEL21c in his spacious studio-slash-residence above a mechanic’s garage.

The studio isn’t open to the public. Though his paintings are exhibited in galleries and ad campaigns in several countries, Perez almost exclusively uses YouTube, Facebook and Flickr to display his works to the masses – with sometimes surprising results. 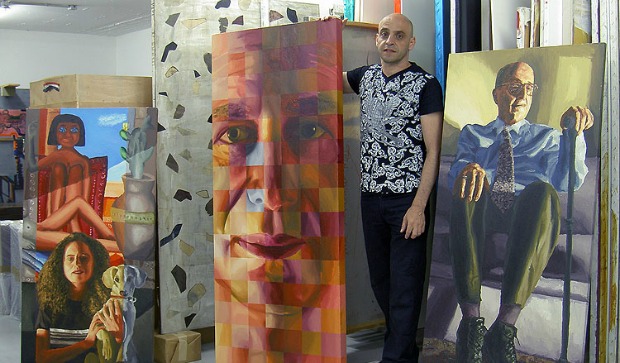 “Many people write to me after they see my paintings all over the world, even Arabic people in Syria and many other countries. They tell me, ‘We see your stuff and now we believe there could be love.’”

Type “gay artist” in Arabic into a Google search, and Perez’s paintings pop up first.

Perez was born in 1965 to a traditional Jerusalem family. His father exposed his three sons to the works of great painters, and his siblings became an industrial designer and a jewelry designer. Rafi didn’t pick up a paintbrush until he was 23, though he started drawing in an unusual venue much earlier.

“When I was 15 or 16, I started keeping a diary,” he says, flipping through small tattered volumes filled with expressions of feelings kept closeted for a dozen years. The Hebrew writing is hidden behind colorful sketches. 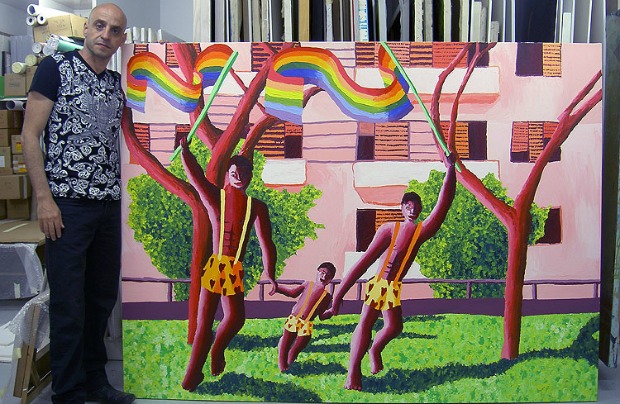 “I was afraid of my homosexuality. So I covered the words with drawings because I didn’t want people to see what I wrote,” he explains. “This was a very emotional period.”

Professionally, he worked for 15 years as a counselor at a youth shelter and as a preschool sports and arts teacher. During three years in a Beersheva art school, he honed his two styles: naïve and realistic. 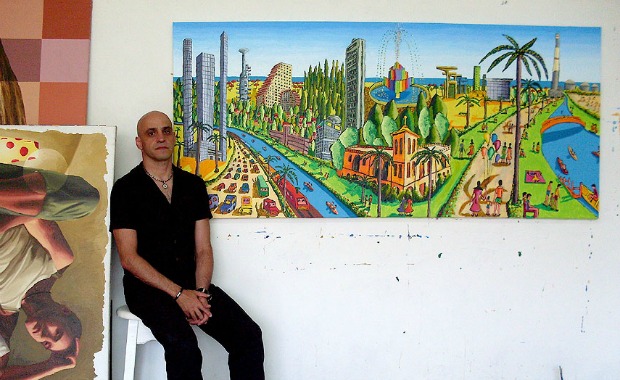 Perez lives in his studio in South Tel Aviv.

“My paintings helped me understand what I was feeling,” he says. “People say my artwork is very happy and they don’t see my conflict with homosexuality. The truth is, I was happy when working with the children, and that gave me the happiness you can see in my naïve style art.”

His works are grouped by series – men and women, men and men, gay families and also spherical paintings portraying Tel Aviv and Jerusalem as multicultural centers of the planet. 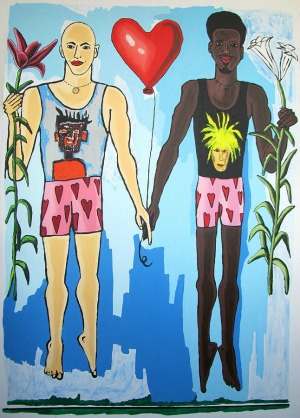 “All my paintings deal with realistic stuff from my relationships. When I finish a series I don’t return to it. I paint from my psychological autobiographical story and when I’m not in a certain period anymore, why should I paint about it?”

One of his newest series, characterized by “Gay Love Black & White,” celebrates his much-publicized 11-month relationship with an Eritrean refugee. Another imagines Tel Aviv as an Amsterdam-like magnet for nightlife. But more attention today is attracted by the vivid gay family series he started in 2000, inspired by babies born to his heterosexual twin brother and to his ex-girlfriend.

“I became involved with the upbringing and care of the babies, and this prompted me to start painting situations that involve gay families,” says Perez. “I was one of the few painters that dealt with this issue at that time.”

These paintings, as well as a series from 1999 anticipating a “golden age” of gay life in Israel’s second largest city, were ahead of their time and came to symbolize an open and growing trend in Tel Aviv and elsewhere. 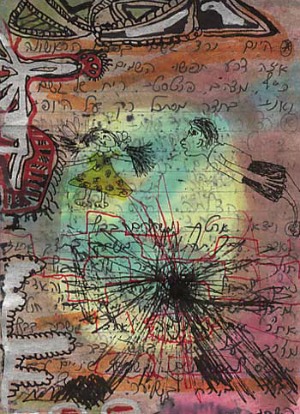 Perez drew over his teenage diaries to hide his homosexual thoughts.

Perez was the sole artist chosen for a tourism campaign featuring eight Israelis from the fields of sports and culture, which is splashed across London on billboards and print media. He says this is a primary reason Tel Aviv’s Gay Pride Parade has attracted more than 100,000 visitors in the past two years.

He sees this as good business. “Gay tourists invest more than heterosexual tourists, spending a lot at bars and restaurants,” Perez says. They also help keep him in business. “Most of my customers invest in art,” he says. “I owe my life to the gay community.”

Though his mother still harbors hopes of her son getting married one day, Perez epitomizes the strong GLBT flavor Tel Aviv has acquired.

“My agenda is about gay life — that it’s okay to be gay, to live your life, to find your love,” he says.