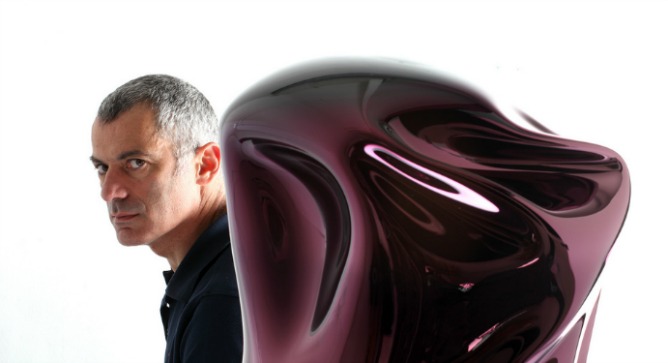 Arik Levy with a sculpture he calls SolidLiquidLarge. Photo by Ian Scigliuzzi

A rep from a large South Korean toymaker contacted Israeli-born artist Arik Levy in Paris recently with a business proposal.

The phone call puzzled Levy, he tells ISRAEL21c. True, his name is legion in areas ranging from furniture and lighting design to environmental sculpture, photography, painting and filmmaking. But toys?

“They explained that they went to a Buddhist monk to ask with whom to work for toy development, and the monk said that the Jewish tradition has a special beauty in it and a way of interacting with kids and families, so they should work with an Israeli Jewish designer.”

Although a bit stunned, Levy couldn’t argue with that assessment. Toys aren’t his expertise, but he has long believed that his Israeli Jewish identity contributes to his versatility.

“When you are part of a group of people in a state of distress and survival, you are forced to have a certain kind of creativity and be able to reinvent yourself nearly daily,” Levy reflects. “Jews throughout history, and Israelis, have a special ‘spring’ that permits us to rebound at every moment. We do what we always did, but do it differently in order to exist in the next second.”

Having started out designing surfboards, wetsuits and surfboard leashes in his native Tel Aviv, Levy has found success in an array of genres. Three separate websites showcase his work in different forms of art, industrial design and social design.

So taking on yet another challenge in yet another field does not daunt the 49-year-old father of three, who jokes, “I specialize in not specializing.”

“I work on different things simultaneously,” Levy explains. “The more I have to do, the better I do it. It’s only inspiring and fruitful to let my brain work in superimposed layers of information.”

During November alone, Levy’s work was spotlighted in three shows: “Experimental Growth” at the Bisazza Foundation for Design and Contemporary Architecture in Italy; “Genetic Intimacy” at the Alon Segev Gallery in Tel Aviv; and “Nothing is Quite as it Seems” in Paris, a retrospective and prospective on Levy’s creative life, starting with his first group sculpture show in 1986 at the Jaffa Port. 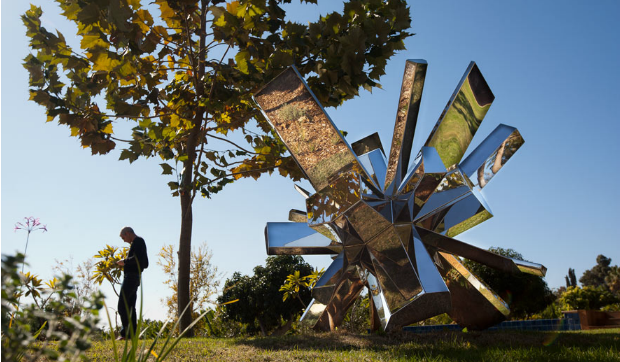 Levy with his stainless steel Rock Growth, in a private collection in Israel. Photo by Shauli Landner

The Paris exhibition coincided with the publication of his coffee-table book, Out There, giving a glimpse of Levy sculptures installed in the homes and gardens of private patrons.

“Exhibitions are ephemeral — you don’t have a way of enjoying the immense attention that goes into the work after the exhibition is over,” he says. “I have had the pleasure of getting so many commissions by private collectors in Israel, France, Holland, Switzerland, the US, and so on, which paradoxically is even worse than an exhibition since so few people get to see it. A book allows me to share that work in a big, visually breathtaking way with so many more people.” 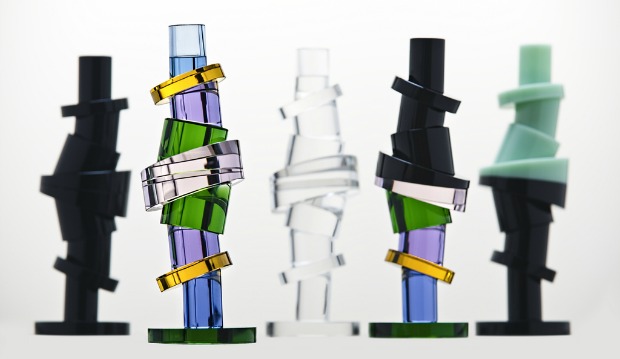 At 25, Levy was running a surf shop and graphic design studio in Tel Aviv when his girlfriend departed for Geneva. Rather than lose her, he forfeited his spot at the Bezalel Academy of Arts and Design in Jerusalem and looked into art schools in Switzerland. He discovered that California’s Art Center of Pasadena was opening a satellite in Geneva, and he sent his girlfriend there with his portfolio.

“I told her to tell them I am coming. Not to ask — to tell. I used all my Israeli chutzpah and I got accepted.”

The school not only welcomed Levy but also helped him deal with his severe dyslexia. He graduated with distinction in industrial design in 1991. After some additional travels, he landed in Paris permanently. 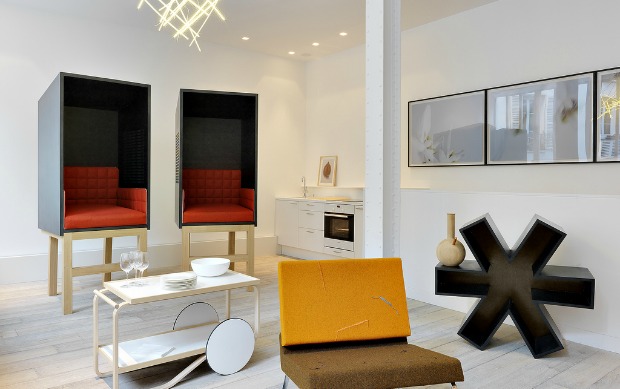 This Levy furniture grouping, Contemporary Domestic Confessional, is found at the Slott Gallery in Paris. Photo by Florian Kleinefenn

“The decision was not to leave Israel as much as to follow my heart. I had a great time being a beach bum and earned enough money for a comfortable life, but the heart went and I followed. Then I started making my way in Paris, and Paris became home.”

Along the way he picked up a facility with French, Italian and English. His children hear French from their mother and Hebrew from their father. They visit Levy’s parents in Tel Aviv two or three times a year.

In a sense, he grew up with Tel Aviv. His family’s apartment at Arlozorov and Weizmann streets – a major junction today – was then only a hop and a skip from sand dunes. “We literally lived the transition from town to city.” 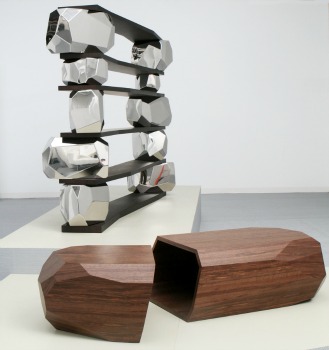 RockShelves and RockSplit are Levy’s designs in the HSBC Private Bank Designers Lounge at the Miami Beach Golf Club. Photo by Richard Patterson

Levy liked to visit his grandfather’s electrical appliances shop, where he was encouraged to make small machines after watching how irons and televisions were taken apart and rebuilt in the repair workroom. Grandpa was a tough critic, responding to the boy’s ideas with “a slap and a piece of chocolate at the same time.” This was a good life lesson, he says today.

“At the beginning it wasn’t about making a career. I was not even aware of the word ‘design’ and I was just making things to improve my everyday life,” says Levy.

But after that 1986 exhibit at the port, he began seeing things differently.

“Having the spirit of an artist and creator, I thought it was a much better choice financially to survive through design than from being a surfer or a barman, which I also did when I was 17. Design is interesting emotionally, physically, socially. You can change the world to a certain degree.”