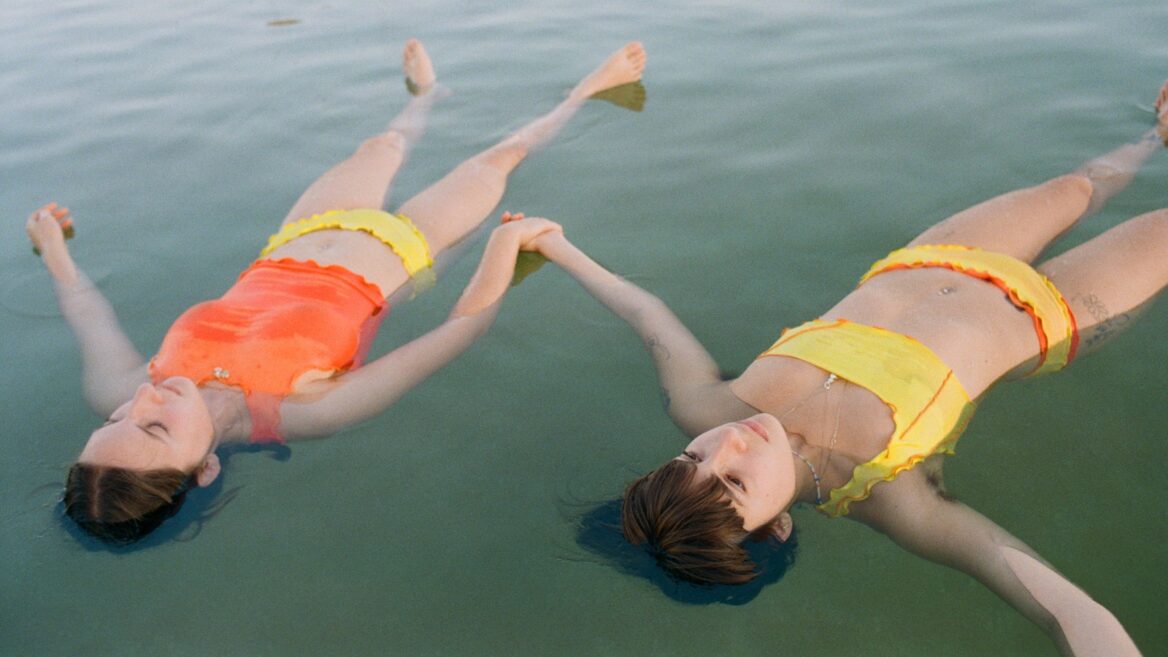 Michal and Maya wearing swimwear by Sherris at the Dead Sea. Photo by Mayan Toledano

Her spandex suits, recently featured in Vogue, are fun, flattering and above all functional.

“I just wanted to do something different — something comfortable and non-sexualizing,” Sherris tells ISRAEL21c. 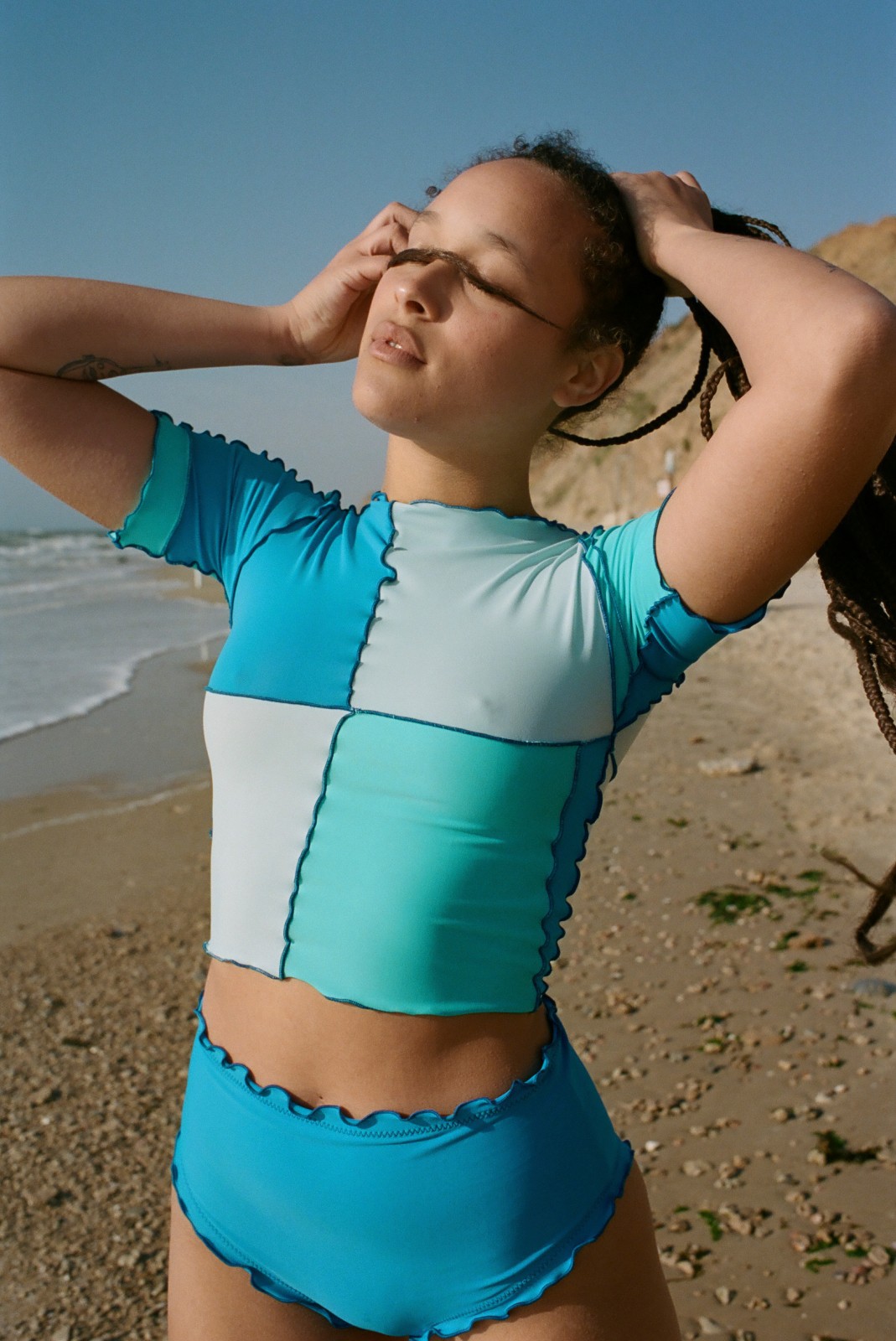 “Women in swimsuits are always sexualized and that bothers me so much. Nobody looks like those models,” says the 32-year-old graduate of Parsons School of Design.

“I want to make swimsuits women would feel good in, be able to do water sports in, and feel beautiful in without just wearing a string.”

Many of her brightly colored creations are edged with feminine ripples reminiscent of moving water. Her designs for women’s sizes XS to XL are neither overly modest nor overly revealing.

Sherris’ distinct style emerged from her childhood on Kibbutz Yahel in southern Israel.

In that small cooperative village, her clothing was like everyone else’s, washed in the communal laundry and kept in a communal closet. Each piece was marked with her number, 23.

“From a young age, I wanted to look different and wear other things, not the stuff that I had,” she says. “I think the kibbutz brought that out in me because I didn’t go shopping for clothes.” 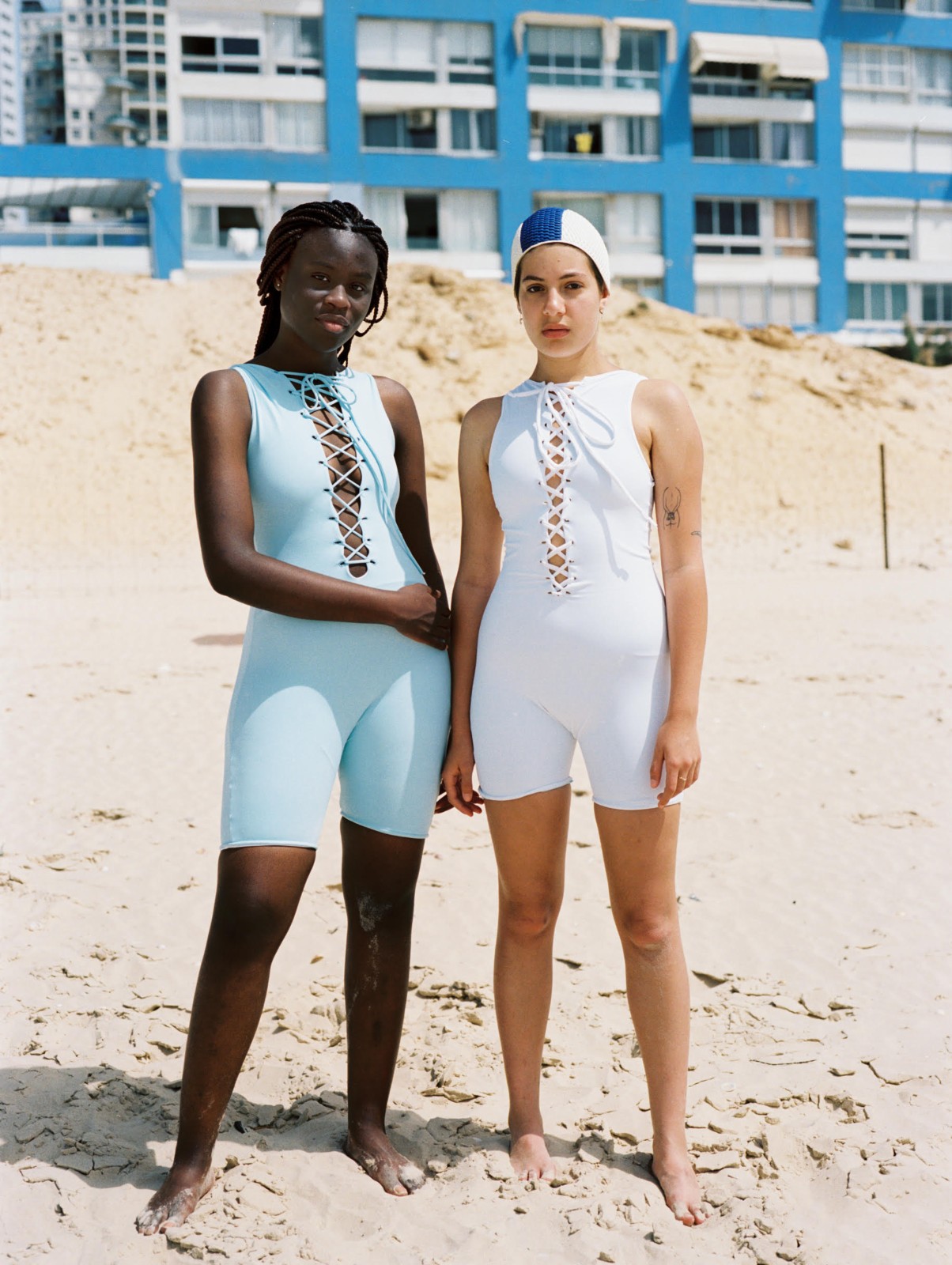 Although her independent approach to fashion “contradicts everything that a kibbutz represents,” she says, her mother is a painter and encouraged creativity.

“I started drawing at age seven, and I majored in fashion design in my high school. I got a sewing machine when I was very young. I sewed everyday; that’s all I wanted to do. I loved outfits and dressing up.”

Her mom helped her build a portfolio to submit to design schools. Parsons offered her a full scholarship, and so she moved to New York after finishing her military service at age 21. 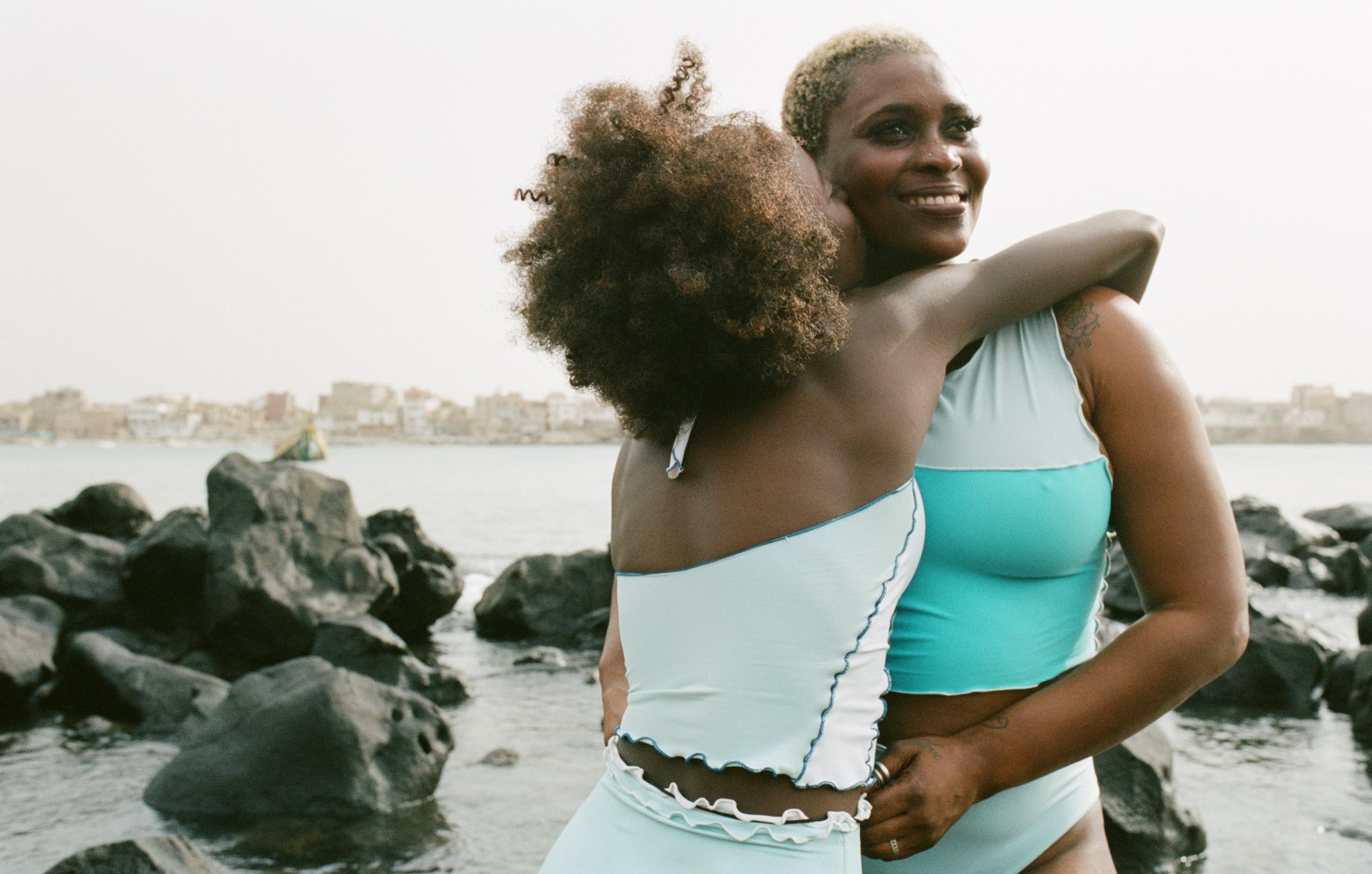 At Parsons, she befriended another talented Israeli, Mayan Toledano, today a New York-based photographer and producer whose clients have included Nike, Gucci, Coach and American Eagle. Toledano photographs all of Sherris’ work.

Their shared first name, though spelled differently in English, is Hebrew for “wellspring.”

“I didn’t plan on launching swimsuits,” Sherris says. “But ma’ayan means water so I naturally connect to water.”

A wool swimsuit was part of her senior-year concept collection. She switched to spandex and began designing functional suits under her first label, Babes in Bathers, for the women’s swim team of Columbia University. This line got the attention of The New York Times in 2016.

“I wanted to cherish the body in the sport,” she says. “Every season I have athletes try my swimsuits on and give me feedback and I design with that in mind.”

Since then, the label was renamed Sherris, and the designer has also launched collections for men and children.

Sherris and Toledano began traveling the globe documenting Sherris-clad swimmers in film and photography. The video below was shot in Bangalore. 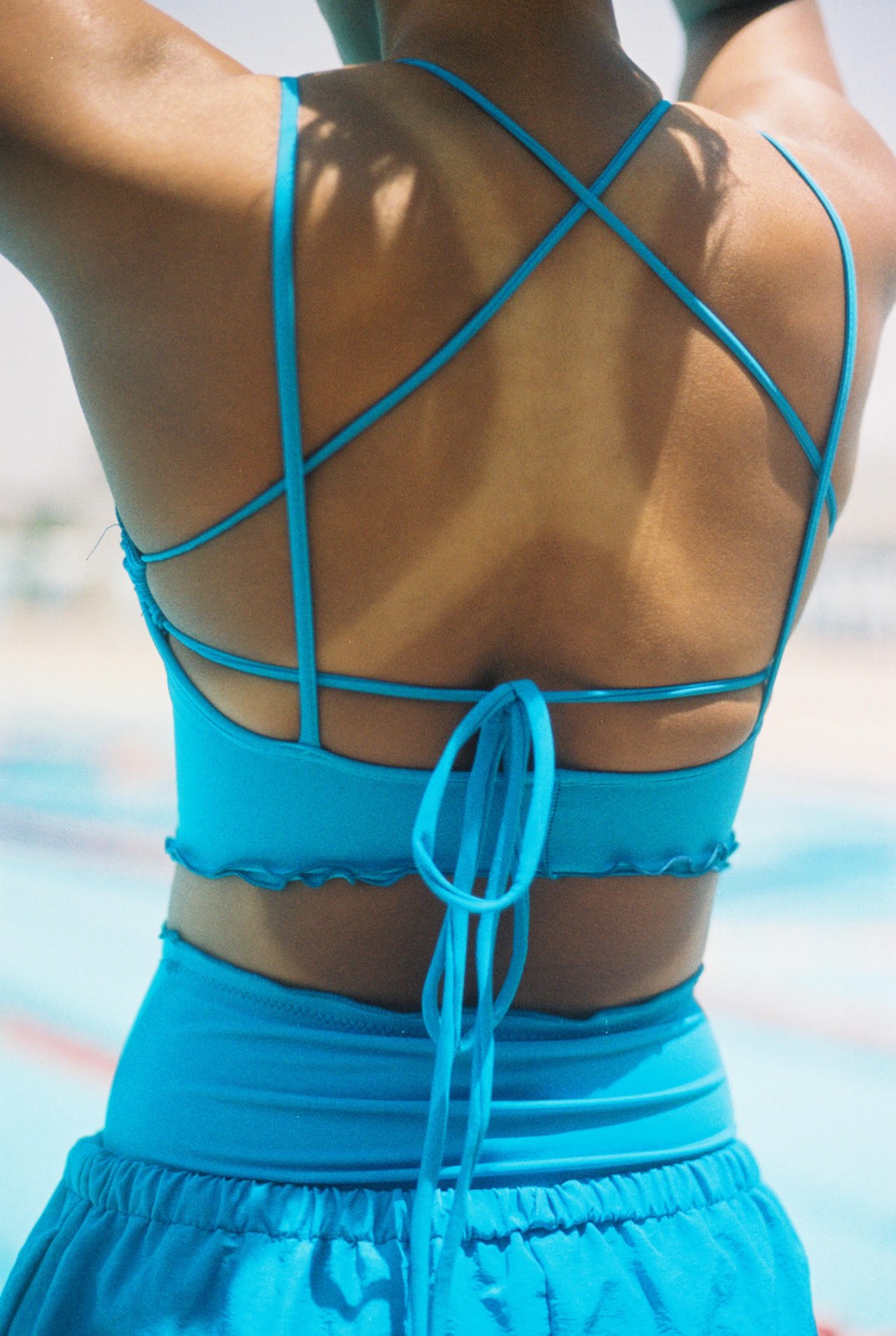 “Last year, Mayan and I talked about where we were going to shoot next. We wanted to document our own families and friends in Israel because we’re both so far from them and we miss them.”

Some pictures were taken in Israel and in Dakar before the coronavirus pandemic grounded the duo.

They continued the project in the New York area, photographing friends and friends-of-friends wearing Sherris swimsuits in different settings. 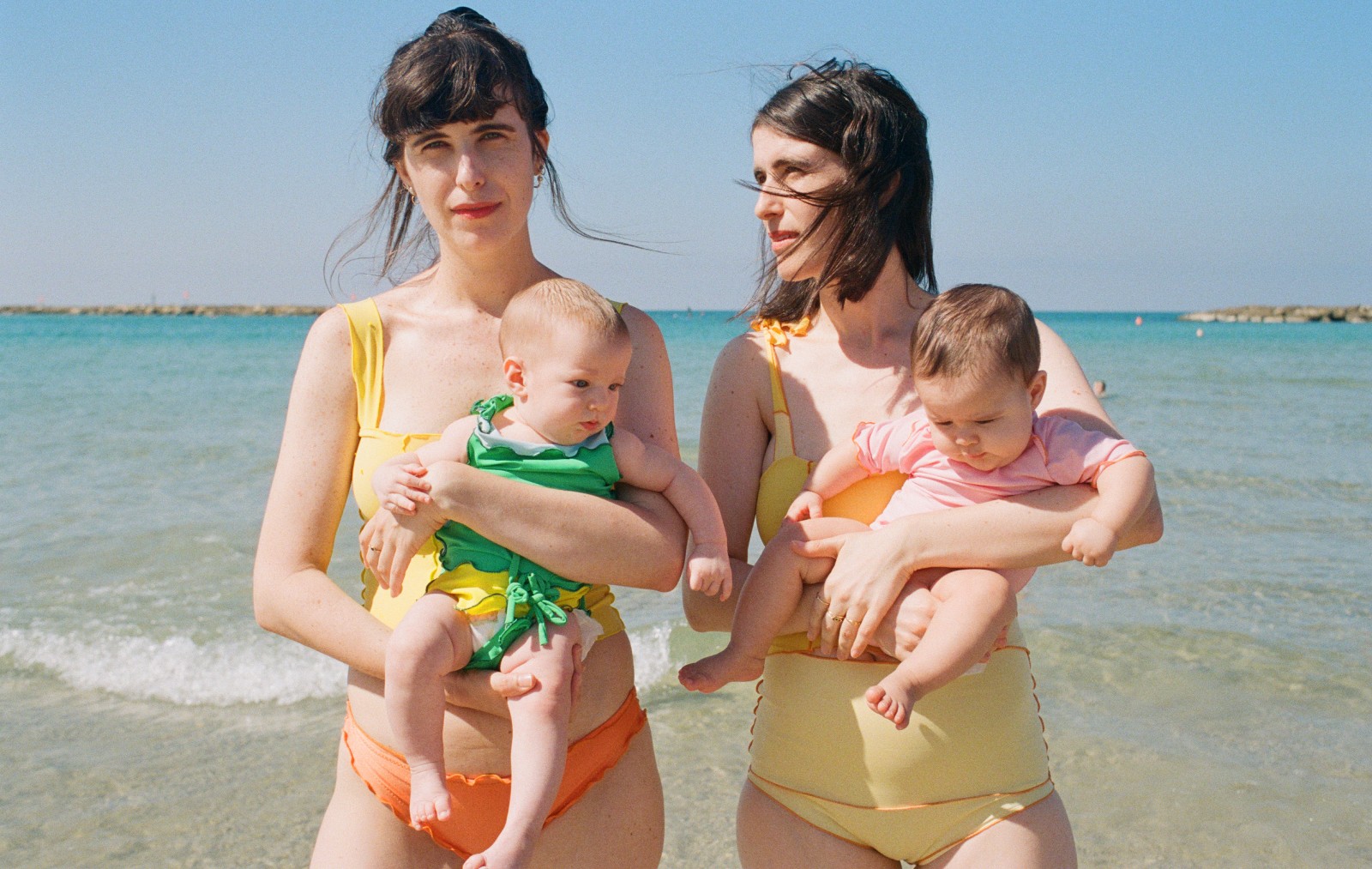 Twins Nira and Shira (and their babies, Sasha and Leila) in swimwear by Sherris at Geula Beach in Tel Aviv. Photo by Mayan Toledano

Ironically, Sherris herself is camera-shy and strongly prefers not to appear in publications regardless of what she’s wearing.

The pandemic has largely confined Sherris to her apartment on the Upper West Side of Manhattan.

Ordinarily, she does the patternmaking and development but outsources the sewing locally. “Now I’m grading, marking, cutting and sewing everything from my bedroom,” she says.

“And that’s why it’s all patchwork now because I’m working with the fabrics I have on hand. I’m thankful I have the background so I can pull through a collection all by myself.” 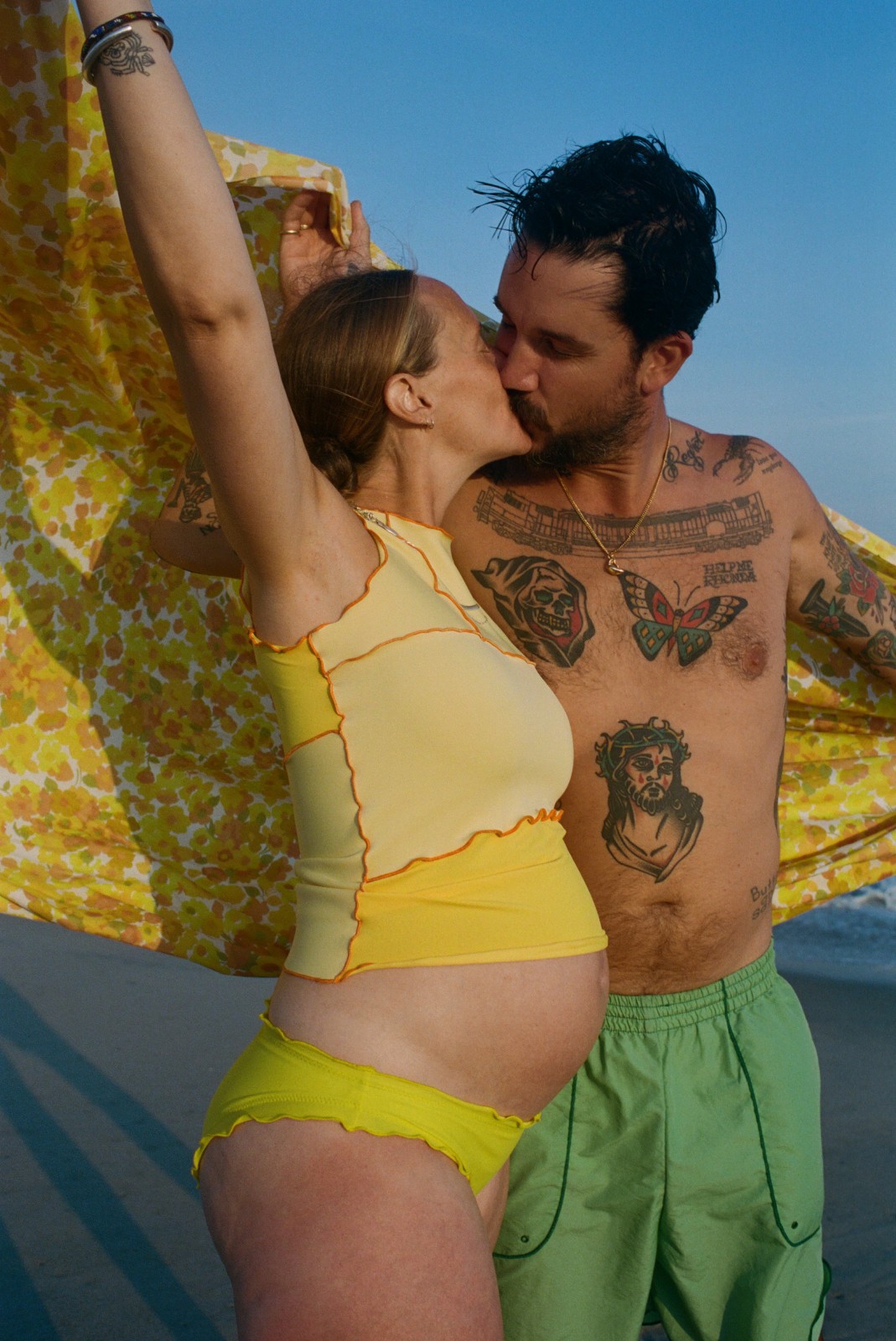 Sherris majored in sustainable fashion at Parsons and is slowly transitioning to using recycled spandex. She is also designing coats and sweaters for next season.

“Every year I sell in different stores. Café Forgot in New York has been stocking me since November. But a lot of stores are now closed so I mostly sell through my online shop.”

Sherris hopes to open a store on Tel Aviv’s Sheinkin Street. For now, Israeli customers can order from a special page on the website and their purchases are shipped domestically from Kibbutz Yahel.

After more than 20 years in New York, Sherris says she still misses the language, the food, the weather and of course her family and friends. “I love Israel. I think of coming back all the time,” she says. 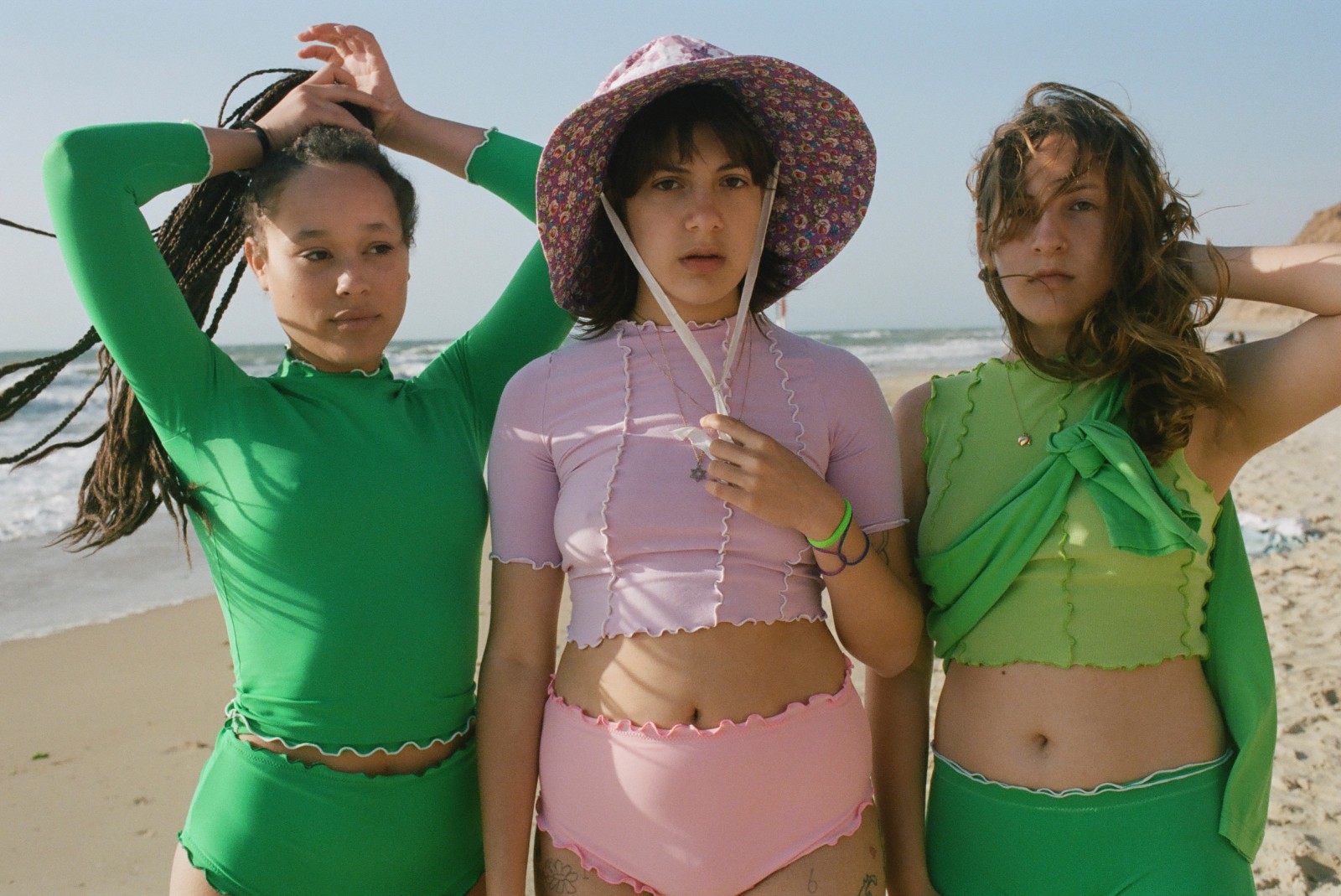