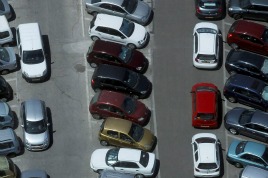 In the middle of a sentence, the person I was interviewing by phone suddenly exclaimed, “oooh, a parking spot, I gotta go, sorry” and hung up. Though I wouldn’t be able to use a half-finished quote in an article, I totally understood her sense of urgency. She was in Tel Aviv.

Parking in downtown Tel Aviv – like in most bustling cities — is a nightmare.

In fact, those of us who live here know that for all the city has going for it – culture, art, beaches, dining, architecture — there are two major problems with being a Tel Aviv resident with a car: One, there’s no parking and two, there are no left turns.

A new wave of videos poking fun at the lack of parking options in Tel Aviv has hit the online community with great success.

The latest, a YouTube video that shows a young couple saving a parking spot with a fake disabled parking permit, really put the parking conundrum back in the spotlight. Though it seemed like a homemade video at first – and one that fielded a lot of negativity due to the misuse of the decal — the local Channel 10 reported it to be an advertisement for a Mini Minor car.

The above video racked up hits because so many people could identify with the desperation of finding a parking spot in the city.

To find out if Tel Aviv residents had the right to complain, ISRAEL21c asked the municipality for the most updated parking figures. It turns out that there are 257,300 cars registered in Tel Aviv. An estimated 500,000 cars enter the city every work day from other parts of the country.

Here’s the catch: There are just 35,000 legal municipal parking spots in Tel Aviv (excluding residential and commercial parking spaces). And that makes it easy to understand why the city handed out 840,000 parking tickets in 2012.

The most popular parking mishap in the city, by far, was caught in a video shot by security cameras of a woman’s car parked legally on a Tel Aviv street. The car was towed after city workers painted a handicapped sign around the parked vehicle.

The driver posted her Chelm-like fiasco on Facebook and within days not only received an apology from City Hall, but saw the video of her ordeal plastered across social media and mainstream media (internationally as well).

There’s a great video clip ad for parking in the city put up by justpark.it – a startup that matches people with empty parking spots and those seeking parking. It’s in Hebrew, but the message is easy to understand.

And a group of friends even made a comical video about parking in the White City. The five-minute clip has English subtitles and really hits home with anyone who has ever been in a rush and just cannot find a place to leave the car.

If you’ve decided to join the driving force of Tel Aviv, here’s a tip all locals use: send your passenger out on foot to find and save a spot until you circle around.

Keep in mind that one of the mottos of Tel Aviv is the “city that never sleeps.” For drivers, unfortunately, that truly is the case. One of the reasons I left central Tel Aviv was that circling for over an hour at night while seeking out a parking spot just wasn’t the kind of routine I wanted to maintain.