The 10 most iconic archeological sites in Israel

In Israel, peeling back the layers of history is a never-ending pursuit. Findings from thousands of years ago are preserved for the public to explore.

Sitting at the crossroads of the ancient world, Israel is an archeologist’s dream. Peeling back the layers of history here is a never-ending pursuit.

Excavations by the Israel Antiquities Authority with local and international experts are constantly turning up new clues to ancient civilizations.

And it’s quite common for casual hikers to contact the IAA about valuable antiquities they’ve stumbled across. Click here and here to read about kids finding rare artifacts.

Israel has invested heavily in enabling safe access to dozens of archeology sites for the public. Many of them have been turned into national parks and UNESCO Heritage Sites.

Ten of the most iconic Israeli archeological sites are described below. In a future article, we’ll look at 10 lesser-known sites where impressive discoveries have been made.

Archeological digs and conservation projects reveal the history of this capital city established by King David more than 3,000 years ago.

The most visited place in Israel, Jerusalem has been continuously inhabited for some 5,000 years. So it’s not surprising that hardly a month goes by without major archeological news here. 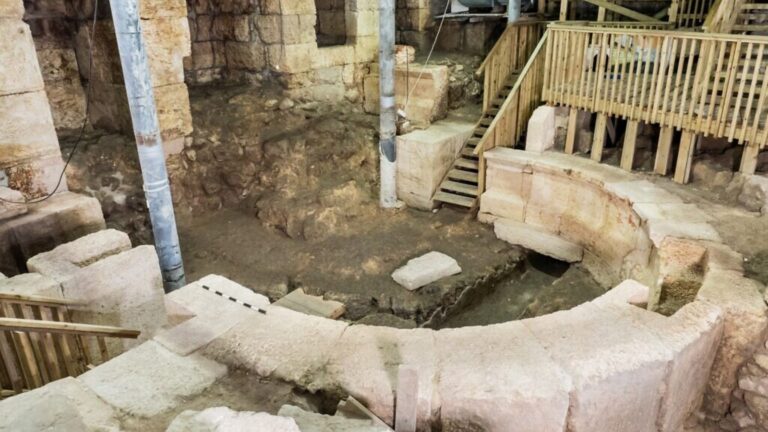 Although important discoveries are also made outside the Old City – for instance, underneath the Jerusalem International Convention Center — the most famed archeological heritage sites are in the Old City area and shed light on life during the First Temple period (1000-586 BCE), Second Temple period (516 BCE to 70 CE), Byzantine Muslim period (4th to 11th centuries CE) and Crusader period (1095 to 1291 CE).

Recently, cutting-edge micro-archeology tools were used to correctly date the construction of Wilson’s Arch, which supported one of the main pathways to the Second Temple. 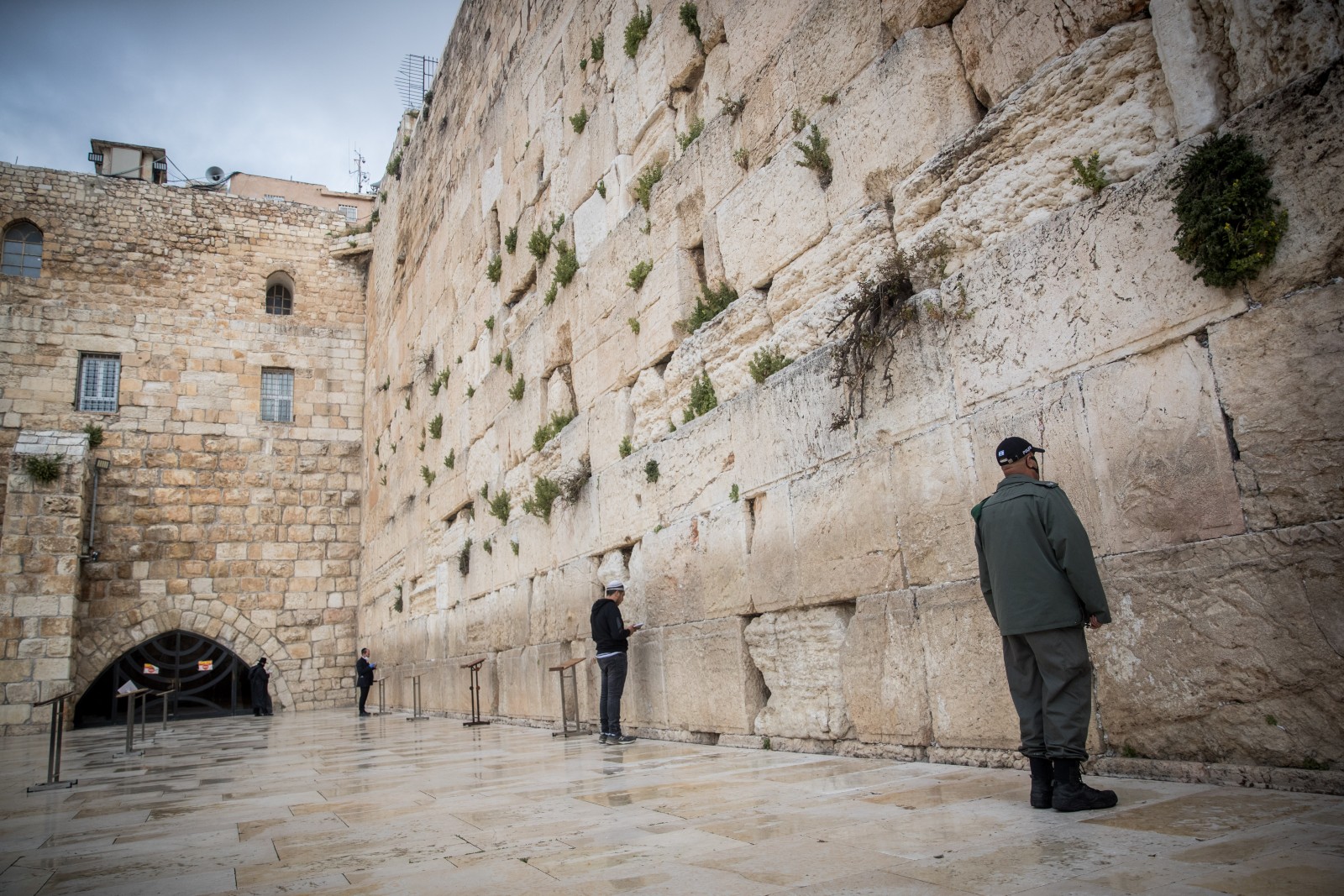 The Western Wall in the Old City of Jerusalem, April 10, 2020. Photo by Yonatan Sindel/FLASH90

The Western Wall (Kotel) is a 70-meter (230-foot) section of one of the huge retaining walls of Herod the Great’s expanded Second Temple compound, built around 20 BCE and destroyed by the Romans around 70 CE. It is revered as a place of worship for its proximity to the Temple Mount.

The tunnels behind the wall are still revealing amazing treasures and mysteries. 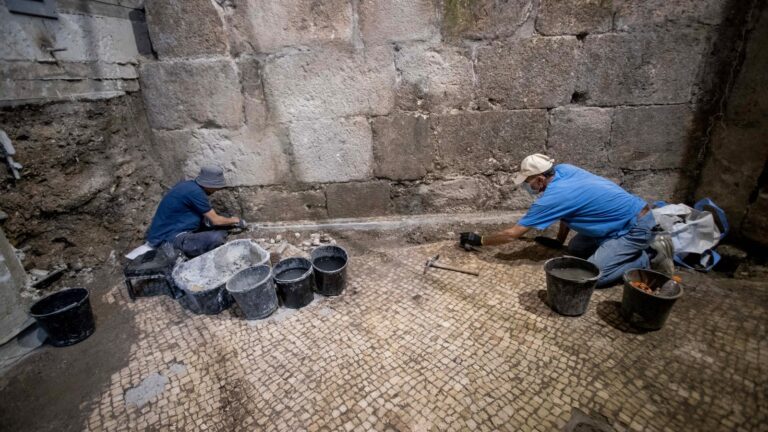 An Israeli Antiquities Authority archeologist inside a Second Temple subterranean system discovered at the Western Wall tunnels, May 19, 2020. Photo by Yonatan Sindel/FLASH90

Davidson Archeological Park and Museum houses many artifacts including city walls from the First Temple period and the original street from the Second Temple period, as well as models and multimedia presentations. 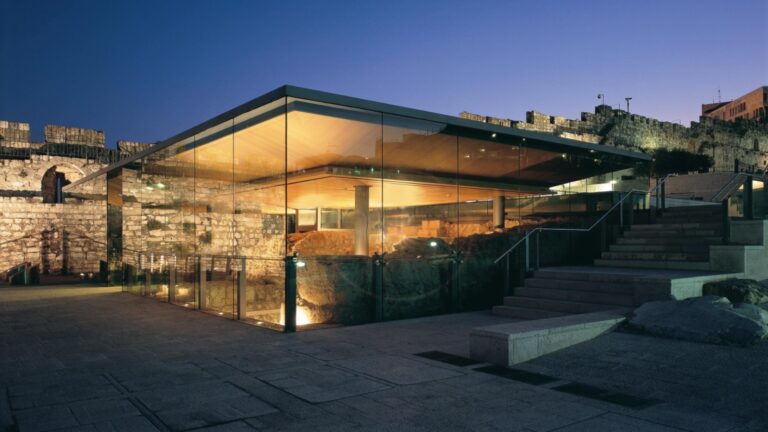 The fourth-century Church of the Holy Sepulchre is built on the traditional site of Jesus’ crucifixion and burial. Since 2016, National Geographic has been documenting the restoration of the church’s Edicule, a small chapel believed to contain the empty tomb of Jesus. 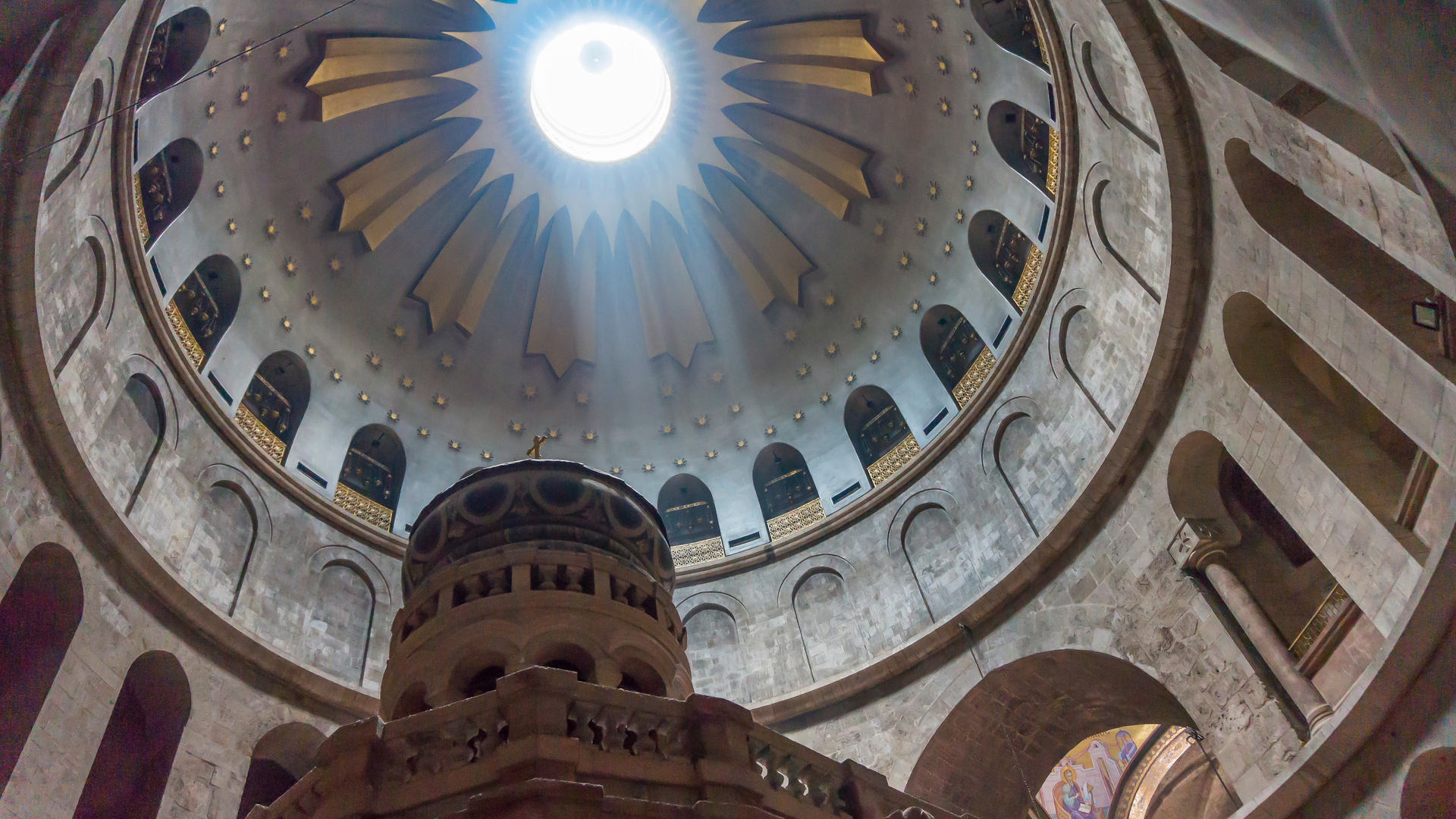 The Edicule at the Church of the Holy Sepulchre in Jerusalem opened to worshipers in 2017. Photo by Shutterstock

City of David, the original “Old City” just outside the present walls. Excavations include a hidden spring where biblical kings were coronated, the flowing waters of Hezekiah’s Tunnel from the eighth century BCE, and a recently unearthed half-mile pilgrimage road leading to the Temple Mount – complete with burned coins and clothing fragments from 2,000 years ago. 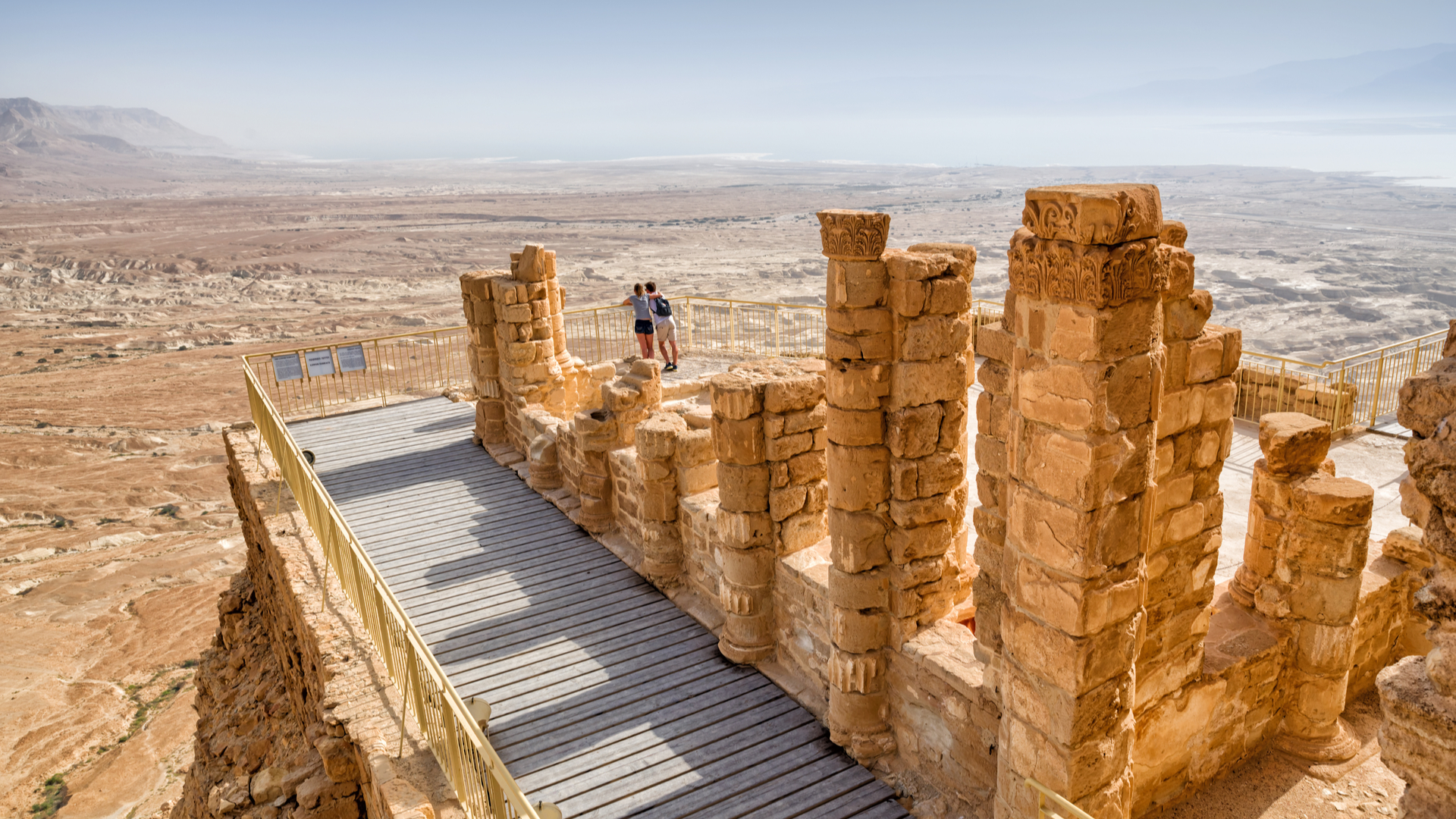 The Second Temple compound was one of many ambitious building projects carried out by Roman client king Herod the Great. Another is the fortress at Masada, overlooking the Dead Sea.

The Northern Palace, built on three rock terraces, included bedrooms with a semicircular balcony, colonnaded halls adorned with paintings, and a private bathhouse.

A public bathhouse was excavated atop the plateau along with 29 huge storerooms, hundreds of clay pots, 12 gigantic cisterns, ritual baths and a stable-turned-synagogue (one of the earliest synagogues in the world).

Hiking paths and a cable car take visitors to the top of Israel’s most popular paid tourist site. At the foot, a nighttime sound and light show tells the legend of a popular revolt against the Romans by a band of Jewish families here.

Archeologists found skeletons and more than 5,000 coins, mostly minted during the five years of the rebellion, along with scroll fragments and more than 700 shards bearing inscriptions.

In the Yigael Yadin Masada Museum, visitors will see hundreds of ballista balls that were fired at the fortress by Roman soldiers. 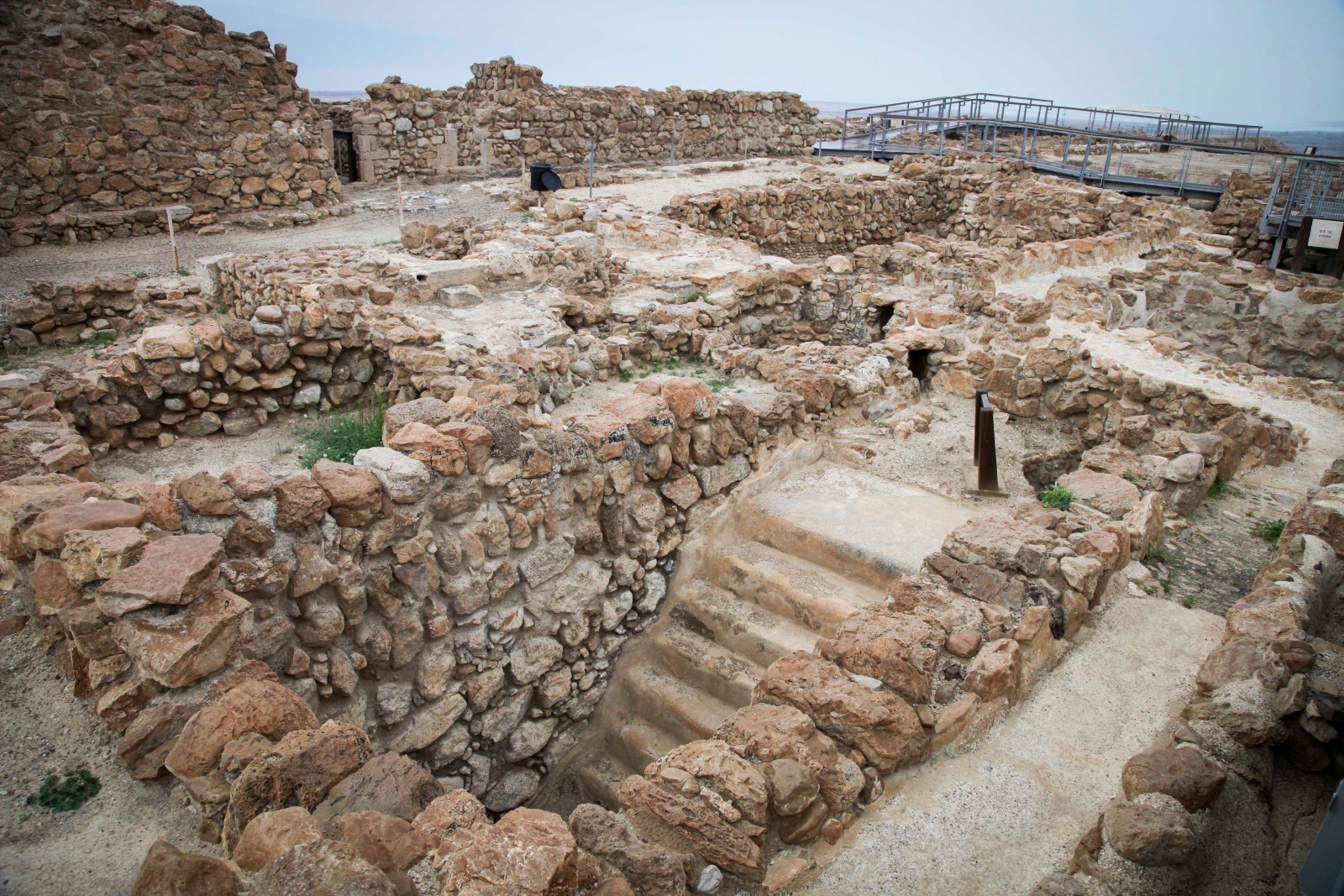 Most of the ancient Dead Sea Scrolls were found in the caves of Qumran, a rocky cliff above the Dead Sea where a Second Temple-era Jewish sect, the Essenes, made their home and left their writings.

You can’t enter the caves, but you can learn about the Essenes in a museum at the site and then explore archaeological finds including ritual purification pools and a communal building with the remains of a kitchen, watchtower, pottery workshops and stables. A two-room scriptorium contains pottery and metal inkwells that may have been used by the Essenes to write their scrolls.

You can sign up for a guided night-time lamplight tour or a dramatized tour reconstructing the discovery and purchase of the scrolls in the 1940s. 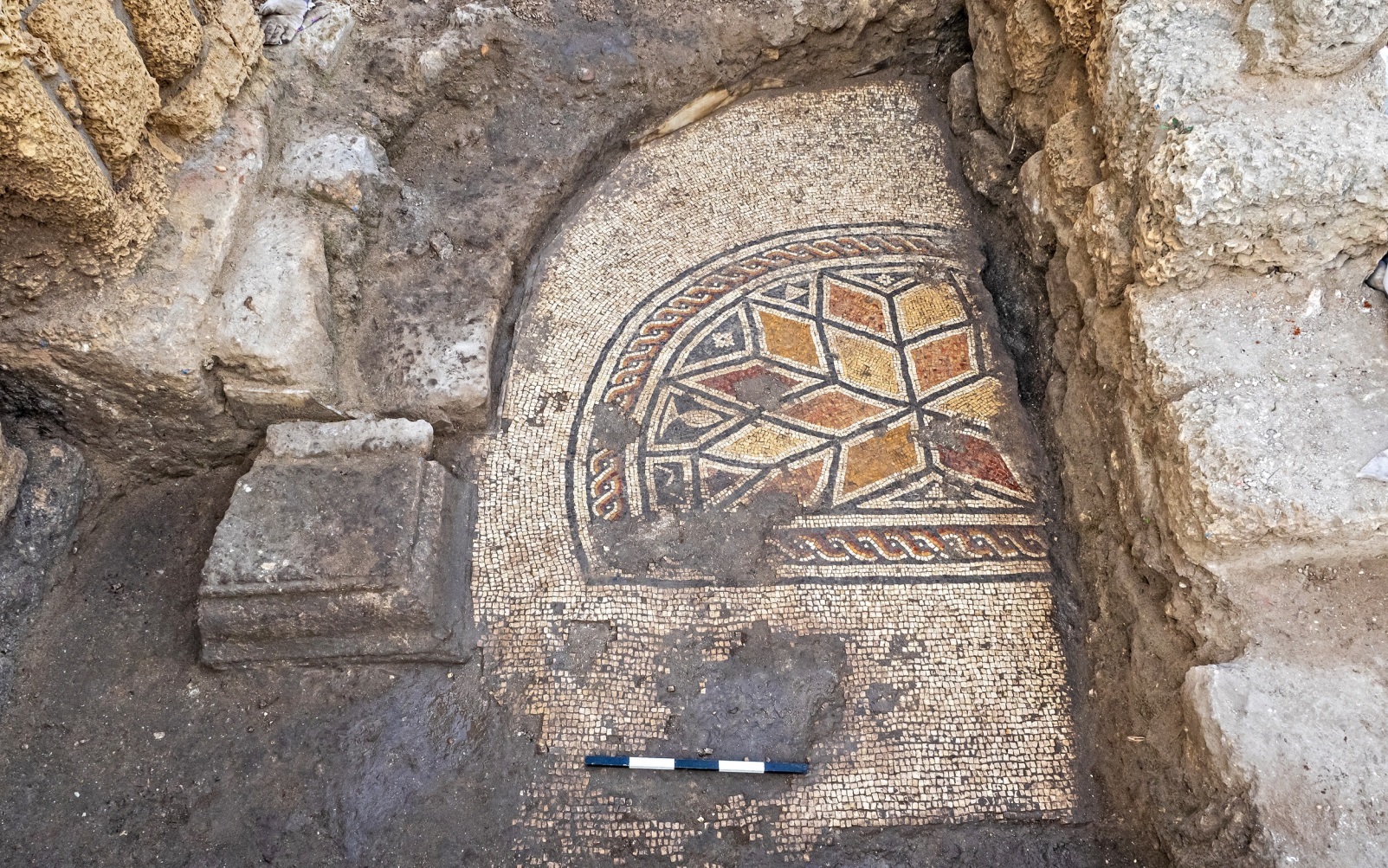 One of the most popular tourist spots in Israel, Caesarea National Park on the northern coast contains many important artifacts with significance for Jews and Christians.

The Herodian harbor area (yes, Herod is at it again) was excavated in the last decade and yielded finds such as a sumptuous Roman palace and amphitheater from the time of Jesus. 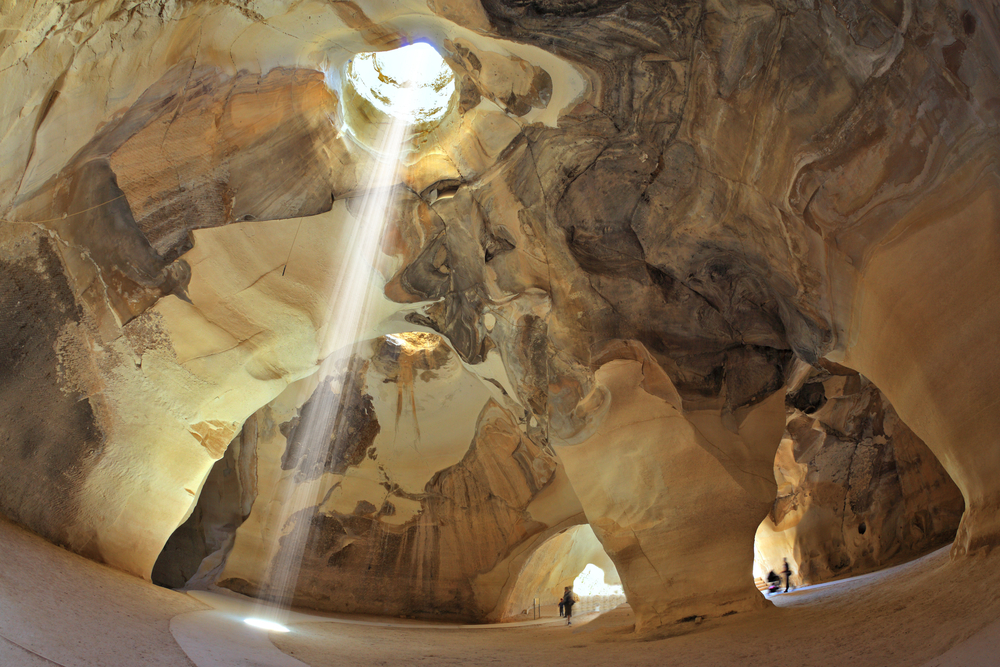 One of the Bell Caves in Beit Guvrin National Park. Photo by Shutterstock

Known as “the land of a thousand caves,” Beit Guvrin-Maresha National Park encompasses approximately 1,250 acres of rolling hills in the Judean lowlands.

Over thousands of years, people cut into the rock to make a network of bell-shaped quarries, burial caves, storerooms, industrial facilities, hideouts and dovecotes.

At a high point in the park is Tel Maresha, where the Bible records that King Rehoboam of Judah built cities for defense. It was abandoned during the Roman period, when the nearby city of Beit Guvrin was built and became an important locale of the Crusader era. 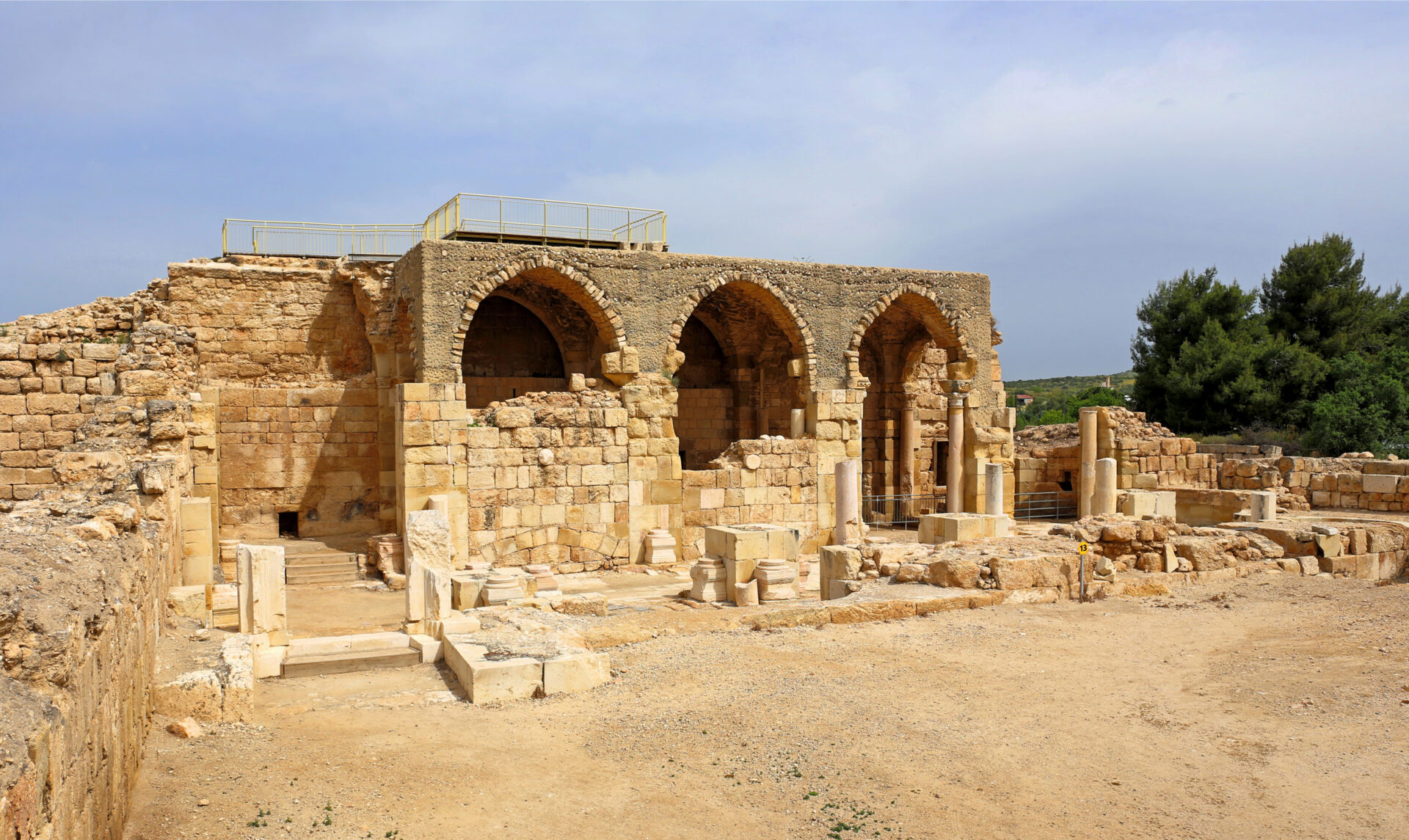 The Crusader Church at Beit Guvrin. Photo by Shutterstock 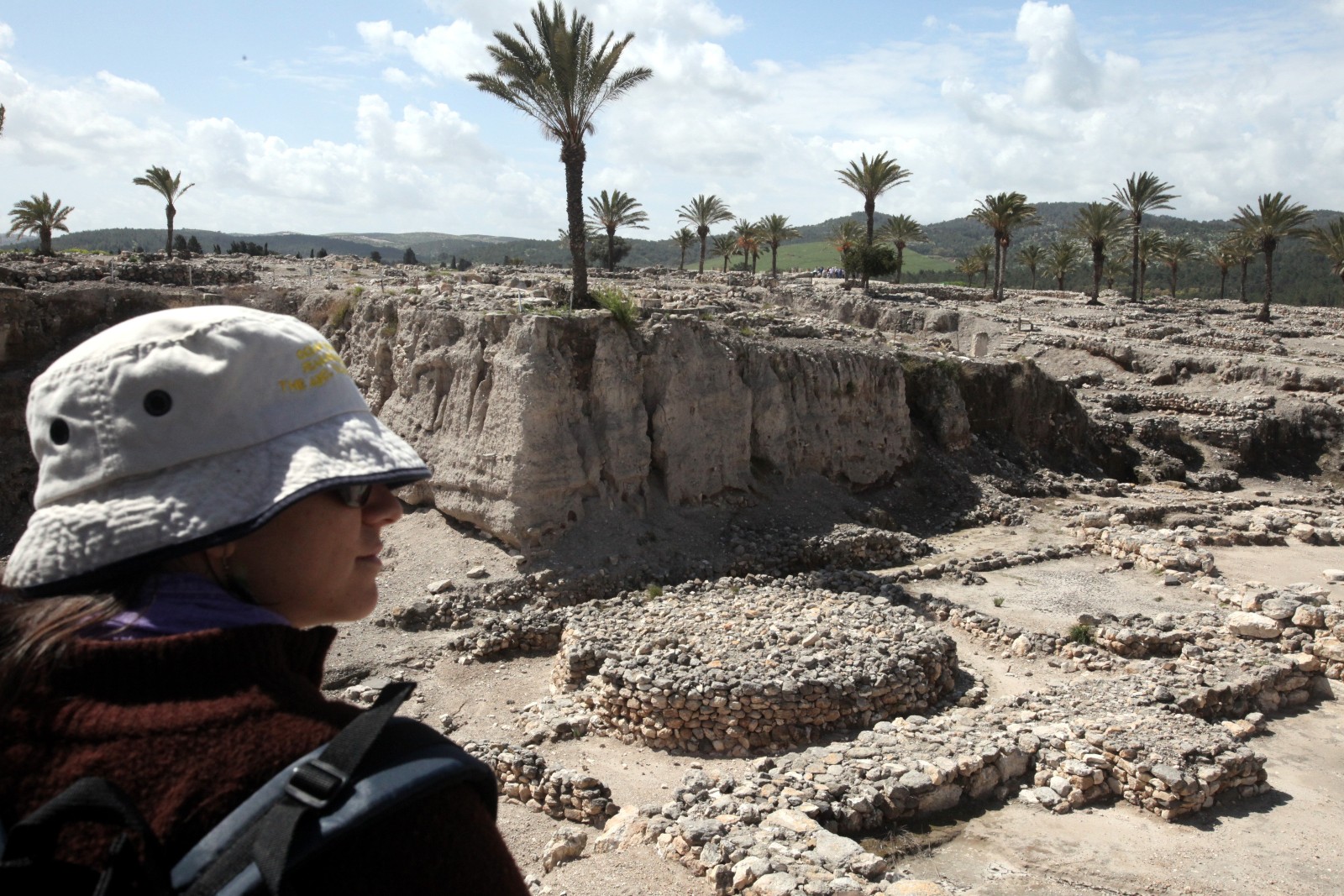 Tel Megiddo, a hill made of 26 layers of ruins of ancient cities. Photo by Yossi Zamir/FLASH90

Located at a critical ancient and modern crossroad in the Lower Galilee, Megiddo has a long, bloody history. Megiddo is identified with Armageddon, the scene of the battle of the End of Days according to Christian Scriptures.

Already a fortified city by the third millennium BCE, 1,000 years later Megiddo became a center of Egyptian rule over Canaan. King David then conquered Megiddo, and the city flourished under his son Solomon, who may have installed its impressive water system.

The Megiddo Museum offers an audiovisual presentation and models of the site’s highlights, such as a Late Bronze Age gate (1500-1200 BCE), a palace, Solomon’s Gate, lookouts and stables.

Recent excavations have unearthed clues to the past including a royal Canaanite tomb from the Middle Bronze Age and surprising remnants of vanilla in jugs from a 3,600-year-old burial site. 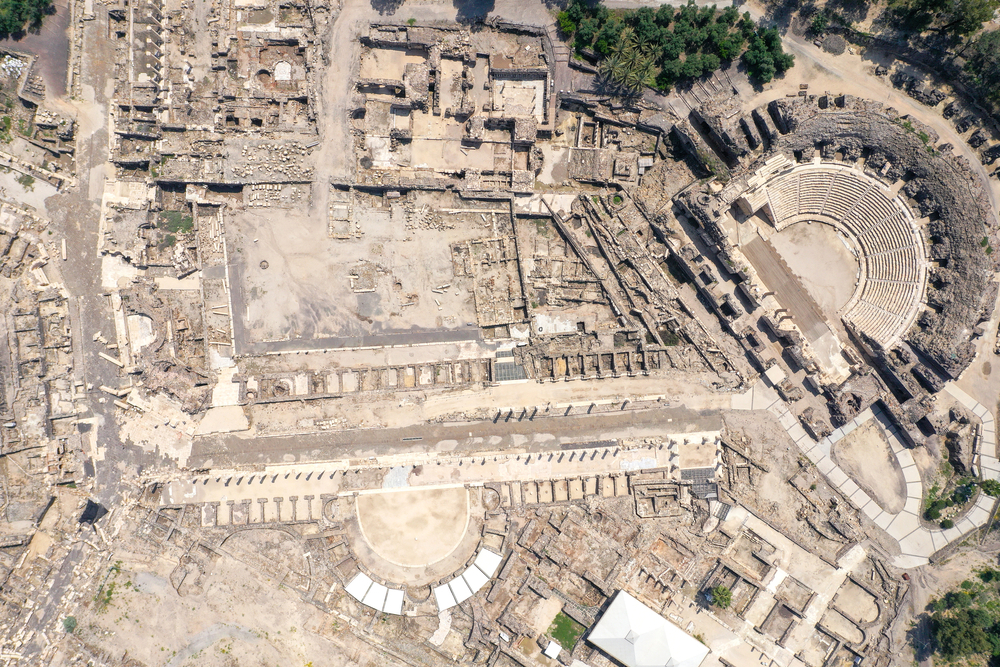 You could easily spend most of the day exploring the 2,000 years of history at Beit She’an with the help of a guide or an audio presentation. After dark, the “She’an Nights” audio-visual show brings alive the ruins with breathtaking projected images. 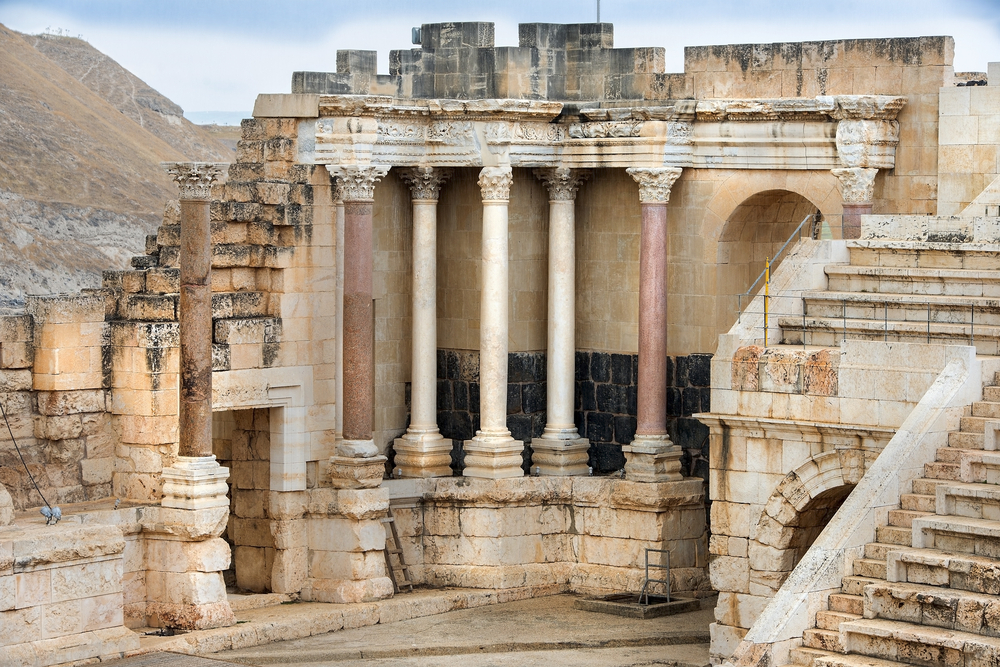 Herodion was a kind of royal country club in the Roman-Hellenist era. It later served as a hideout for rebels during the Bar Kochba Revolt against Roman rule, and even as a Byzantine leper colony.

In 2007, archeologists finally discovered the remains of Herod the Great’s tomb in this Judean Desert site after 35 years of digging up architectural and cultural treasures. There are ongoing excavations at Herodion. 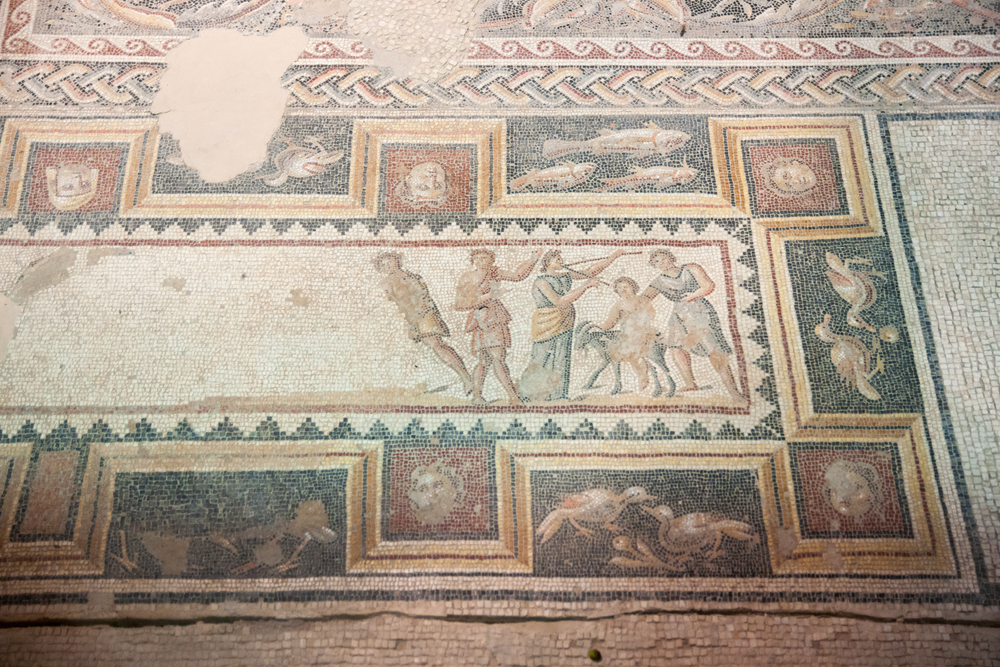 Part of an ancient Roman mosaic in Tzipori. Photo by Shutterstock

Tzipori (Sepphoris), the traditional birthplace of Mary, was an important city in the hills of Lower Galilee, west of Nazareth. Herod conquered it in 37 BCE, but 33 years later it was destroyed by the Romans following rebellions there.

Herod’s son Antipas restored Tzipori as “the ornament of all Galilee.” It was the seat of the Sanhedrin (the Jewish high court) and a preferred residence for Talmudic sages until the mid-fourth century CE.

Archeologists have found evidence of a devastating earthquake around 363, but again the city was rebuilt and settled by an unusual mix of Christians and Jews in the fifth century. Remains of the Crusader church commemorating St. Ann can still be seen, as well as a Crusader fortress, rebuilt in the 18th century by the Bedouin ruler of the Galilee.

Visitors can explore a 4,500-seat Roman theater; a restored third-century villa in which a mosaic depicts scenes from the life of wine god Dionysus and the so-called “Mona Lisa of the Galilee”; a synagogue with a restored mosaic floor; and a 250-meter-long, first-century CE underground water system. 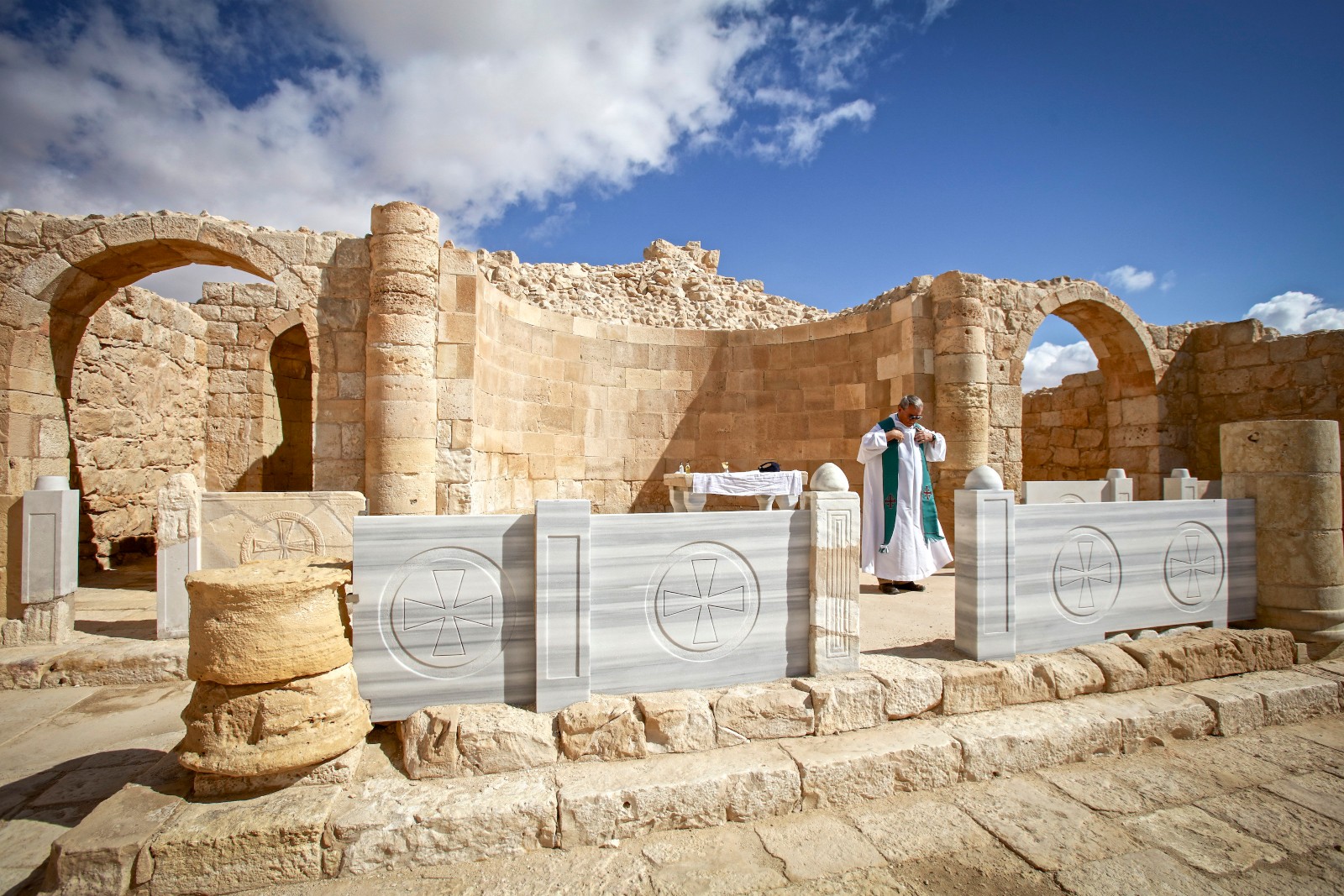 Excavations at the Old City of Avdat, site of a ruined Nabataean city in the Negev desert. Photo by Doron Horowitz/FLASH90

In addition to the astounding views of the Negev at Avdat National Park, you’ll see the well-preserved remains of Roman, Byzantine and Nabatean cities, including two large Byzantine churches, a Byzantine bathhouse, a magnificent Roman burial chamber, and a Nabatean fortress.