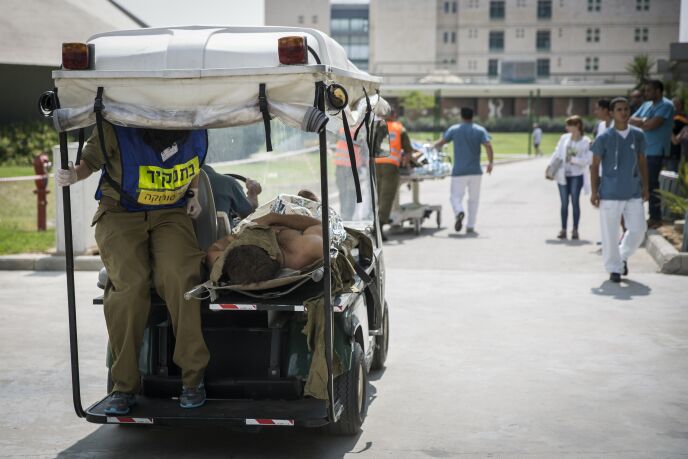 Soldiers wounded in combat in Gaza are led to the emergency room at Soroka. Photo by Hadas Parush/FLASH90

Soldiers wounded in combat in Gaza are led to the emergency room at Soroka. Photo by Hadas Parush/FLASH90

After describing the medical condition of each IDF soldier he has come to know personally, Prof. Jochanan Peiser turns his head to wipe away a tear from under his glasses.

“This one is fighting for his life,” Peiser tells ISRAEL21c, as we stand at the entrance to the room of an officer with a piece of shrapnel lodged in his brain.

A few steps away, in another bed surrounded by machines, he says with a loving, but pained expression: “For this one, the battle is over. The best we can do is to respect his parents’ wishes to keep him alive.”

We are walking through the intensive-care unit of Soroka University Medical Center in Beersheva, and Peiser – the hospital’s deputy director-general — is careful to keep his voice down as he speaks about the young men being treated for wounds they sustained during Operation Protective Edge, otherwise known as the war in Gaza.

Along with the other medical center closest to Israel’s border with Gaza – Barzilai in Ashkelon — Soroka has been on the frontlines of the war, fighting to heal soldiers, civilians, Jews, Arabs, Bedouin – and even a Hamas terrorist brought in with the IDF soldiers he was attempting to kill.

“We make no distinction among our patients once they enter our premises,” Peiser says, as we walk by a grassy field between the buildings of the medical center.

Since the start of the operation (and until the writing of this article), Soroka treated 1,116 people — 740 soldiers and 376 civilians. Of these, 53 were critically injured, 40 moderately, and the rest mildly injured or suffering from shock. During this period, the number of surgeries performed on those wounded in Gaza was 140.

What looks at first glance like a soccer pitch is a landing strip for medevac helicopters. They, like the staff at Soroka, have been working around the clock since July 8, when Protective Edge was launched. Thus far, 60 helicopters transporting the wounded have landed at the hospital’s helipad.

And this is while continuing to treat the regular flow of patients. For example, a whopping 1,400 babies were delivered during Operation Protective Edge at the hospital’s Saban Maternity Center, all of whose wings are built as bomb shelters, with a record 68 in a single day. (Eerily, this was the exact number of deaths that Israel had incurred up until that day.) 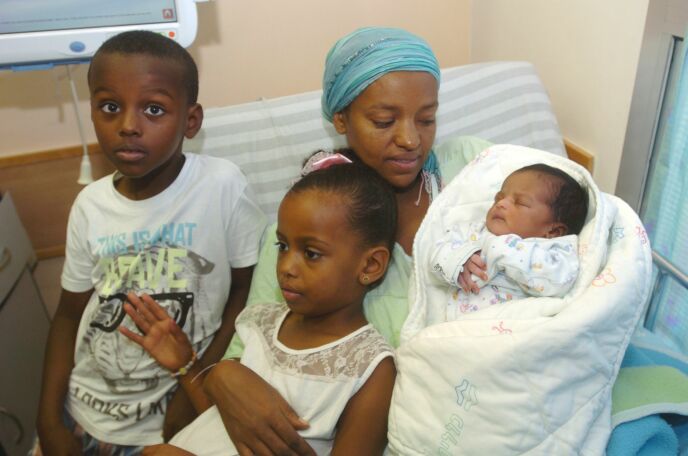 Glato Kshaun gave birth at Soroka on July 31, 10 days after her husband, Sgt. Maj. Bayhesain Kshaun, was killed in action in Gaza. Photo by FLASH90

Still, the facts and figures tell only part of the story of a hospital that is not only the first stop for many emergencies from Gaza, but also under rocket attack from there as well.

As Soroka Medical Center Director Dr. Ehud Davidson recounts to ISRAEL21c, “The war has been going on during the summer, when schools are out and camps are closed because of the rockets. Our incredibly dedicated staff of doctors, nurses, psychologists, social workers and administrators did not agree to take any time off – even when we begged them to go home and get some rest.”

But, Davidson explains, those with young children on vacation, and frightened by the constant air raids, needed a solution. It was for those essential employees that daycare centers were set up in bombproof areas of the hospital.

Then there were staff members those whose own loved ones were taking part in the fighting in Gaza.

“Imagine these medical personnel being on call and treating evacuated soldiers, knowing that any minute, one of their kids could be killed or wounded – and brought here,” says Davidson. “It’s a completely abnormal situation which they have been handling with grace and skill. Hats off to all of them.” 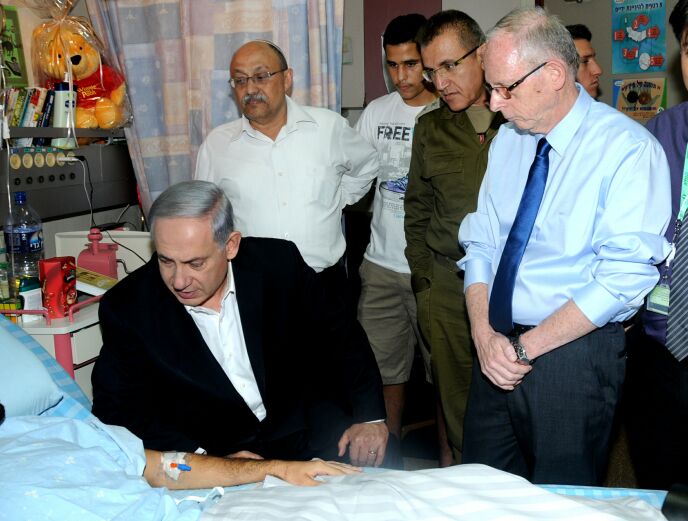 A happier challenge for the Soroka staff has been the incessant flow of family members, well-wishing strangers, fellow soldiers, politicians and celebrities in the hospital at all hours. There to help, pray for and express love and appreciation for the wounded, the hundreds of people traipsing in and out of the different wards – bearing mounds of cake and candy – has practically camped out, picnic-style, in the orthopedic wing.

Davidson says this causes a dilemma. “On the one hand, it is so important for the wounded to be surrounded by friends and family,” he says, which is why Soroka is happy to accommodate the mayhem. “On the other, the patients need peace and quiet; they need to rest.”

He concludes with a quip: “Our biggest worry about these guys, once they get well enough to be discharged, is that they didn’t develop diabetes from all the sweets they’ve been showered with.”