And Design Break has this to say about MeDusa, whose urban-chic products have been featured in Vogue Accessory and won the 2014 Young Vision Award for Accessories from Muuse x Vogue Talents: “Their ever growing collection of bags, jewelry and laptop cases is a sea of color, fun and madness.”

MeDusa partners Gili Rozin Tamam and Adi Gal, both 32-year-old jewelry design graduates of Israel’s Shenkar College of Engineering and Design, say it’s because they created something completely new in the fashion accessory market by using this everyday material in a groundbreaking and innovative way. “It’s a magic material and you can do anything you want with it,” Rozin Tamam tells ISRAEL21c of the sculpted industrial plastic in vibrant hues from which MeDusa accessories are made in Israel.

“The advantage of plastic over fabric is that it can be very flexible and strong so it can provide the structure of the bag on its own,” adds Gal. “People can use the bags daily because they’re sturdy and long-lasting.”

They discovered that many shoppers like alternatives to fabric and leather, especially as plastic is stronger than fabric and doesn’t come from animals that are often slaughtered inhumanely. But mostly, MeDusa’s appeal is that its products are funky and fun.

“As the brand gains more of its own personality, the material is not the main thing,” says Rozin-Tamam. “The MeDusa bag has value of its own, though plastic is still the heart of making our bags and jewelry unique and different.”

To pay tribute to some key cities that have embraced MeDusa, Rozin Tamam and Gal recently launched the first four of its Landmark collection of handbags themed to Tel Aviv, Paris, New York and Moscow. Another four models will be released before next season’s shows. These bags retail between NIS 179 (about $50) and NIS 380 (about $110). 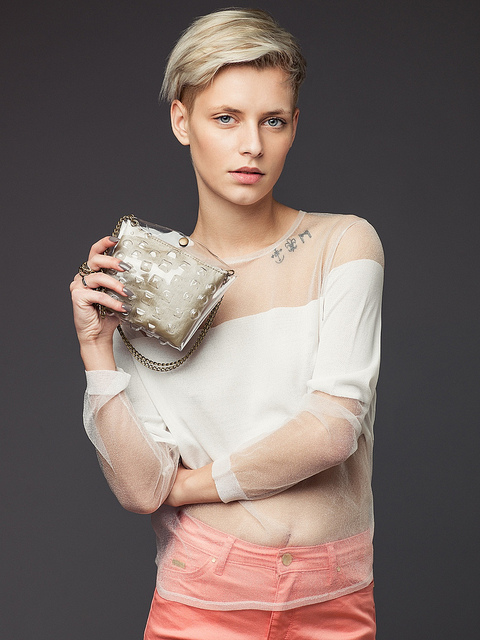 “Our first inspiration came from Tel Aviv, the city where we both live and work,” says Gal. “The architecture and geometric shapes in the city are always reflected in our work — especially in this specific collection.”

Rozin Tamam adds: “Big cities all over the world are inspirations for us in everything we do. We have customers in Paris, New York and Moscow, and we can imagine them buying the bag named for their city and looking amazing.”

The Landmark collection uses a new manufacturing technique. “Up until now we used the plastic as a sheet where we stamp our images and patterns. For this collection, we wanted the shapes of the bags to be a result of the shape of the plastic,” says Gal, emphasizing that MeDusa scales production for large quantities rather than collectors’ items.

“Tel Aviv” is a large envelope clutch with a detachable strap, big enough for an iPad or a small laptop. It’s meant as a unisex accessory due to its color combination and geometrical (black with black, blue, green or red) design. “New York” is a “rebellious” evening clutch (also in black, blue, green or red) whose surface resembles rough animal skin. The combination of toughness with a small, classic and elegant evening purse is the source of this model’s unique appeal.

“Moscow” is a transparent plastic clutch bag with a thin, opaque faux-leather pocket available in gold or silver. Transparent bags are trendy, and MeDusa previously explored this style in a collaboration with Maybelline New York.

“Paris” is a medium-sized bucket bag that teams with daytime outfits or eveningwear. The imprinting technique provides the bag’s unusual texture, giving it the appearance of gems imbedded in plastic to suggest a combination of a tough urbanity and fun. It comes in black-black, black-beige, blue-beige, green-beige and red-beige.

While working in tandem during their senior year at Shenkar, the two designers were finalists in the International Talent Support Competition in Trieste, Italy. In 2009, they began their business in Gal’s house. Two years later they opened their Tel Aviv design studio on Dizengoff Street alongside shops of some of Israel’s hottest young designers. 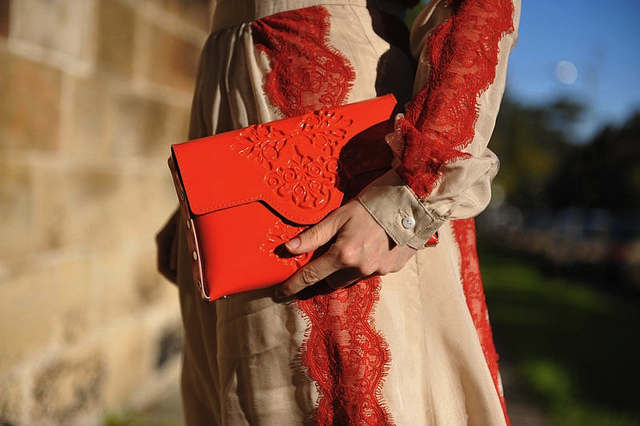 SneakyPeek 360 Fashion featured this MeDusa bag on its blog.

MeDusa means “jellyfish” in Hebrew, and the original pieces were inspired by the natural shapes of flora and fauna in nature, particularly in the ocean.

“I think our items are just made for being international because they have global appeal, speaking an international language,” says Gal.

Indeed, international fashion magazines Grazia (UK), Fabulous (UK) and Vogue (Italy) feature MeDusa bags and jewelry in their pages. MeDusa’s e-store on Etsy has proven popular with shoppers in many countries, and people also find some of the collections on the website boticca.com. MeDusa products are sold in boutiques across the United States (California, Texas, New York and New Jersey, among other states) and Europe (including Russia, Italy, Denmark and the UK).

UNCOVER ISRAEL - Get the ISRAEL21c
Weekly Edition free by email
Sign Up Now!
Bring Israel's story to life.
Millions of people around the world rely on us to gain a deeper understanding of Israel. We are the trusted source for original content you won't find anywhere else.
You can make a difference. Donate today to support journalism that brings Israel’s story alive.
SUPPORT ISRAEL21c
Read more on:   gil rozin tamam, Shenkar College, Lifestyle, Visual Arts, Culture, Fashion