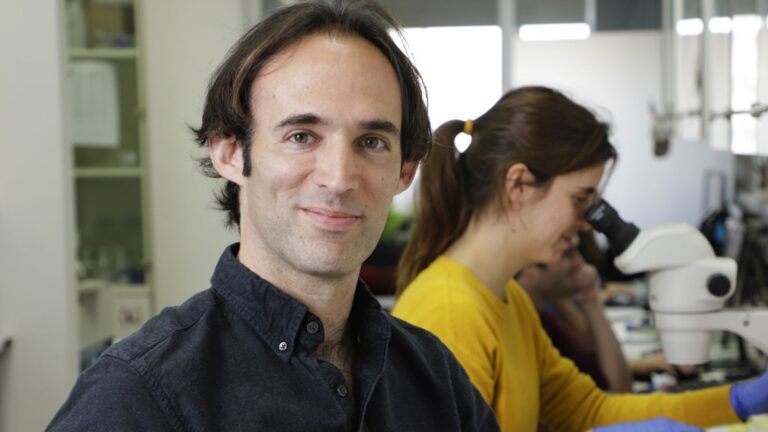 A polymath is a person of wide-ranging knowledge or learning.

Rechavi and Prof. Jeff Gore of MIT each will receive $2.5 million, paid in increments over a period of five years, to pursue any research project they choose.

Schmidt Futures describes the program as “an experiment in extreme curiosity-driven innovation. Instead of focusing on specific research ideas, the goal for the program is to bet on people, their special talents, and their teams.”

Rechavi explains that Schmidt Futures is essentially saying, “Here are the resources. Do something completely new, take risks. Investigate wild ideas you never would have dreamed of proposing to other research foundations.”

Rechavi’s research in recent years has been in multiple disciplines, although all have a central common core: DNA.

In September, ISRAEL21c reported on Rechavi’s research on worms that shows how epigenetics may work in humans. Epigenetics studies how information from the environment can be passed on through our RNA, independent of changes to the DNA.

In a completely different direction, Rechavi and his team assisted in decoding the Dead Sea Scrolls through analyzing the DNA of the parchments on which they were written.

He has also explored the neuronal basis of irrationality, again using worms, and he and his group genetically engineered parasites to turn them into protein-secreting machines enabling repair of genetic diseases of the nervous system.

These days, Rechavi’s lab focuses exclusively on the C.elegans nematode, a type of worm with a super-short generation time of just three days, and a nervous system composed of a mere 302 neurons, making it easier to map and study.

Schmidt Futures co-founder Eric Schmidt was the CEO of Google from 2001 to 2011 and the executive chairman of Alphabet, Google’s parent company, from 2015 to 2017.