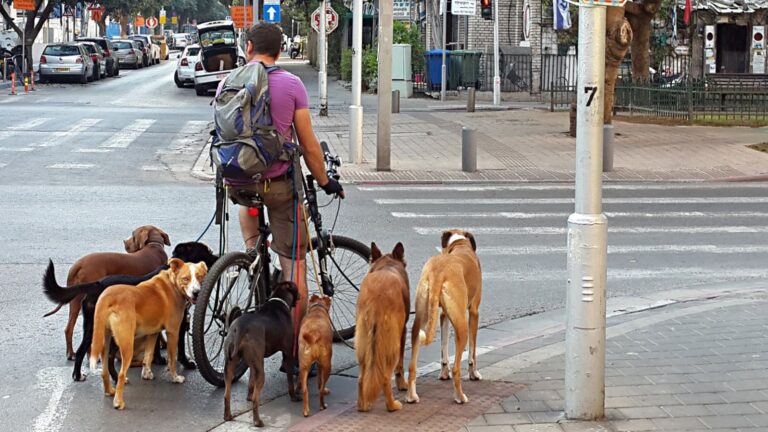 A dog walker doing his duty on Rothschild Boulevard in Tel Aviv. Photo by Dror Garti/FLASH90

Tel Aviv was ranked third in “Best Cities For Dogs,” a global research study conducted by German insurance company Coya to find the 50 most dog-friendly cities around the world.

The study was released today (August 26) in honor of International Dog Day.

Coya took note of numbers of pet pooches, infrastructure such as pet-supply stores, dog parks and dog-friendly restaurants and other establishments, the cost of dog ownership, abandonment rates, and even the city’s fines for failing to cleaning up pet waste.

The two cities that came in first were San Francisco and Seattle. Seattle has the most dogs per capita, with 246.67 pooches per 1,000 inhabitants. Tel Aviv has 182.10 dogs per 1,000 people, putting it in third place in that category behind Seattle and Miami.

Though it came in third overall, Tel Aviv came in first for number of pet stores. And in comparison to San Francisco and Seattle, Tel Aviv has more dog parks and veterinarians per dog.

However, the lifetime cost of dog ownership in Tel Aviv is more than in either of those cities, at an estimated $22,723.37. That puts Tel Aviv in ninth place on the list in terms of expense (Zurich is the highest, at $34,456.63).

Some other findings: Basel, Switzerland has the lowest dog abandonment rate, while New York has the highest. Madrid charges the steepest fine for not picking up dog waste. And Helsinki boasts the highest number of dog-friendly hotels.