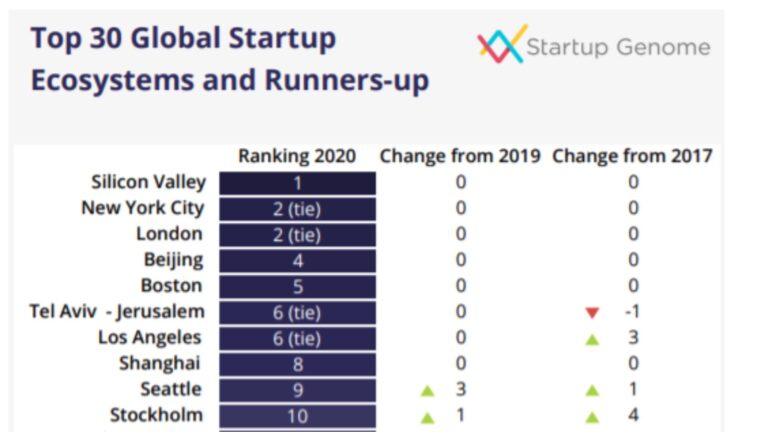 Tel Aviv and Jerusalem together came in sixth place in a ranking of the most attractive ecosystems for startups and innovation.

The survey from technology research firm Startup Genome, which has been ranking startup ecosystems since 2012. The firm looked at 150 cities worldwide. Tel Aviv and Jerusalem tied with Los Angeles, which also took sixth place on the list.

In first place, not surprisingly, was Silicon Valley. New York, London, Beijing and Boston came next.

Silicon Valley received a score of 10 in all success factors other than connectedness. Tel Aviv and Jerusalem received scores of nine in performance and funding, 10 in market reach, eight in connectedness, nine in talent, but only four in knowledge.

Tel Aviv is usually cited as Israel’s high-tech mecca. But Startup Genome pointed out that Jerusalem has become increasingly strong in biotech and life sciences, with some 150 companies receiving municipal support.

In Startup Genome’s 2019 report, Tel Aviv was ranked with Los Angeles in place 6-7 overall. Jerusalem ranked in the top 20 in AI and in the top 10 in life sciences, but only in the top 50 overall.

Hadassah Medical Center and the Hebrew University of Jerusalem are driving the biotech surge in Israel’s capital, the survey said. (The Jerusalem Development Authority is a paying member of Startup Genome’s network.)

Jerusalem also has some 80 AI-related companies, including Mobileye and Lightricks, according to the report. The city’s tech scene has been developing at “an unprecedented pace” with a total of around 500 tech companies today.

Tel Aviv is also strong in AI – 41% of startups in the city are in this sector. Big data and cloud technologies come in second, with a 38% share. In addition, cybersecurity companies in Tel Aviv export $6.5 billion in products a year and accounted for $3.4 billion in exits, either via IPO, merger or acquisition, in 2019. There are some 100 multinationals in Tel Aviv, including Amazon, Yandex and Alibaba.

Startup Genome’s report also considers the impact of Covid-19, a potential “mass extinction event for startups.” The research showed that only 28% of startups have seen their funding proceed as normal and over 74% have had to terminate full-time staff.

The report mentions an Israel governmental program that calls for $180 million in grants to support the country’s high-tech startups. These grants will be deployed through the Israel Innovation Authority. The city of Jerusalem has also established a support center for businesses in the city, including special assistance with IIA grants.