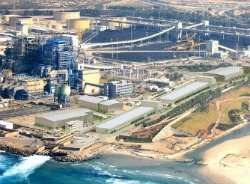 Researchers from the Technion-Israel Institute of Technology’s Stephen and Nancy Grand Water Research Institute in Haifa were part of a team that won a $125,000 honorable-mention grant in the United States Agency for International Development (USAID) Desal Prize competition.

The Desal Prize aims to incentivize the creation of an environmentally sustainable small-scale brackish water desalination system that can provide potable water for people and crops in developing countries.

The prize money will be used toward building the team’s wind- and solar-energy-powered Green Desal system to treat groundwater in Jordan.

The Israelis joined the competition at the request of researchers from the University of North Texas, who focused on the alternative energy aspect of the competition. They asked Prof. Carlos Dosoretz and Prof. Ori Lahav to address the desalination aspect. Researchers from the Asian Institute of Technology & Management (Nepal), National Center for Agricultural Research and Extension (Jordan), and State University of Ponta Grossa (Brazil) also participated.

“Hundreds of proposals from around the world were submitted in this competition,” said Lahav, head of the Water Research Institute.

In April, six groups advanced to the final round, held at the Bureau of Reclamation’s Brackish Groundwater National Desalination Research Facility in New Mexico. Each team had two days to set up a complete pilot system and operate it autonomously for 48 hours to demonstrate its effectiveness in the field.

“The water-treatment process was based on an innovative combination of three technologies – reverse osmosis, ion exchange and nano-filtration,” explained Lahav. “The challenge was to find a solution for problematic water characterized by particularly high concentrations of dissolved calcium and sulfate.”

The Technion team also included engineer Ran Nahir and Liat Birnhack, of the faculty of civil and environmental engineering.