The alarm clock hasn’t even rung. Most people would say it is still night but for my husband, Jonny Kuritsky, it is morning.

He’s long out of bed as the muezzin’s voice floats toward us over the loudspeakers from the mosque in the village of Mazra’a across the road.

In the dark hours of pre-dawn, the jackals cry. Then, at exactly 5am, Kuritsky (that’s what I call him) climbs onto his rugged electric club car, headed for his job in the avocado groves of Shavei Zion, the village where we live in the Western Galilee.

He mostly works on a tractor, a dream job for a guy who, as a child, played with tractors and trucks in the dirt. He sprays against diseases that harm the avocado trees in the 1,000-dunam (about 250 acres) grove.

Most people his age – he just turned 70 – might prefer to retire. That’s not his game plan.

“Why should I stop? If I can get on a tractor and spray and do a good job with a little experience under my belt, why should I stop because of a number?”

Kuritsky works with a diverse team of men that includes four Israeli Arabs, four Israeli Jews, and four workers from Thailand who are in Israel for five-year stints. The dozen men speak to one another in a mixture of Hebrew, Arabic, Thai and English. 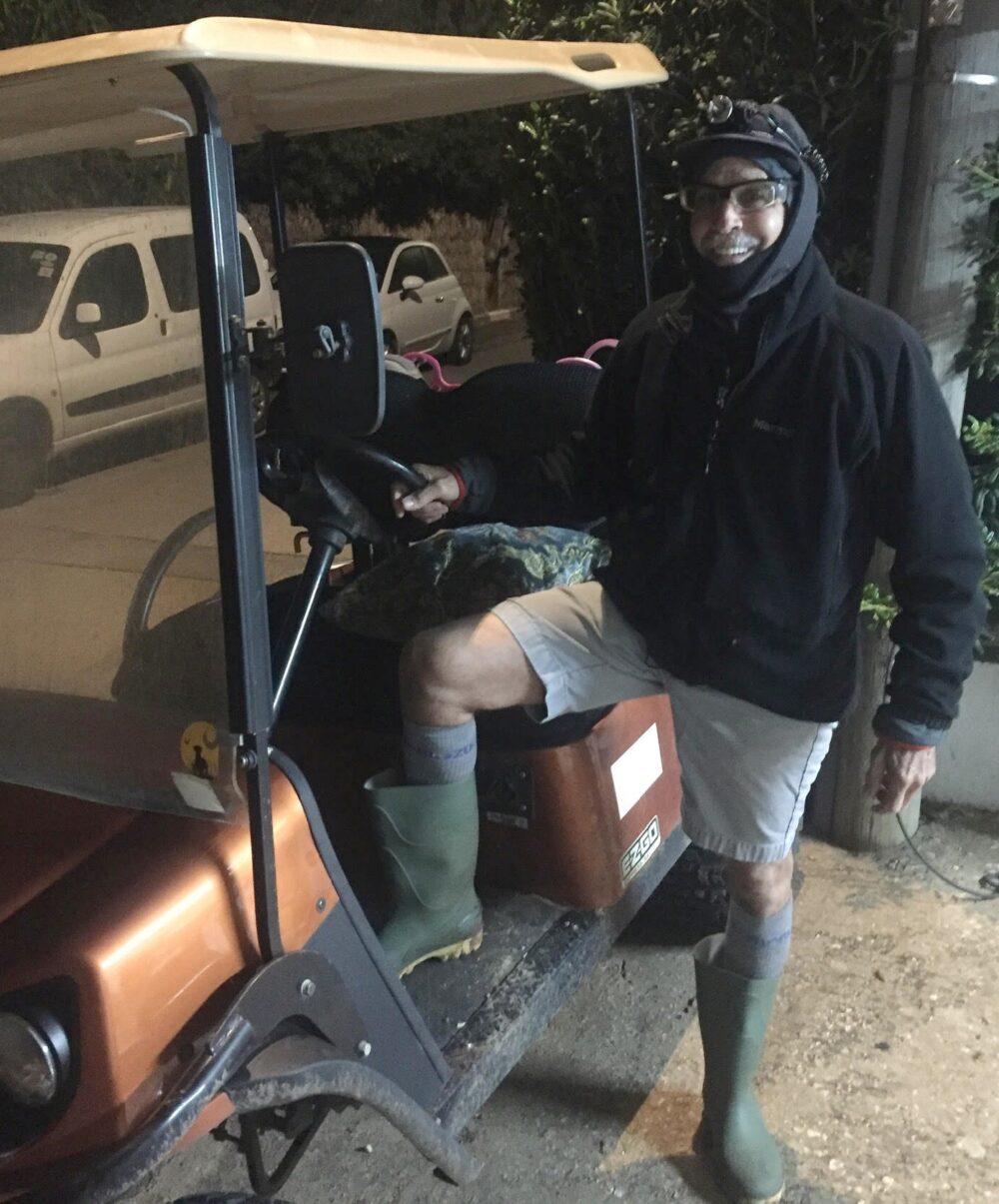 Jonny Kuritsky wears shorts to work all year round. Photo by Diana Bletter

I decided to do a “take your wife to work day” to watch my husband in action. I am in awe of his energy, his work ethic, and his care for the other workers.

On the day I went with Kuritsky to work, in fact, he was worried that one of his fellow workers, Monib (“just Monib,” he said, when I asked him) didn’t bring breakfast. So my husband prepared Turkish coffee with cardamom for him, while Ali Majdoub, another worker, made him an avocado sandwich in homemade whole-grain pita.

The mother of another worker, 27-year-old Aiman Khalaf Alla, “wakes up at who- knows-what hour to make coffee for everyone but she’s sick and in the hospital,” Kuritsky explained.

At a nearby picnic table, the four Thai workers were eating traditional homemade food that they had packed in woven baskets. Except for a hiatus for several years, Kuritsky has worked in agriculture since he moved to Shavei Zion from the United States in 1975.

At the time, there were field crops including corn, onions and potatoes. The field crops have given way to avocados, known as “green gold” because of their international appeal. Shavei Zion grows 10 varieties of avocados.

“What was it like working in the fields back then?” I asked as we rode past a little white birdhouse on a pole, home to barn owls which are part of Israel’s National Barn Owl Project. “I was 23,” Kuritsky began. “I was in good shape. I didn’t have to wear a shirt – nobody knew about skin cancer – and I didn’t need a lot to survive. The field’s irrigation system wasn’t computerized so we did everything by hand. I loved turning on the water and running through the sprinklers.”

Today, 90 percent of the avocado groves are irrigated by treated wastewater through a computerized drip irrigation system.

“Israel is number one in the world when it comes to using treated wastewater for agriculture,” said Nimrod Wolf, the grove manager, as we drove around in his pickup truck that morning. The sun was shining after the previous night’s heavy rain. During the drought in the 1990s, Israeli farmers turned to wastewater treatment out of desperation.

When it was time for a breakfast break, I walked toward the work shed with Majdoub. At “62 and five months,” he said, he has worked in the avocado groves for most of his adult life.

“When I was younger, I performed as a singer at weddings,” Majdoub said. “But when I became religious, I had to choose – either this or that.” Each morning, he prays at home in Sheik Danoun, a nearby village, before driving to work.

“Morning prayers are the most important thing in the world,” he said.

When Majdoub arrives, the groves are still dark because there is no electricity. The only light comes from Kuritsky’s headlamp. He’s in the work shed, boiling water for tea on a small gas stove. Wolf said they are waiting to install solar panels to supply energy.

“We are trying to make the avocado groves as sustainable as possible,” he said.

Until the panels arrive, however, Dov Ben-Ami, 46, who manages irrigation and fertilization in the groves, said, “It’s very challenging. We have the mud, wind, heat and cold and no electricity.”

Ben-Ami grew up on a family farm in the Jordan Valley where they grew vegetables and flowers. In the early 2000s, his family switched to growing Medjoul dates. His two brothers still manage their farm.

On the day that I visited the groves, the workers were picking Gem avocados for export to England and France. About 80% of Shavei Zion avocados are exported. It takes up to two weeks for the fruit to reach Europe. This crate of avocados is headed for European markets. Photo by Diana Bletter

Doing what he loves

Kuritsky works from five until 10 in the morning, five days a week. He said he loves taking care “of a sapling from when it’s first planted and then getting to eat its fruit for years to come.”

Sometimes when there is too much wind during the day, he sprays at night. He remembers one night working a long, dark shift on an open tractor.

“I looked to the east and all of a sudden I saw the tip of the sun coming up over the hills,” he said. “I remember standing up on my tractor and saying, ‘Yes!’”

In the winter, Kuritsky wears “at least seven layers on top” but he always wears shorts. Then he comes home full of mud; in the summer, he’s full of sweat. He sometimes grumbles but he has no intention of retiring. Jonny Kuritsky supervising the hitching of crates to the tractor. Photo by Diana Bletter

“It’s like taking someone’s life away from them,” he said. “It’s like cutting out the biggest part of them. I love to work. And I still have time to drive you and everyone else crazy.”

Perhaps it is because he lost his parents at a young age, he said. His mother died when he was 16 and his father died three years later.

“Maybe when you’re forced to work to put food on the table you get used to it,” he said. “I love to work with younger people, it makes me feel good. I’m part of a group. We have a lot of laughs.”

He said he’s grown close to the other workers; they share family celebrations and birthdays. He said they’re all looking forward to Khalaf Alla’s wedding in July.

“I feel like I’ve been blessed with good health so far, great coworkers, a great boss and the thing I like most in life, being outdoors,” Kuritsky said. “I get to do all this and I even get a salary!”

UNCOVER ISRAEL - Get the ISRAEL21c
Weekly Edition free by email
Sign Up Now!
Bring Israel's story to life.
Millions of people around the world rely on us to gain a deeper understanding of Israel. We are the trusted source for original content you won't find anywhere else.
You can make a difference. Donate today to support journalism that brings Israel’s story alive.
SUPPORT ISRAEL21c
Read more on:   Tales from the heart, Environment, avocados