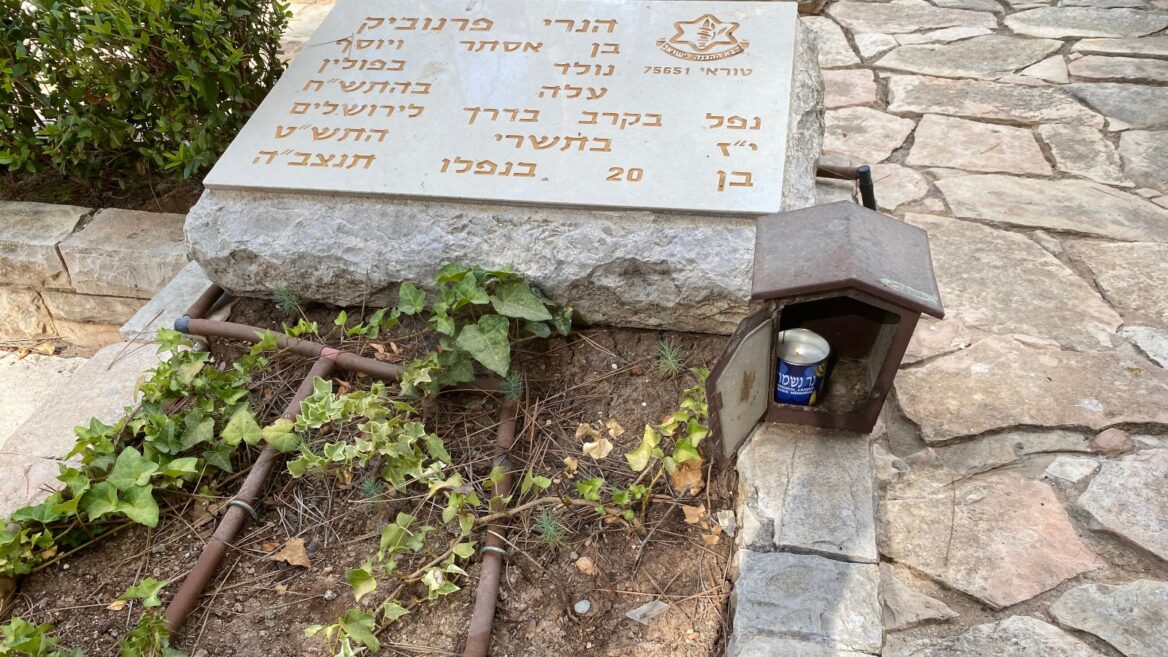 The grave of Henri Fernebock on Mount Herzl. Photo by Abigail Leichman

A letter from my mother was found in Henri Fernebock’s pocket after he fell in Israel’s 1948 War of Independence.

My mother, then a teenager in Yonkers, New York, was astonished to receive notification from the fledgling Jewish state informing her of Henri’s death. It was assumed that she was family. But she was not.

Henri, a 20-year-old Holocaust survivor, arrived in Palestine with no known living relatives. He lay in obscurity in the national military cemetery on Mount Herzl in Jerusalem until December 2020.

That’s when my mother found the 75-year-old clue that led us to his grave.

This year, on Henri’s yahrzeit – his date of death on the Jewish calendar, 17 Tishrei – my husband and I placed a memorial candle and two pebbles on his tombstone, the traditional Jewish way of showing someone has visited. Abigail Leichman placing a pebble on the tombstone of Henri Fernebock. Photo by Steve Leichman

My mother started corresponding with Henri in 1946. Here is how she explains it in her recent memoir, One Day at a Time: How I Got to be a Great-Grandmother.

“Outside of school, some friends and I had a club that met at the Jewish Community Center. We called it WLB, which really stood for We Love Boys. If anyone (read ‘boys’) guessed the meaning, we immediately denied it and if pressed, insisted that it was the War Love Board.

“In addition to weekly meetings we ran various parties, played football, and hosted guest speakers. A special project in 1946 was becoming pen pals with teenagers from Europe. We got a list of names from the World Jewish Congress Child Care Division and we each chose one or two boys or girls for correspondence. We were told to enclose ‘international reply coupons’ at a cost of nine cents each, so our friends could buy air mail stamps.

“I wrote several letters over the next year or so, to an eighteen-year-old French boy named Henri Fernebock. I do not remember what we told each other, but I do know that in 1948 I got a letter from Israel, telling me that Henri had been in the Israeli Army and was killed in the fighting that year. A letter from me had been found in his possession and they wanted to know if I was a relative. Regretfully, that was the last I heard about Henri.”

My mother didn’t tell me this story until about five years ago. She no longer had the letters or recalled Henri’s last name.

“I wish I had known how important these letters might become. I would have kept them,” she tells me now.

And then, in December, she came across a box of old papers. Inside she found the list from the WJC. Now we had a full name: Henri Fernebock.

Within minutes of receiving this information, I emailed the public affairs department of the Israel Ministry of Defense, asking for more information.

A helpful woman named Dina Poliak sent me a link to Henri’s page on the ministry’s memorial website. His surname was recorded in Hebrew as Fernobik, not Fernebock. We may never know which spelling is correct; an inquiry to the WJC got no response. The yahrzeit display in the Mount Herzl Hall of Remembrance for Henri Fernebock, left, has no picture of his face. Photo by Abigail Leichman

Here’s everything we know about Henri: He was born to Esther and Yosef (the same names, by the way, as one set of my great-grandparents) in Poland in 1928. I can only wonder what they named their son (certainly not “Henri”) or how old he was when they fled to France.

Arriving in Palestine in April 1948, Henri volunteered to fight in the War of Independence. Serving in the Beit Horon Battalion of the Etzioni Brigade, he died just six months later on the road to Jerusalem on October 20, 1948.

He and the other 21 soldiers killed in that battle were buried temporarily in Sheikh Badr, the present-day Jerusalem neighborhood of Givat Ram. In August 1950, their remains were moved to Mount Herzl. 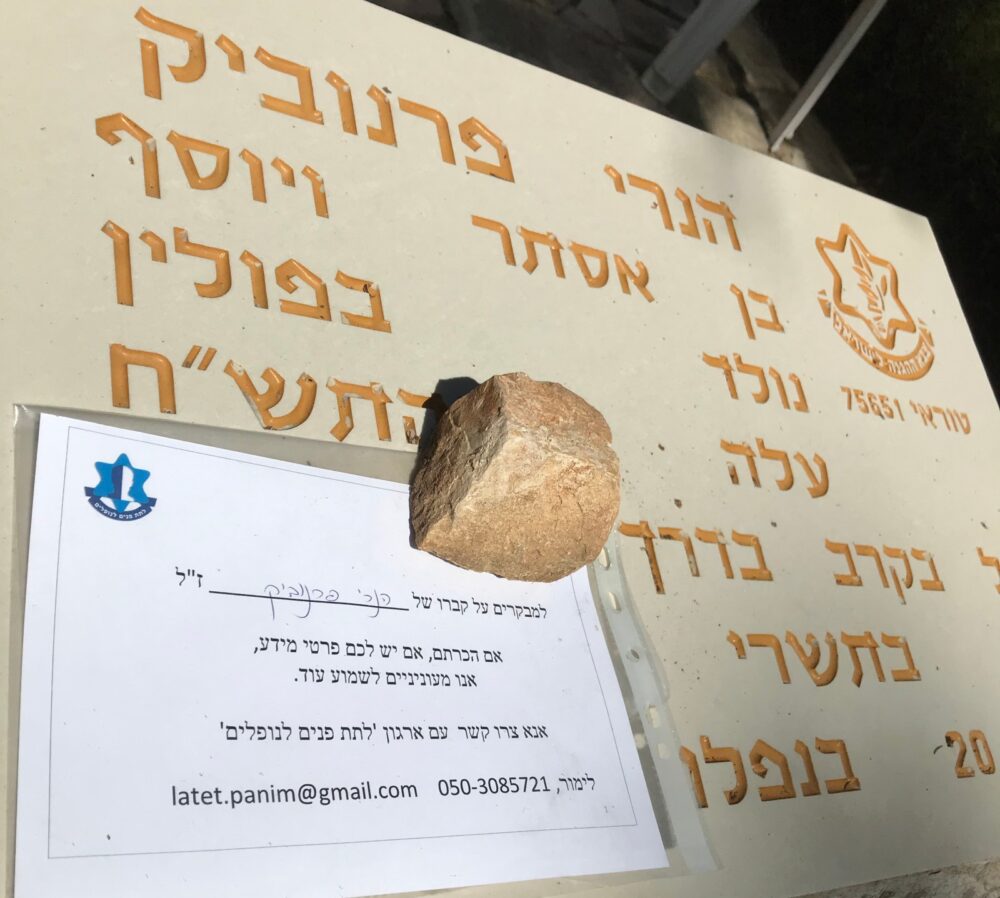 When my husband and I visited his grave on Independence Day last April, there was a note on his tombstone from an organization called Latet Panim L’Noflim (To Give a Face to the Fallen) asking for anyone with further information about Henri to contact them. Unfortunately, we had nothing to add. 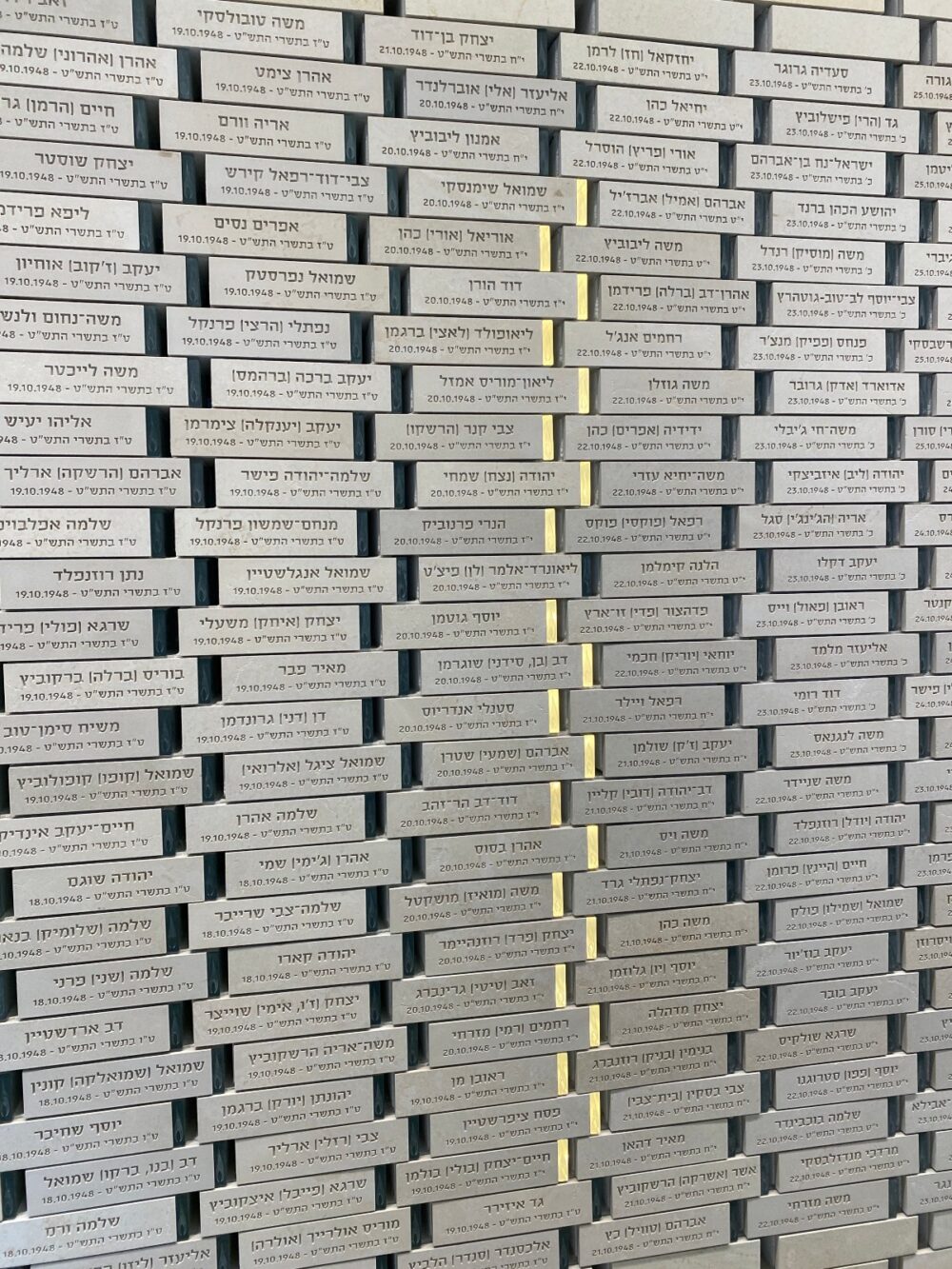 Memorial lights on the bricks in the Mount Herzl Hall of Remembrance for 22 soldiers killed on October 10, 1948. Photo by Abigail Leichman

When we returned on September 23, the date corresponding to 17 Tishrei this year, Henri’s brick in the cemetery’s Hall of Remembrance was lit along with others from his battalion.

Anytime you visit the Hall of Remembrance, you will see a video display of the faces and details of the soldiers killed on that Jewish date in history. The stanchion showing Henri’s details had no picture.

We discovered his full name and resting place only after three quarters of a century.

Perhaps someone can provide more facts, even a picture, to help us – and the country he died defending — understand exactly who this hero was.

UNCOVER ISRAEL - Get the ISRAEL21c
Weekly Edition free by email
Sign Up Now!
Bring Israel's story to life.
Millions of people around the world rely on us to gain a deeper understanding of Israel. We are the trusted source for original content you won't find anywhere else.
You can make a difference. Donate today to support journalism that brings Israel’s story alive.
SUPPORT ISRAEL21c
Read more on:   Tales from the heart, War of Independence