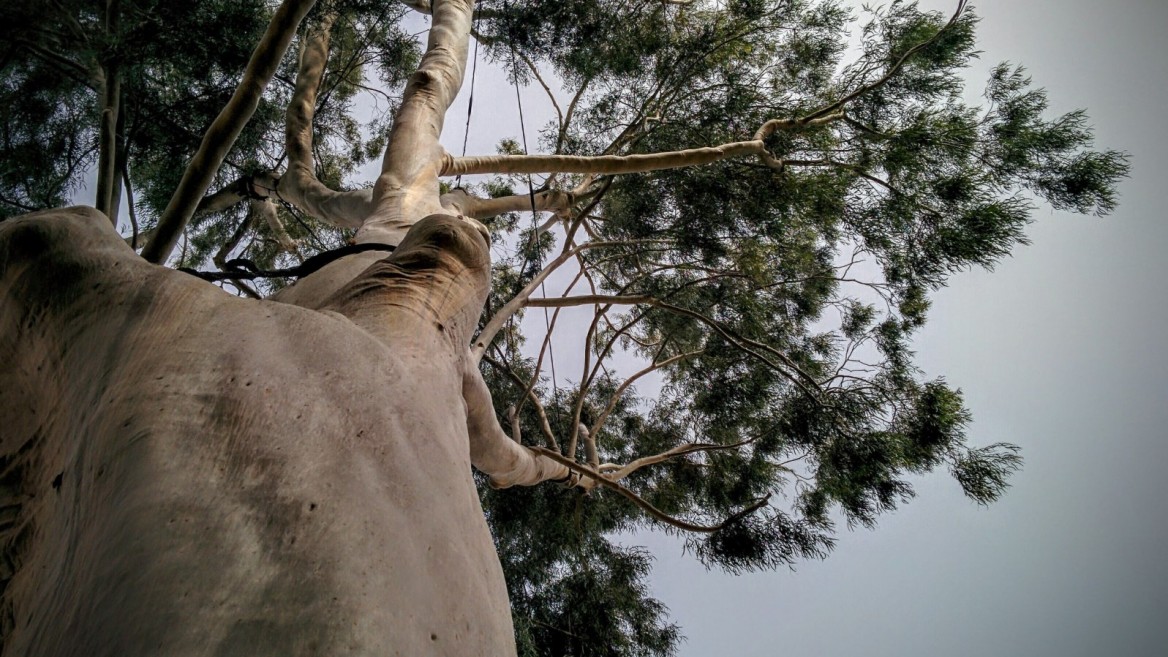 With Tu B’Shvat — the New Year for trees — upon us on January 25, the country’s trees are enjoying the limelight. Israel holds the distinction of being one of the few countries to enter the 21st century with a net gain in trees.

Many Israeli trees date back hundreds of years. If the trees could talk, they’d probably tell us stories about why they were planted, what historical events they’ve witnessed and how many times they’ve been drawn or photographed.

You don’t need to traipse into forests or fields to enjoy these majestic wonders of nature, however. Yaacov Shkolnik — a tree surveyor and author of the book 101 Amazing Trees in Israel – says that while urban trees are often overlooked, they are easily reached and have important tales to tell.

ISRAEL21c presents a do-it-yourself city tour of the most majestic trees in the Tel Aviv area. 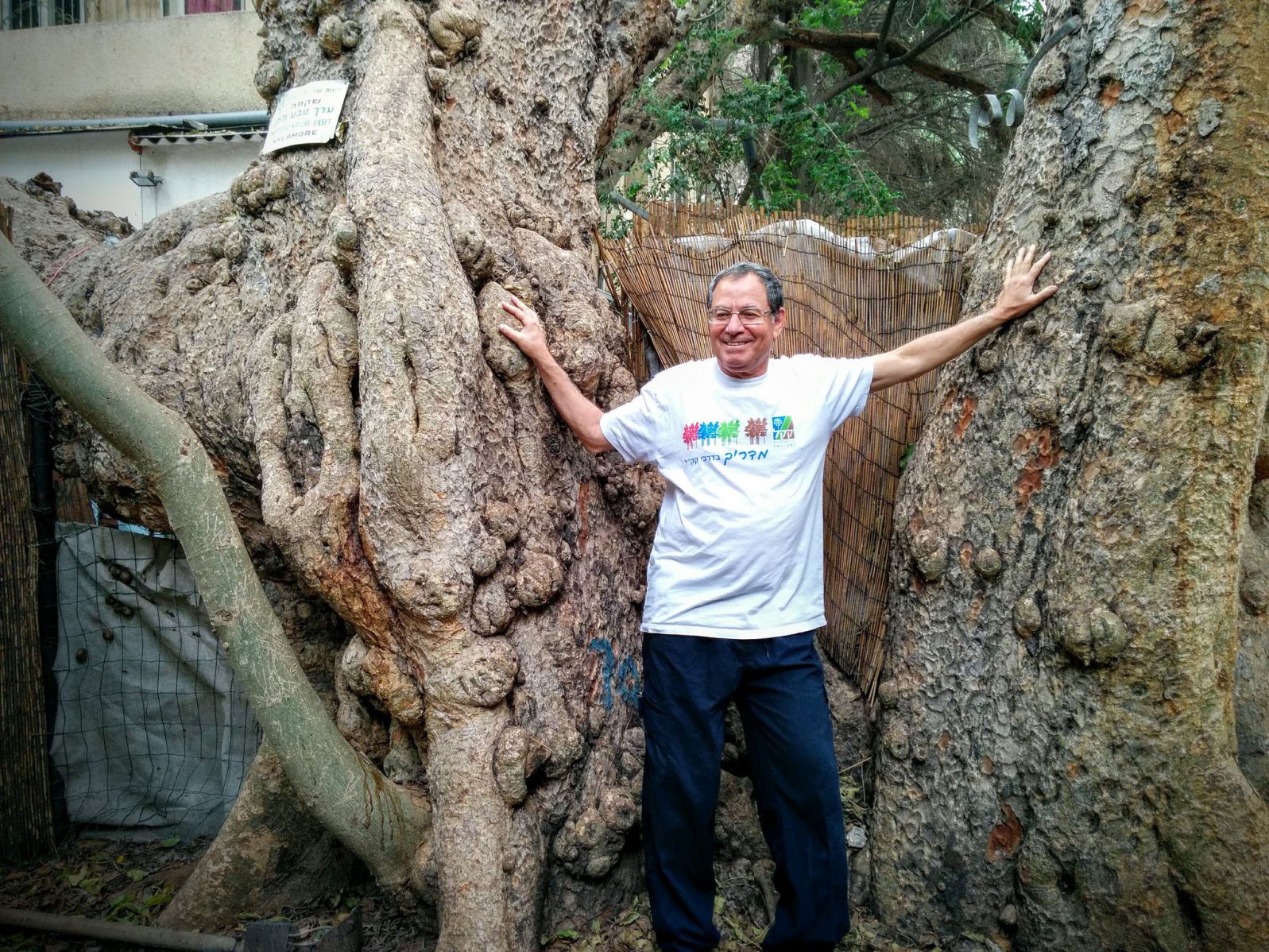 Tree surveyor Yaacov Shkolnik showing the sycamore fig tree that has been in the headlines. Photo by Viva Sarah Press

“If there is one tree that represents Tel Aviv, it’s the sycamore tree,” says Shkolnik, who recently teamed up with the KKL-JNF to show journalists the city’s most amazing trees. “There are songs written about the sycamores of Tel Aviv.”

These big, beautiful trees can be found peppered around the city’s environs. You’ll find sycamores in Yaakov Park and behind the Habima Theater. There are five trees dating back hundreds of years on King George Street. Just outside the city are two famous trees – one in Netanya, with a circumference of more than 12 meters (39 feet) and the other at Holon junction, estimated to be 400 to 600 years old.

We went to visit the sycamore on Oliphant Street in the backyard of a residential building in the heart of Tel Aviv. It actually looks like two trees standing side by side but is in fact just one monstrous force of nature.

“This tree is in the headlines,” says Shkolnik, pointing to the apartment buildings around it. He explains that residents want to develop and renovate their homes but are faced with the dilemma of how to dig without harming the tree’s long roots. But the tree, whose age is unknown, is protected by law.

“It’s one of my favorite trees. It’s really unbelievable that it’s here, in a yard. It’s a beautiful tree and it’s hard to believe it’s in the city,” says Shkolnik. 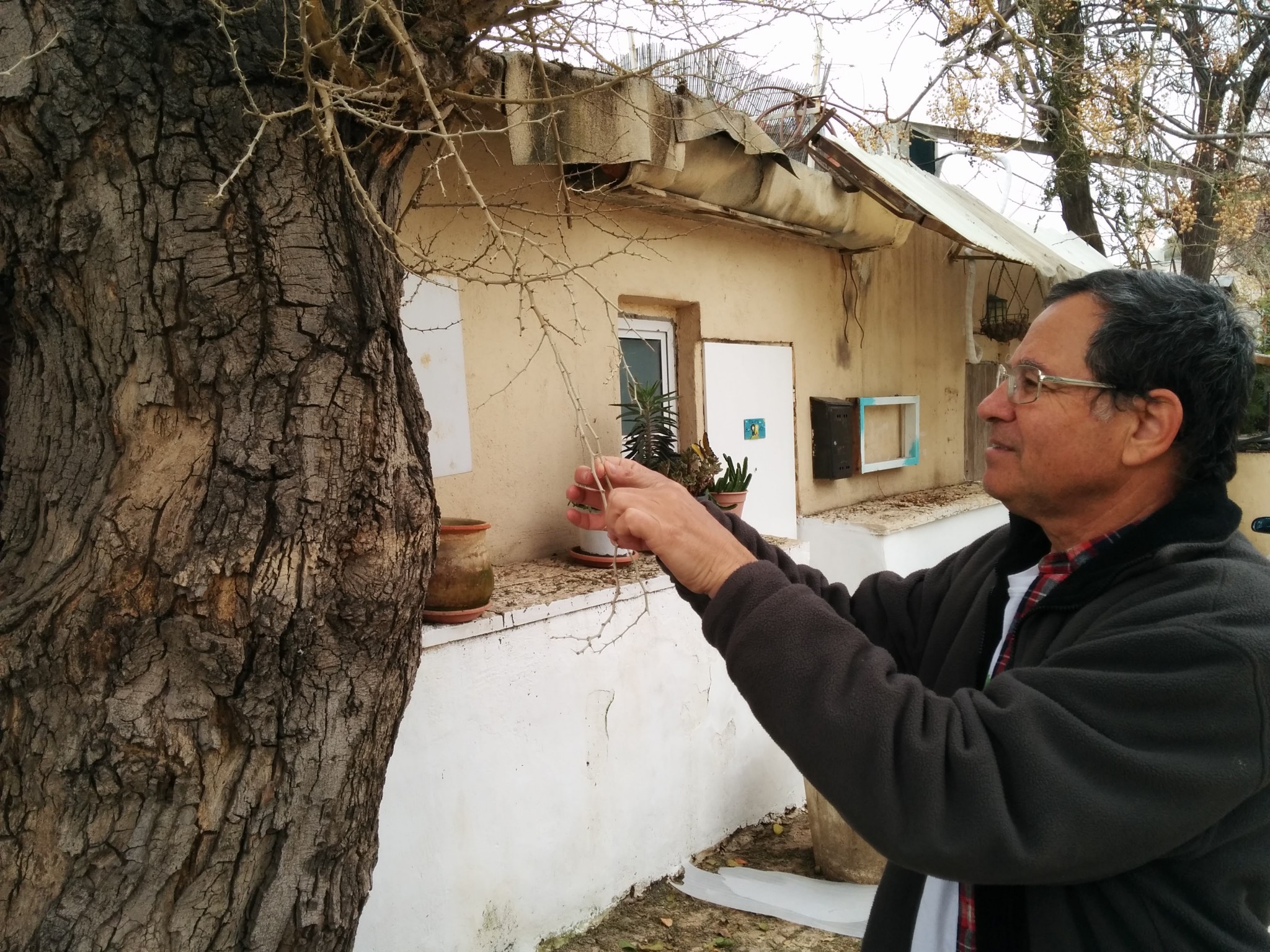 The large thorny tree at the south side of the Suzanne Dellal Center for Dance & Theater courtyard is usually overlooked by most visitors to this beautifully landscaped area of Neve Tzedek. But for tree buffs, the acacia albida –standing its ground alongside a strip of old homes — is the reason to come for a visit.

Shkolnik chuckles at the thought of gardeners back in 1908, given the task of clearing trees to build the Yechiely Girls School and the Alliance School where the Suzanne Dellal center sits today. “The acacia albida is a very strong, very stubborn tree. It must have been very difficult to get rid of it. They probably tried but gave up,” he says, while caressing its thorny branches.

The acacia albida is native to Africa. Shkolnik says it seems to have “immigrated” to Israel through the Nile Valley and up the coast. Today, you can see these trees in Ashkelon, Ashdod, Rehovot, Dor and Tel Aviv.

“You look at the tree and feel like you’re in the savannah. This is the last witness of the wild trees and native trees that were in Tel Aviv. That’s why it’s so important,” he says.

Just south of Tel Aviv in Holon there’s a Bengal ficus tree with a history.

Said to be the largest tree in Israel, this banyan is 15 meters high with a trunk that measures 6.5 meters around.

A sign on the tree says it was planted in 1888. Some say the Mikveh Israel Agricultural School’s  founder, Karl Netter, planted the tree while others say it was the school’s pioneering landscape gardeners.

The tree, if it could talk, would tell about how the Zionist visionary Theodor Herzl came to Mikveh Israel’s old boulevard of palm trees to meet with the German Emperor Wilhelm II.

“It’s a celebrity tree,” says Shkolnik, noting that it is native to the Indian subcontinent and would have arrived in Israel as a gift. “Nobody knows who brought it to Israel.” 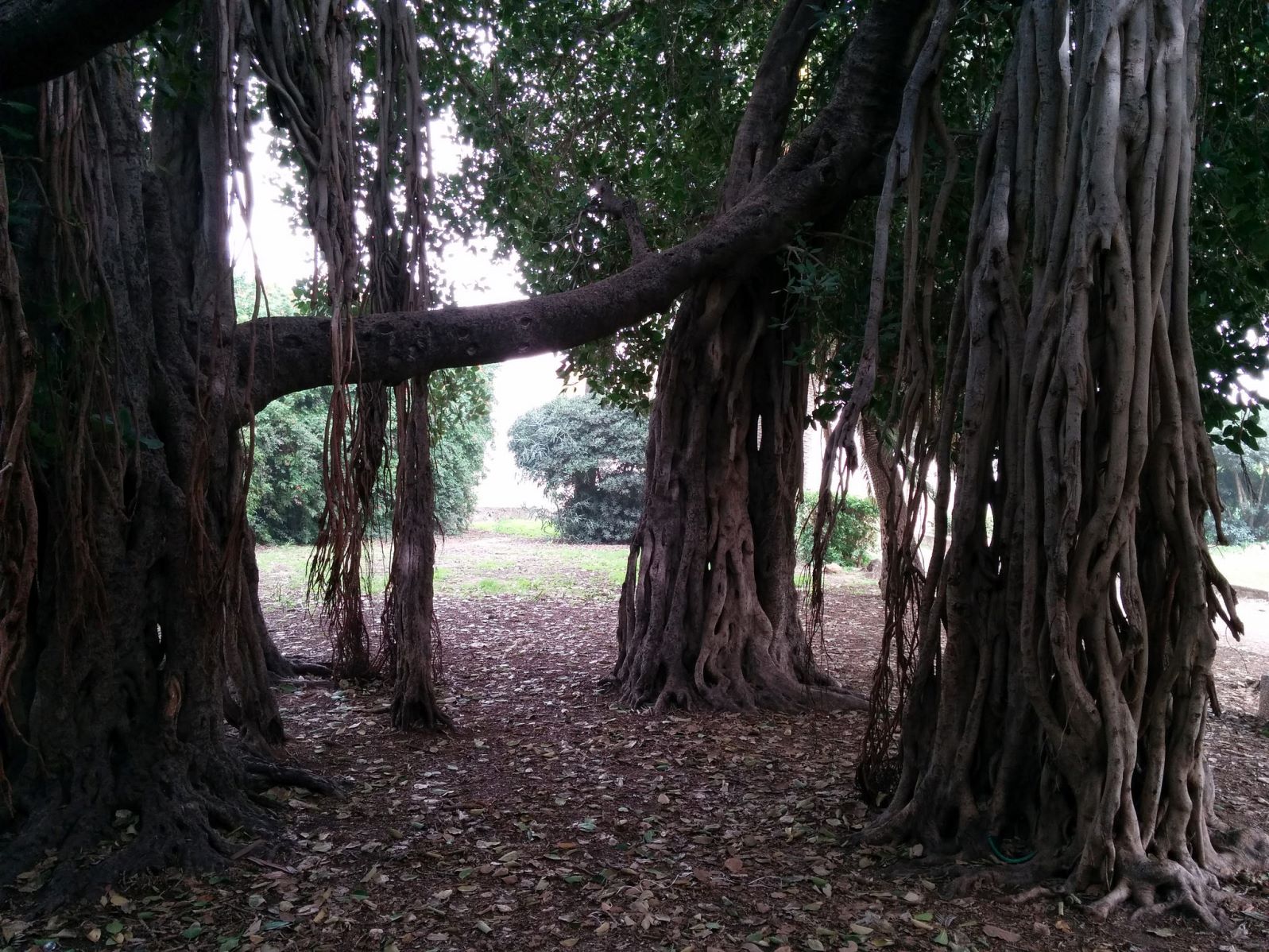 This tree looks like a mini-forest. On closer inspection, visitors will see that the branches and roots are connected. Shkolnik explains that the tree produces propagating roots that grow downwards as aerial roots. When the roots reach the ground they grow into trunks, making it difficult to tell the original tree from its offshoots.

Shkolnik says all the Bengal ficus trees in Kibbutz Sde Eliyahu, Givat Brenner, Rehovot and Tel Aviv are the result of cuttings taken from this Mikveh Israel original.

There are more than 600 species of eucalyptus trees but none as beautiful as the lemon-scented eucalyptus gum tree, says Shkolnik.

“The lemon-scented gum is very rare here. It has a very smooth, yellowish trunk and the leaves smell like lemon. Two were planted in Petah Tikva in the 19th century, but there was a locust attack and only one was saved. There are two [newer] others in the city not far from Beilinson Hospital,” he says. “This is the biggest lemon-scented tree of Israel.”

Located on an otherwise unexciting residential street (Shapira Street), this tree has a sign at the base with a quote from “A Poem to the Eucalyptus” by Hebrew poet Esther Raab, and explains that it is a protected tree.

Passersby can be seen collecting fallen leaves. Crush them together and you’ve got an amazing natural citronella aroma. 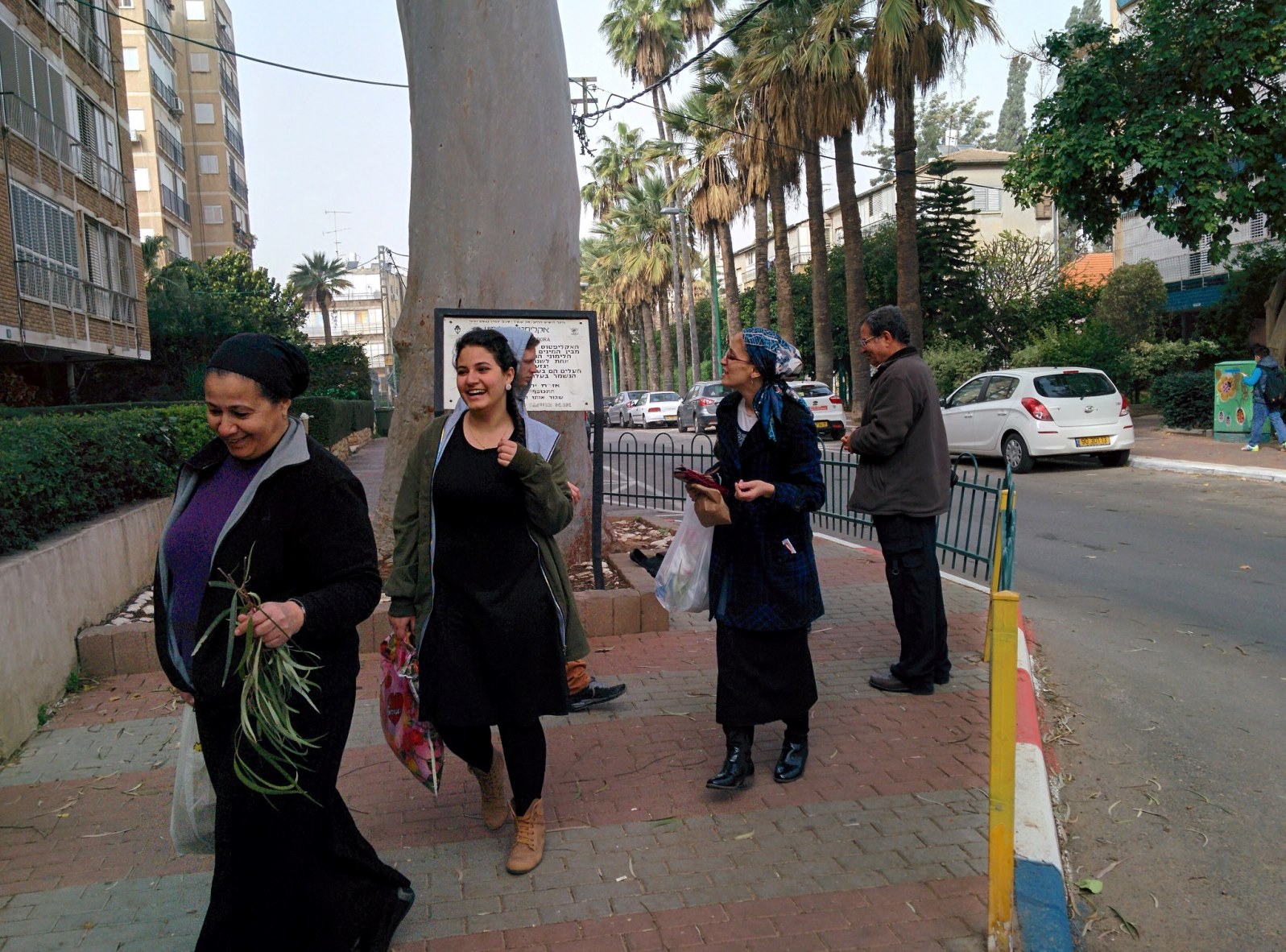 People gathering leaves from the lemon-scented eucalyptus on a street in Petah Tikva. Photo by Viva Sarah Press

Take a moment to feel the tree – the bark is extraordinarily smooth.

Though it is native to Australia and brought to Israel by the KKL-JNF, Israelis today consider the eucalyptus tree among the most “Israeli” of trees.

The ficus microcarpa tree in Weiner Park is said to be the oldest and biggest of its kind in Tel Aviv. According to the municipality, its trunk measures 2.2 meters in circumference and the tree stands some 13 meters tall. The tree is believed to be more than 80 years old.

In 2014, this ficus hit the headlines when residents protested a municipal plan to trim the tree’s roots to make room for a new baby wellness clinic and two kindergartens. Their petition saved the tree.

“The ficus is marked for preservation and will remain where it is, and its roots will not be damaged when the project is carried out,” a Tel Aviv municipality spokesperson said in late 2014.

So, what is your favorite city tree?