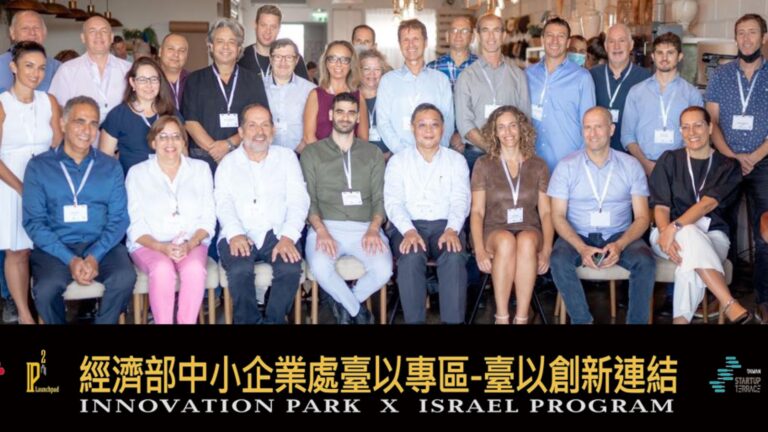 Israeli startups looking to penetrate the Taiwanese market have a friend in the i2i (Innovation to Industry) company’s IP2 LaunchPad, opened in Israel in June 2020.

IP2 ran two cohorts so far in Israel. Based on that success, i2i is now expanding the IP2 LaunchPad, first in Canada and Australia and next in the UK, The Netherlands and Sweden.

Among Israeli IP2 LaunchPad alumni are:

Registration for the third cohort in Israel has begun. “Ten companies will be selected in the fields of digital health, cybersecurity and renewable energy,” said Rani Shifron, who heads the incubator program in Israel.

Participating companies are given the opportunity to work out of the $2.5 billion “Startup Terrace” innovation center in Taipei. Startup Terrace is supported by the Taiwanese Ministry of the Economy and houses 106 entrepreneurs from over a dozen countries.

There’s also a program for veterans of the incubator and for established Israeli companies looking to enter new markets; and IP2 Sustainability, which operates in cooperation with the Israeli NGO Start-Up Nation Central.

“Israel’s innovativeness is known all over the world, and I am happy at the expansion of our existing cooperative efforts and at the creation of cooperative efforts between Israel and Taiwan in new areas through the IP2 LaunchPad program,” said Stanley Tzu-An Tseng, director of Taipei’s Economic and Cultural Office in Tel Aviv.

UNCOVER ISRAEL - Get the ISRAEL21c
Weekly Edition free by email
Sign Up Now!
Bring Israel's story to life.
Millions of people around the world rely on us to gain a deeper understanding of Israel. We are the trusted source for original content you won't find anywhere else.
You can make a difference. Donate today to support journalism that brings Israel’s story alive.
SUPPORT ISRAEL21c
Read more on:   News, Business, Startups, Taiwan