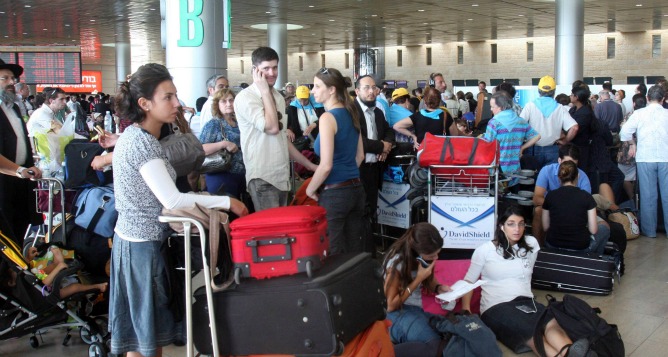 Travelers stuck at Ben Gurion Airport during a strike. Photo by Roni Schutzer/Flash90

American car owners can call the AAA when they get stuck on the road. And until the Iceland volcano, American Express offered a pretty reliable insurance package for stranded air travelers. Today, they have few options when they get stuck in Indonesia, Iceland or even Indiana in the middle of a snowstorm.

Where to eat? Where to sleep? How to catch the next flight home, as soon as possible? SOSTravelers, an emergency online travel service, will soon be able to swoop in — electronically, anyway — and rescue stranded travelers, taking the headache out of finding options in a foreign or remote location.

The company was founded by an Israeli husband-and-wife team, and is partnered with an Israeli travel agent. But the solution is perfectly suited to travelers from the entire global village.

By sending an electronic message via a smart phone, or by accessing the simple online interface, SOSTravelers subscribers will have a direct lifeline in times of travel emergencies.

The startup, which is now in the beta testing stage of its platform, has already helped a stranded passenger get out of India during an airport strike. And when jet fuel contamination at Israel’s Ben-Gurion International Airport grounded passengers for one day in May, the company’s partner agent helped stranded travelers get on their outbound flights as quickly as possible.

In one case, company co-founder Philippe Scheimann was engaged in a Twitter conversation with a traveler, and connected him to local travel agents who could service his flight request. 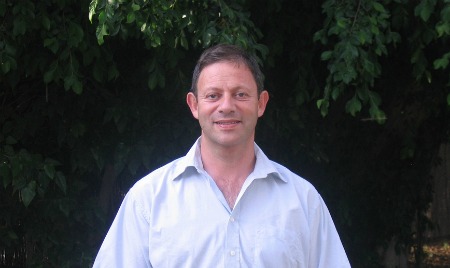 The standard procedure, he tells ISRAEL21c, is for travelers to contact SOSTravelers the second they find themselves in trouble. On-call travel agents will then be alerted according to need.

The company plans on partnering with travel agents around the world, and aspires to be an Expedia of sorts, offering travel insurance as a premium or part of its package of services.

The idea came to French-born Scheimann last year, when he saw mass confusion among travelers stuck in the Iceland volcano fallout. It took some people weeks to get back home. But it’s not just bad weather or freak volcano eruptions that can create an unpredictable travel experience.

In France, frequent strikes affect transportation at the airport, he says, and that’s not unusual. “An average of more than 100,000 people are stuck for more than three hours every day at airports around the world. They really don’t have basic needs fulfilled: finding a place to stay, finding something to eat.”

He relates that some of his own friends stuck in Europe during the volcano event were able to use Twitter (#getmehome, #putmeup) and Facebook to find a rental car or a private home to stay in, but that is hardly an organized solution.

According to Scheimann’s estimates, more than half of all people traveling by air during any given year can expect to experience a delay or cancellation on one of their flights. Millions of people become stranded, with delays that last as short as two hours and as long as days or more. Many airlines throw up their hands, unable to help. That’s where SOS hopes to step in.

Online 24 hours a day, seven days a week, SOS would be the 911 emergency line for travelers. After receiving a request, an SOS partner travel agent would respond with assistance. Since some agents may be able to arrange group discounts for hotels, customers shouldn’t only see this as a boutique service.

SOSTraveler started development in June 2010, and employs a staff of three. The beta service went live this year. Based in Netanya, the self-financed company – co-founded by Ophira Scheimann — is open to investment opportunities.

“At the moment, we do not ask for a fee,” says Scheimann. “The business model is simple. Every travel agent gets a commission on services purchased. People who are in a hurry, most of the time are not looking for special deals. We are not talking about getting them the cheapest flight – but are talking about regular prices.”

A reasonable offer in times of trouble.