New Israeli research demonstrates that plants can ‘eavesdrop’ on their neighbors through their roots, helping them to anticipate and prepare for dangers such as drought. 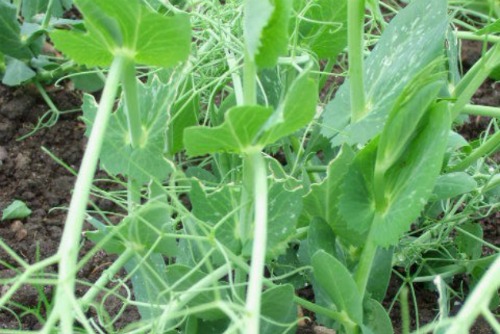 Photo courtesy of Wiki Commons
Pea plants can warn each other of danger.

Plenty of people talk to their plants, believing it encourages them to grow. And although plants can’t talk back, an Israeli research group has discovered that they do manage to exchange vital information with each other.

The team, led by Prof. Ariel Novoplansky of Ben-Gurion University of the Negev, found that plants are able to perceive and respond to warning signals emitted from the roots of stressed neighbors. They can even actively anticipate coming perils and stresses, such as drought, by picking up on vibes from their buddies.

“We tested the hypothesis that unstressed plants are able to respond to stress cues emitted from their stressed neighbors and, in turn, induce stress responses in additional unstressed plants located further away from the stressed plants,” said Novoplansky, who works at the Swiss Institute for Dryland Environmental and Energy Research of the Jacob Blaustein Institutes for Desert Research.

The group’s study, “Rumor Has It … Relay Communication of Stress Cues in Plants,” was published recently in the international peer-reviewed online science journal PLoS ONE.

In Novoplansky’s lab, five garden pea plants were placed with neighboring rows of pea plants on either side. The middle row’s roots were treated with a substance that induces drought conditions.

It took only 15 minutes to see the results once the middle row of peas was exposed to stress. Those plants began to close their stomata – the pores that allow their leaves to breathe – in order to keep in as much moisture as possible. The nearest unstressed neighbors sharing root receptacles also began shutting their stomata.

Within one hour, all the plants with root communication had closed their stomata. However, this did not happen in neighbor plants that could only communicate with the stressed plants via their shoots.

“The results demonstrate that unstressed plants are able to perceive and respond to stress cues emitted by the roots of their drought-stressed neighbors and, via ‘relay cuing,’ elicit stress responses in further unstressed plants,” Novoplansky said.

The study concluded that “plants might be able to communicate underground stress cues and respond to various environmental challenges in ways that have been traditionally attributed to higher organisms. However, rather than implying advanced coordinated networking of the types found in social birds and mammals, the results demonstrate the existence of a simpler type of networking, whereby apparent coordination might hinge on information leakiness and neighbor eavesdropping.”

Novoplansky said that further work is underway to study the underlying mechanisms of this mode of plant communication and its possible adaptive implications for the anticipation of stresses by plants.