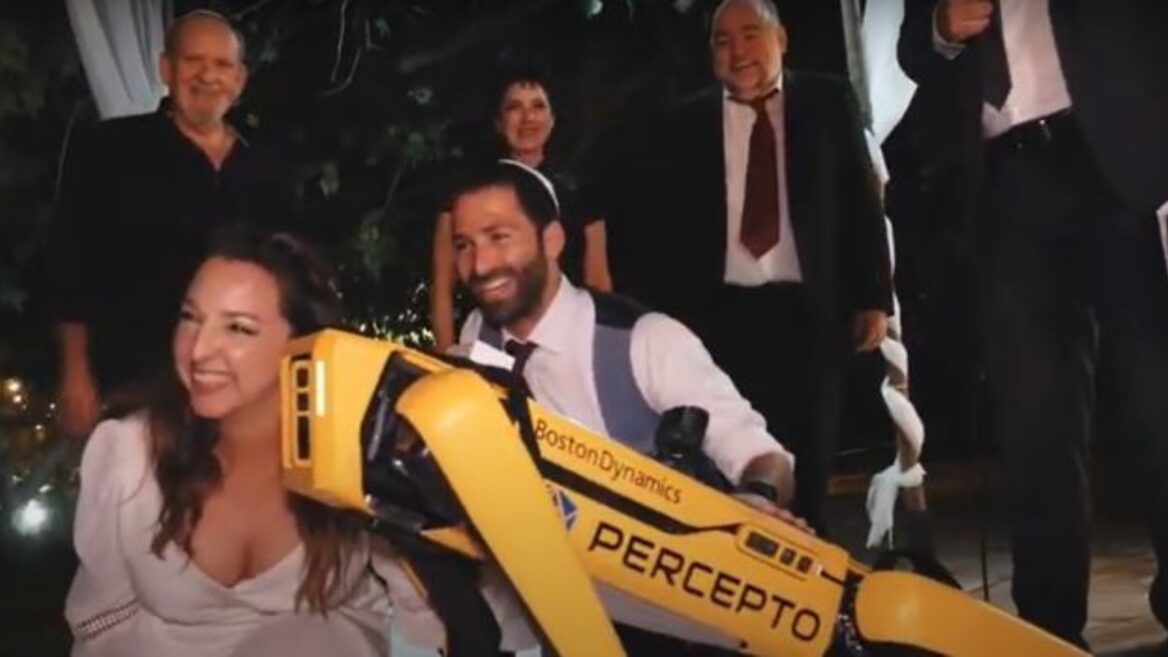 Mishela Rabkin and Tal Levin had an unexpected ringbearer at their wedding. Image from a video by Gili Galdan

When Mishela Rabkin and Tal Levin were joined in matrimony under a traditional chuppah (canopy), they had quite a nontraditional surprise: A Spot robot trotted down the aisle bearing their wedding rings.

Rabkin is an industrial designer and product manager at the development center of autonomous drone company Percepto in Modi’in, central Israel.

Spot, a $74,500 dog-like robot from Boston Dynamics, is one of the most advanced ground robots on the market.

Percepto’s Base for Spot is a smart “doghouse” equipped with Percepto’s autonomous site inspection and monitoring software solution, AIM, named one of the “100 Best Inventions of 2021”  by Time magazine.

Base for Spot, first deployed at Florida Power & Light earlier this year, enables the robot to accomplish autonomous outdoor inspections of industrial facilities and isolated substations even in extreme weather, protected from damage and theft.

Spot’s mission at the wedding was less complex and a lot more fun.

In a covert operation staged by Rabkin’s coworkers, the robotic dog scampered down the aisle to “Who Let the Dogs Out” and brought the rings to the couple.

He even gave a doggie smooch to the bride and joined in the dancing later.

Check out the video – it’s really cute. And there’s no doubt that Spot stole the show on the dance floor.

UNCOVER ISRAEL - Get the ISRAEL21c
Weekly Edition free by email
Sign Up Now!
Bring Israel's story to life.
Millions of people around the world rely on us to gain a deeper understanding of Israel. We are the trusted source for original content you won't find anywhere else.
You can make a difference. Donate today to support journalism that brings Israel’s story alive.
SUPPORT ISRAEL21c
Read more on:   Spotlight on Israel, Weddings in Israel, Robotics, Percepto