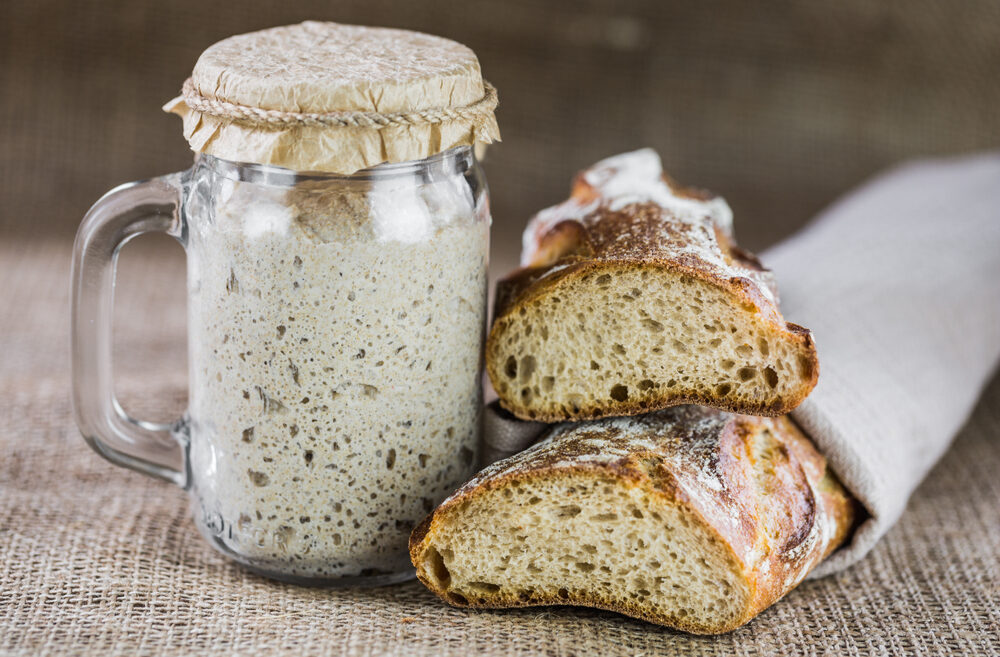 Sourdough starter and a finished loaf. Photo via Shutterstock.com

As a reviewer of cookbooks, I can say unequivocally that most English-language cookbooks these days are focused around dieting fads, with keto, Paleo, whole 30, vegan and ultra-healthy eating at the top of that list. I’ve read through more gluten-free recipes than I care to admit.

It takes something of epic proportions to unexpectedly knock us all to our feet again and press the reset button on the current state of our cultural trends. Something to swing the pendulum back the other way a bit.

The current global pandemic has had more negative than positive effects. People everywhere have suffered. But it’s also true that priorities have shifted.

Some indescribable force has brought us crashing back down to Earth when it comes to our food choices, happily steering us as a society back to bread.

And not just any bread but sourdough, which is the original bread that our ancestors were making tens of thousands of years ago. 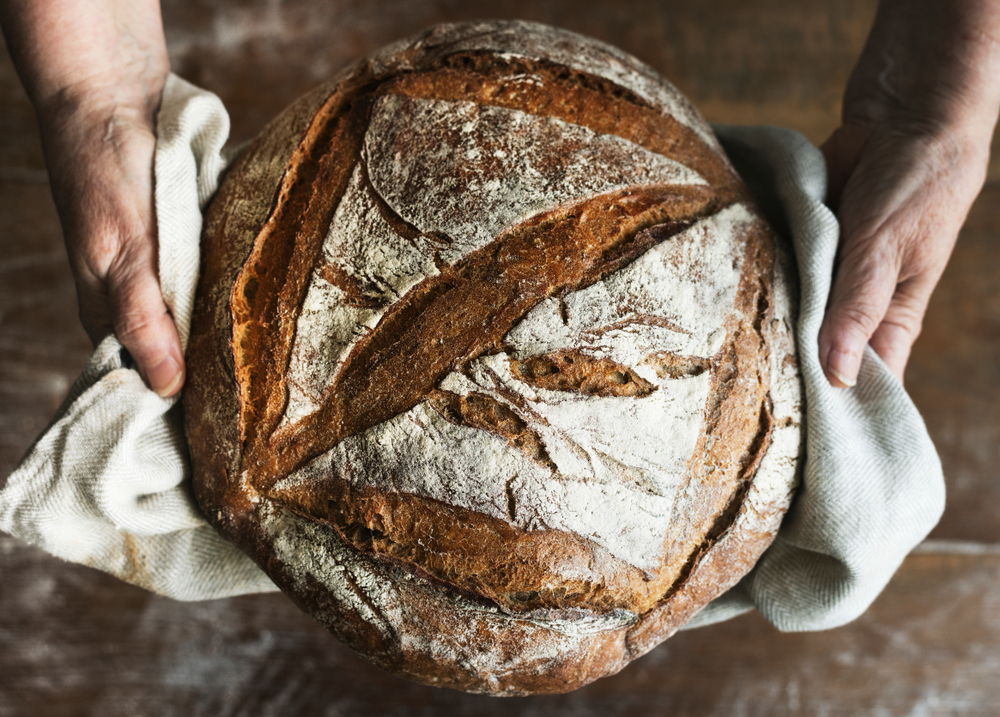 Sourdough is the original bread our ancestors made thousands of years ago. Photo by Shutterstock

Before commercial freeze-dried yeast was widely available in the late 19th century, all that existed was wild yeast. That is exactly what you are cultivating in the sourdough starter that no doubt sits on your counter by now (should you have given into the trend).

I bet you hadn’t considered the fact that yeast organisms live in the very air we breathe, no matter where you are, until you decided to harness their magical powers for your personal use.

Sourdough bread baking involves the successful incubation of a robust starter — that could take days or even weeks– plus maintenance (haven’t you always wanted a pet?) and the application of this living being to the process of baking.

The possibilities range from all the things you can make using your sourdough discard (the stuff you throw away each day when you feed your starter) to those gorgeous, luscious loaves you see everyone boasting about online.

Baking those kinds of loaves requires knowledge and techniques including baker’s percentages, proper formation of a loaf or “boule,” getting just the right rise, baking it in an environment that mimics fancy bakery ovens that release steam while cooking (a Dutch oven replicates this beautifully), and learning to manipulate your oven for optimal results.

For example, you’ll want to bake a loaf like this on maximum heat, then leave it in the oven with the door cracked open once it’s finished baking, for a crust with a light crackly finish that won’t rip out your dental fillings.

To get you started on that first step, you can cheat a little by purchasing mature starter from any reputable sourdough bread bakery. (Think of how much you are helping a struggling business by doing so!)

Artisan bread bakeries having popped up here like snails after an Israeli rainstorm in recent years as our gourmet food scene continues to develop. You can now find them in most large cities. Bakeries like Wild Bread in Tel Aviv and Russell’s Bakery behind Jerusalem’s Machane Yehuda market are good examples.

A baker by trade, I have been baking my own bread for years. It’s one of those things that once you start doing is hard to stop. 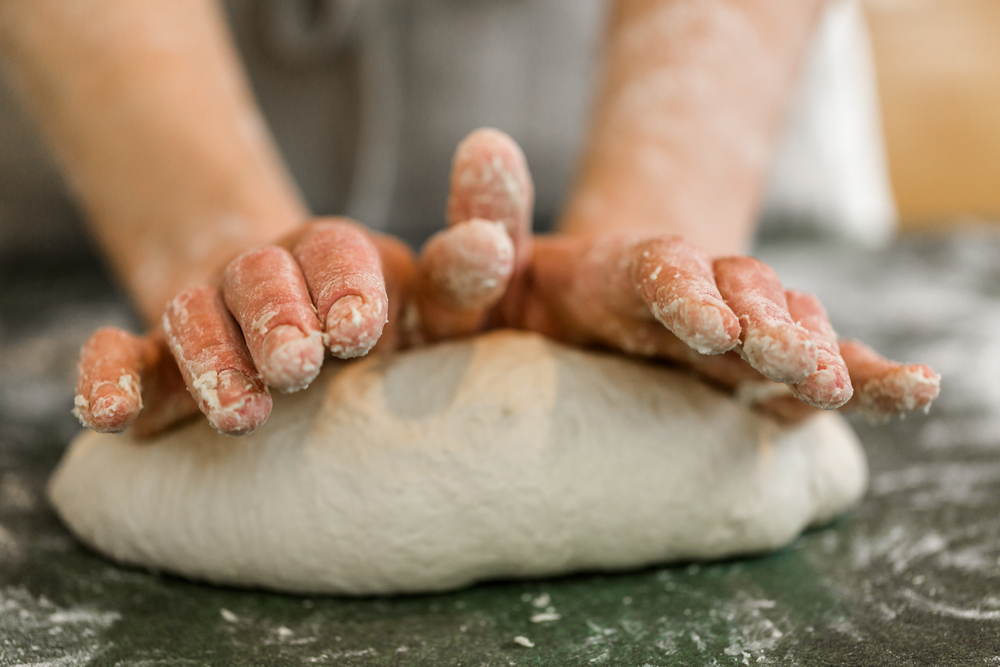 Folding dough for sourdough is a satisfying process. Photo by Shutterstock

Once you realize how satisfying a process it is, from the meditative quality of kneading (or “folding” if we’re talking sourdough), to creating something out of seemingly nothing, to eating something made by your own hands that is free of preservatives and full of opportunity for customizing and perfecting, you just get hooked.

I had long since mastered making artisan-style breads at home using less developed European starters like Poolish and Biga, but it had been some time since I had dipped my toe in the sourdough water.

What’s one true gift in these unsure times? YouTube. Where you can go to give yourself a quick master class in any number of crafts, which is exactly what I did. It turns out, my previous attempts at sourdough, while technically successful, were just the tip of the iceberg.

What really connects us all right now, for better or worse, and makes this crisis so vitally different from the previous pandemics, is social media. It’s where people go to show off the goods, begging everyone else to question why hadn’t they thought of making that? Or simply ooh, that looks so good, I want to eat that right now!

Only now that people have either been stuck in a purgatory of sheltering in place or find themselves adjusting to our new masked reality (literally) defined by making fewer risky trips to the grocery store, have they considered making foods from scratch out of necessity, boredom or the ability to scratch some items off their bucket list. This seems like a perfect time to pursue a new hobby.

All the chefs, bloggers and everyone else begging, borrowing or just cultivating their own sourdough starters has led to the humble/incredulous Instagram shots and Facebook brags we’ve all been witnessing lately, my own included.

Aside from this winning combination of Israeli flavors that Israel recommends eating with “some labane and good EVOO [extra virgin olive oil],” he makes loaves studded with walnuts and dates, whole pitted green olives, or shriveled salt-cured black ones; as well as loaves coated in poppyseeds– a staple of the European-style baking that has dominated Israeli bakeries for decades.

Other variations on the theme include sourdough pitas and focaccias decorated to look like gardens studded with anything from rosemary to cherry tomatoes, which feels oh so Israeli to me.

On a side note, not only do sourdough starters fed with rye flour rise up taller than those fed on white or whole-wheat flour (you can quote me on that), but they also impart a much more complex flavor even in sourdough breads made with mostly white flour.

We mustn’t forget that Jewish rye bread is the favored choice for containing the mile-high stack of pastrami served up at American kosher-style delis, although caraway seeds have never been a favorite of mine.

In any case, the silver lining of this crisis is crystal clear: Bread baking is back, and sourdough has and will always be there to bring us all back down to Earth.