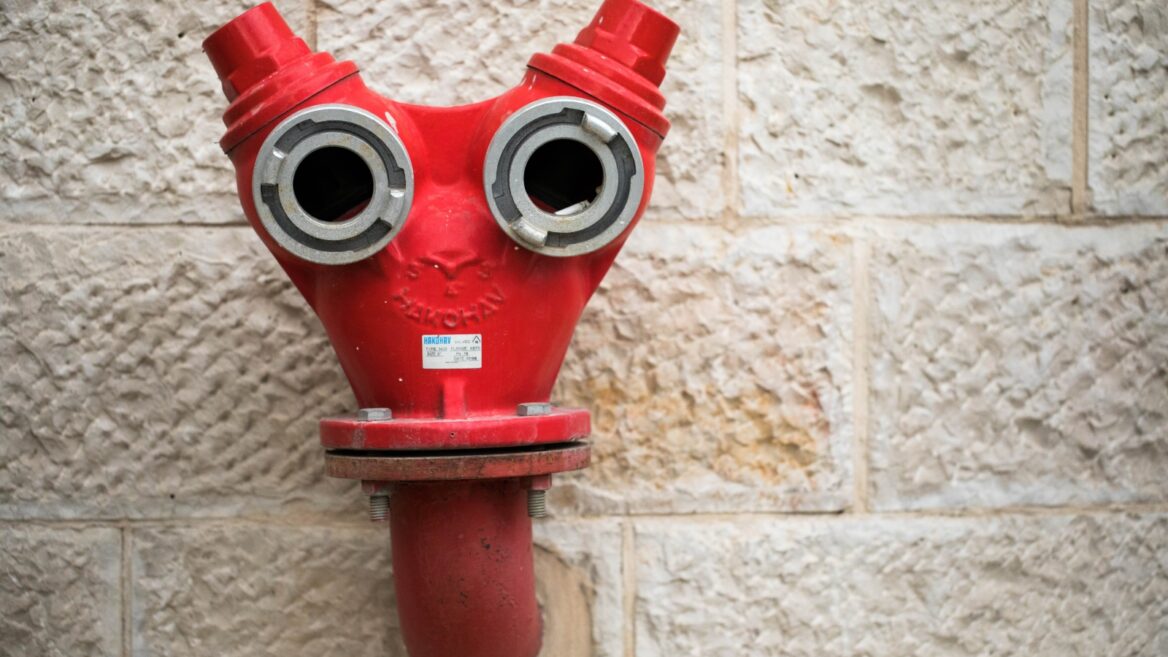 Photo of a fire hydrant in Israel by FLASH90

The lowly fire hydrant would seem an unlikely candidate to receive the Israeli high-tech treatment. But hydrant tampering is a growing problem for municipalities.

Chicago, for example, loses 5 million gallons of water a day to open hydrants or illegal use including water thieves. That costs the city some $9 million a year.

And then there’s the problem of terrorists seeking to poison the water supply by adding lethal chemicals via a hydrant. It’s happened before – although, fortunately, authorities caught the sabotage in time.

It was the latter concern that prompted Dovik Barkay to launch Hydrantech. The startup, based in Ramat Yishay in northern Israel, has developed a smart “electronic bracelet” that attaches to the nozzle of a fire hydrant to monitor what comes out and what goes in.

“If water is flowing out, it’s theft,” Barkay tells ISRAEL21c. “If the direction of the water is the opposite, it can be dangerous.”

Barkay recalls a situation in the Israeli city of Safed several years ago where “someone stole some gasoline, but the police caught up to him. He couldn’t just throw the gasoline away on the street – it would smell – so he found a hydrant and poured the gasoline inside. For three months, people in Safed couldn’t drink the water.”

Each Hydrantech electronic bracelet has a cellular transmitter that communicates its status to a central control hub. That allows a city to spot a problem — whether it’s a leak or a biopotential terror attack — in real time and send a technician or security detail immediately.

The Hydrantech interface runs in a regular web browser, which can be opened in a window in a city’s existing infrastructure-monitoring system. If there’s a problem, a pop-up alarm will appear in the browser and on the mobile devices of those who need to know – such as guards or the utility manager.

Hydrantech’s technology doesn’t sense water flow, Barkay explains. Rather, the bracelet incorporates sensors including an accelerometer. The sensors can “see” and “hear” the movement of water. That data is sent to the Hydrantech cloud where software algorithms interpret whether water is moving out or in.

Hydrantech’s bracelets are being piloted in several Israeli municipalities, including Haifa, Petah Tikva, Safed, Rosh Ha’ayin and Tel Aviv. The fee of about $3 per hydrant covers the bracelet, the monitoring software, cellular service, battery changes and software upgrades. 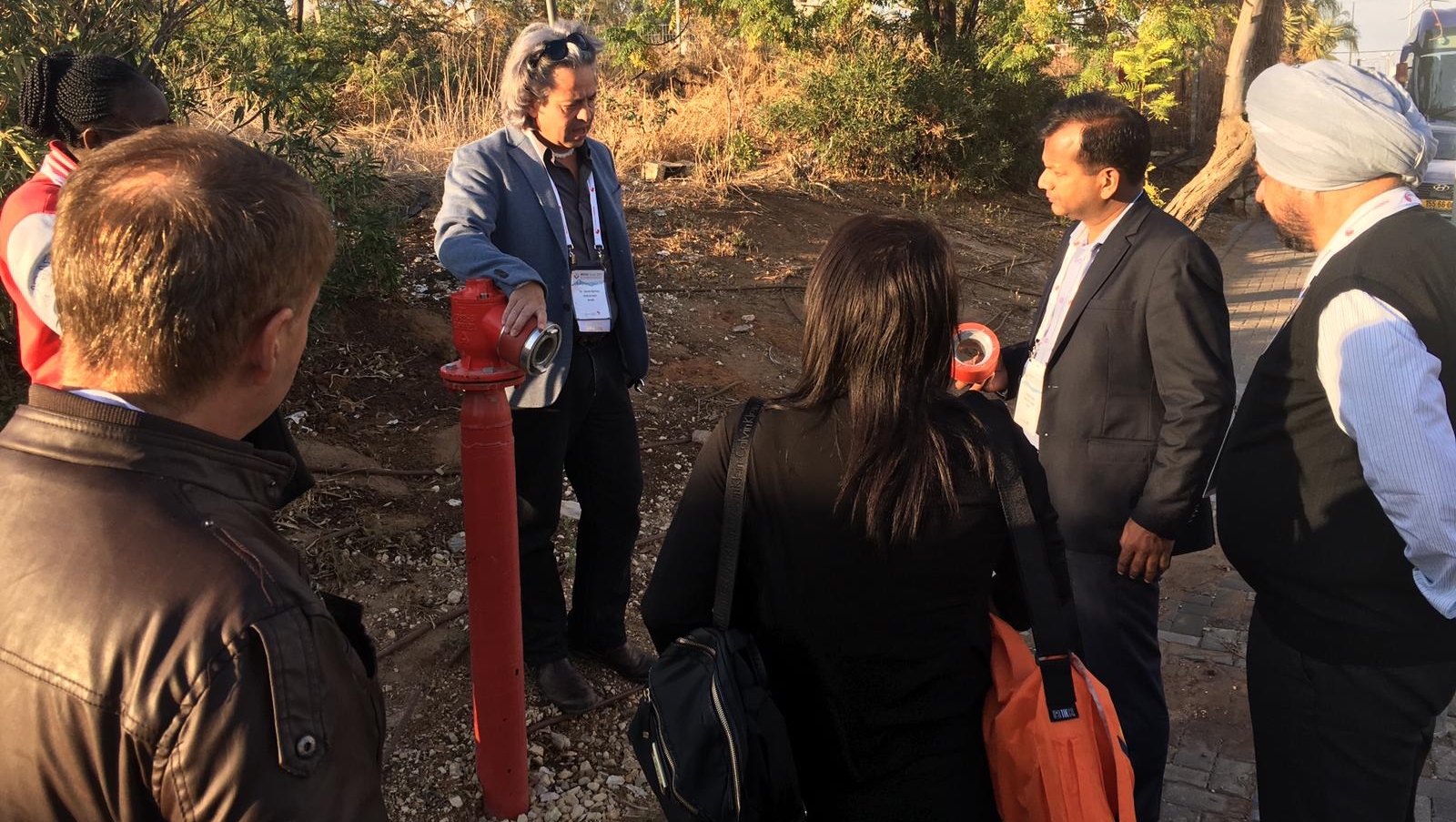 We asked Barkay how he got interested in fire hydrants. It’s not such a stretch: Barkay, whohas degrees in law, industrial engineering and medical device development, has several water-tech exits under his belt.

Ten years ago, he founded a company that detects leaks in home water systems. His next company developed a smart pump that delivers hot water immediately from your solar heater to your faucet, “rather than needing to wait three to four minutes until the water heats up.”

While working on Hydrantech, Barkay is also CEO of FeedWell, which has developed a “massage bra” that increases milk flow for nursing mothers. FeedWell’s main product, “CupIt,” is sold through Israel’s four main HMOs.

Hydrantech has raised about $1 million in private angel money and is raising more. The company employs seven people.

There is little competition in the field Hydrantech has addressed.

Mueller Streamline, a world leader in copper piping, has a product that closes a valve if it detects a problem, Barkay says, but it’s not a “smart” device that communicates with a central hub.

Sieglock Spartan has developed a high-tech hydrant that swaps the typical steel, iron and rubber parts for “virtually indestructible” stainless steel that can survive storms and salty water. But it’s a replacement for existing hydrants, not an upgrade. That’s proven to be a snag because municipalities have stockpiled replacement parts.

It’s not all that surprising that a company like Hydrantech is a blue-and-white Israeli invention.

Located in the dry Middle East, where over 60% of the country is desert, Israel reclaims 90% of its wastewater, compared with just 6% in the US, and is a well-known leader in water desalination technology.

The country’s annual Watec conference attracts thousands of visitors from around the world.

Hydrantech was among the hundreds of companies that displayed water-related technologies at the most recent Watec in November 2019. Other companies included NUFiltration and Lishtot. The Israel Export Institute reports that Israel exports $2.4 billion annually in water technology and equipment.

Hydrantech has plans to detect more than just water flow in the future. The same technology will be able to spot underground water leakage, measure temperature and humidity and even provide data about earthquakes. And since it’s software, the more it “learns,” the smarter it gets.

The World Health Organization estimates that by 2025, “half of the world’s population will be living in water-stressed areas”. That makes technologies like Hydrantech’s all the more important in solving current and future environmental challenges.