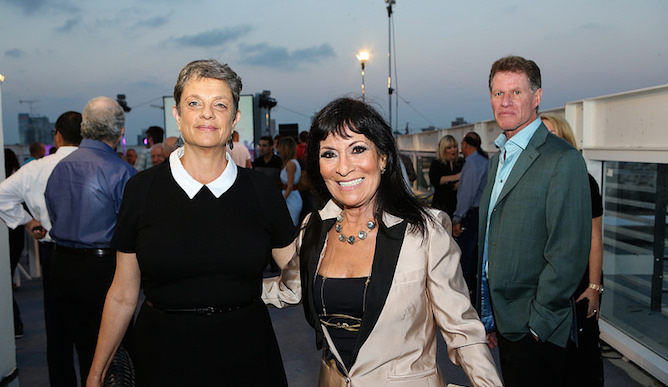 Imagine a world where ice doesn’t stick to airplane wings, car windshields or electrical lines. A world where grime and graffiti are easily cleaned off walls, and windows repel dust.

That world will soon be our reality, thanks to novel nanotechnology developed by Prof. Hanna Dodiuk, head of the polymers and plastics engineering department at Israel’s Shenkar College of Engineering and Design.

Her lab’s biomimetic (mimicking nature) coatings, introduced to the industry this week at the June 15-18 Nanotech 2014 conference in Washington, DC, are designed to be more effective, more durable and more environmentally friendly than anything currently on the market.

She came to Rafael (then ADA, a subsidiary of the Defense Ministry) in 1979, two years after earning her doctorate in chemistry from Tel Aviv University. During 18 years there, she became a renowned expert in adhesion technology and devised coatings used widely in the avionics, aeronautics and defense industries. She has 15 patents to her name and become Rafael’s first female senior manager.

“With that expertise, I decided to finish my dream and go back to academia,” Dodiuk tells ISRAEL21c.

Named for a grandmother murdered at Auschwitz, Dodiuk was raised by parents who were rescued from the Nazis by the legendary Oskar Schindler. They urged young Hanna to get a good education and choose a portable profession in case she might have to flee her home as they did.

“I was in love with philosophy, but it’s hard to make money in that, so I chose chemistry. I also felt that I need to leave a signature,” says Dodiuk, who recently celebrated 20 years at Shenkar and published two books. “For me, the need to show the world that we are here, and no one can make us vanish, is a real motivation.”

In 1991, Dodiuk successfully lobbied a corporate selection committee to consider her for a managerial position among eight male candidates – unheard-of in an industry that is largely an “old boys’ network” of army veterans.

“I showed the Germans we exist and I showed the [Rafael] management I could be a very good manager,” says Dodiuk with pride.

She and her former supervisor, Shmuel Kenig, went to Shenkar to propose a polymers and plastics course of study. She started teaching there two years before leaving Rafael and now is a full professor; Kenig is dean of engineering.

Dodiuk’s coatings are desperately needed for everything from commercial modes of transportation to medical devices, she says.

Through Shenkar’s PhD program with the University of Massachusetts-Lowell, sponsored by the Pernick Foundation, two of Dodiuk’s graduate students are fine-tuning the product in a nano-manufacturing lab. Massachusetts is financing the project because ice buildup is a huge problem for aircraft and electrical infrastructure in the cold Northeast.

“The coating idea was invented about 10 years ago, but we had to prepare it in a way that the price, production and durability are reasonable or no company would adopt it,” says Dodiuk.

“The problem of durability is the hardest. Every day on the Internet you see new commercial materials meant to repel ice, and I’ve tried them all. They don’t work.”

She says she will not commercialize her product until she is sure it lasts many years. Meanwhile, her lab has developed a repair kit for recoating after two or three years.

Dodiuk’s invention was inspired by her study of leaves.

“Around 1999, I was invited to Bayer AG in Germany as a consultant to develop a coating to which nothing would adhere. In medical devices, it is important that the surface does not get wet. I looked in the literature and nothing was there. So I went to nature.”

She discovered that leaves repel water because the surface is made up of nanoparticles and microparticles. “The space between them is so small that water cannot penetrate and it runs off,” Dodiuk explains, likening the structure to a bed of nails. Her course of action was clear: create a technology that mimics leaves’ hydrophobic quality.

When the Israeli minister of defense approached her about solving the problem of ice adhesion on plane wings, she realized the same principle could work. “So we began the project, originally for defense, and were the first in the world to prove that if the coating is super hydrophobic it really diminishes adhesion of ice by a factor of 18.”

Dodiuk has spent sabbaticals at the Polytechnic University of New York, the New Jersey Institute of Technology and U-Mass Lowell’s Center for High-Rate Nanomanufacturing, among other places.

She consults for companies that make advanced coatings for dental applications, microelectronics for special adhesives and coatings, and polycarbonate as a substitute for the more expensive glass.

She also is passionate about encouraging girls to go into the sciences and technology. Shenkar President Yuli Tamir, also a woman, nominated Dodiuk as special counsel for women’s affairs.

Dodiuk has one daughter who is a lawyer and another who is a dermatologist, both currently working in North America but planning to return to Israel with their husbands and children.

“I remained very close to them through the years,” says Dodiuk. “I hired people to cook and clean but I knew I could not buy time with my daughters. Whatever I did in life, I always made time every day to be with them. So they were never angry about my career and they are also trying to reach the sky while giving love to their kids because they know it can be done.”

UNCOVER ISRAEL - Get the ISRAEL21c
Weekly Edition free by email
Sign Up Now!
Bring Israel's story to life.
Millions of people around the world rely on us to gain a deeper understanding of Israel. We are the trusted source for original content you won't find anywhere else.
You can make a difference. Donate today to support journalism that brings Israel’s story alive.
SUPPORT ISRAEL21c
Read more on:   Innovation, People, Technology, Rafael