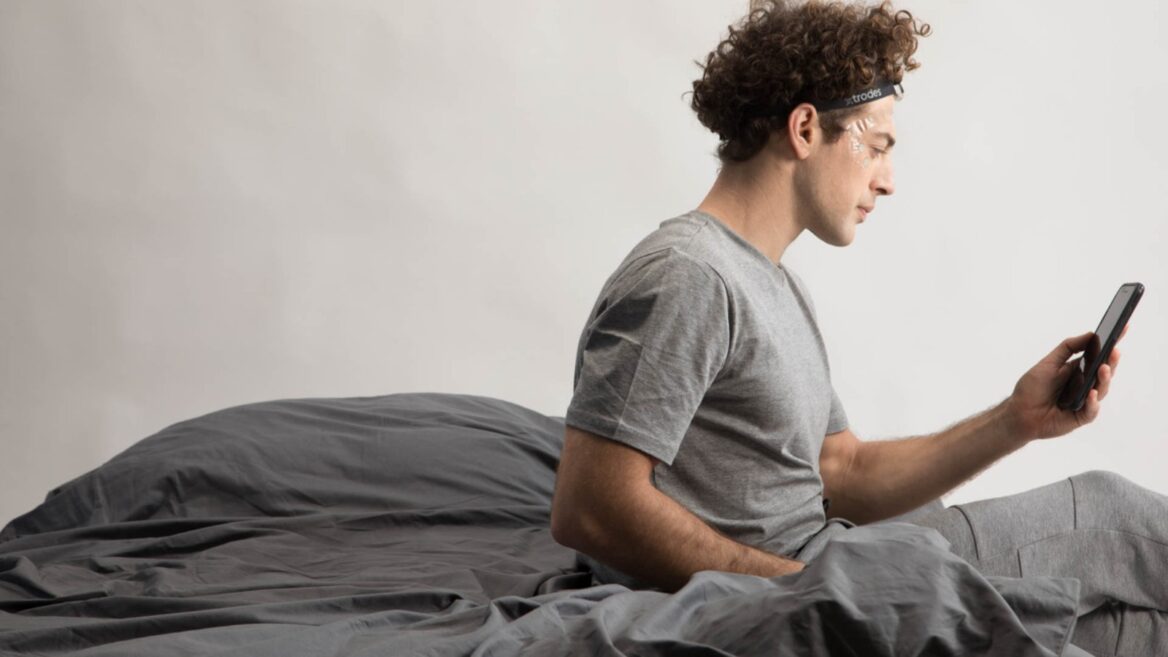 When my wife was having trouble sleeping, her doctor referred her to a sleep lab. The lab gave her two options: She could spend a night at the hospital or take the monitoring equipment home and sleep in her own bed.

She opted for the latter.

The equipment was cumbersome, to say the least – elastic belt bands to measure her respiration; a finger oximeter to monitor oxygen levels; a thin wire taped to her nose and mouth; and a large device the size of an old-fashioned Walkman to record the results.

With all that equipment strapped to her body, it’s a wonder my wife could sleep at all. And she couldn’t turn on her side, which is how she normally gets her z’s.

X-trodes’ solution can be used in a sleep lab or, ideally, at home. The company raised $4.7 million earlier this year from Japan-Israel High Tech Ventures, Welltech, and private investor Jeremy Coller.

X-trodes’ “Smart Skin” is not just for sleep.

“There are over 100 medical uses for electrophysiology,” X-trodes CEO Ziv Peremen tells ISRAEL21c. “We decided to focus on two for our first product – sleep and remote rehabilitation for muscle injuries.” 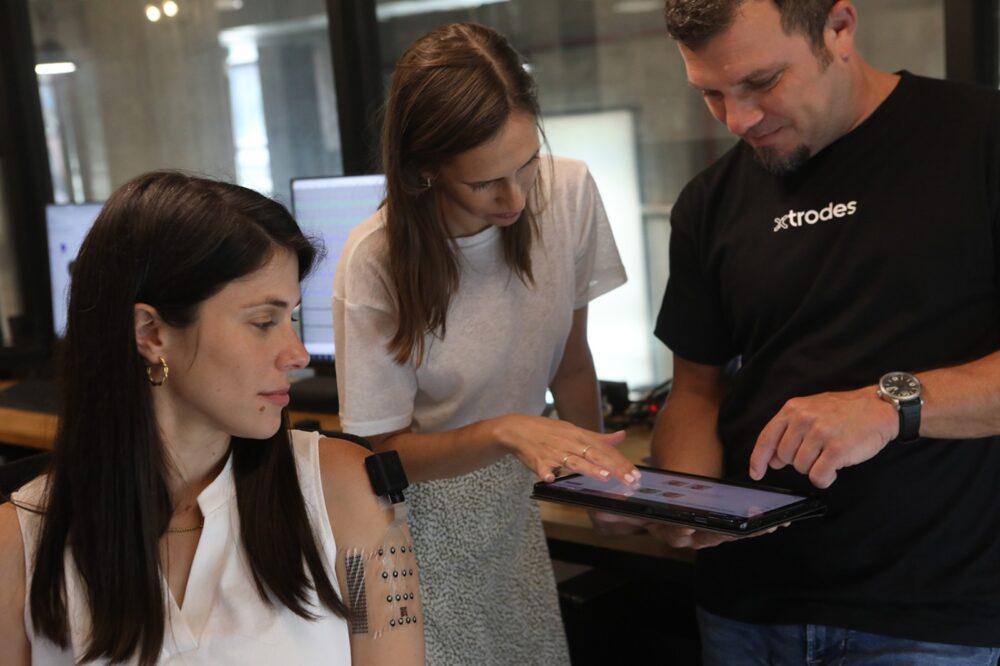 The technology has been in development for some 15 years, led by Yael Hanein, professor of electrical engineering at Tel Aviv University. Hanein became interested in electrophysiology when she was at the University of Washington in Seattle.

“At some point very early on, I came across this open issue of ‘How do you make skin electrophysiology better?” she tells ISRAEL21c. “Everyone was limited by these wires and large equipment, but we didn’t have a solution. Now we do.”

The university’s technology transfer company, Ramot, facilitated the license of Hanein’s work to launch X-trodes in 2020. Hanein now splits her time between her university research and her position as CTO of X-trodes. (Her electrodes were recently used in a Technion study to detect “liars” by the movements of their facial muscles.)

Smart Skin electrodes are made of a soft and flexible material. Each one looks like a small sticker but contains more than 10 layers. These electrodes are disposable but you can shower with them. Photo courtesy of X-trodes

These electrodes are disposable. “You throw them out after a few days, although you can shower and even bathe with them,” says Peremen.

Just a strip of medical tape keeps the wireless electrodes in place. They transmit data over Bluetooth to a small receiver, which sends it on to the patient’s (or physician’s) mobile device. The data is meant to be integrated into a physician’s existing software systems.

“We try to provide the exact same information a physician would get from a sleep study, to make it as seamless as possible to the physician’s current flow,” Peremen says.

He notes that up to a third of the US population suffers from some sort of sleep disorder, but most are averse to going to a sleep lab.

Because there are more than 30 types of sleep disorders – from plain vanilla insomnia to narcolepsy and RBD (REM sleep behavior disorder) — Hanein envisions patients wearing their X-trodes for several nights.

“A one-night test may tell you nothing,” she says. “If it’s episodic, the problem may show up one night and not the next.”

Although gadgets such as an Apple Watch can track your sleep, “They’re not medical grade,” Peremen points out, “and they’re nearly entirely focused on apnea. We’re not familiar with anyone that can reach the same level of quality as we can.”

For muscle rehabilitation, X-trodes can monitor what’s happening while one walks or runs and optimize post-injury programs with personalized assessments.

“You can jump with it, cycle, walk, run,” Peremen explains.

The technology can measure real-time muscle patterns, rate of fatigue, and symmetry between the legs.

“Balance is a big issue in injuries and rehabilitation,” Peremen notes. “If you have an injury and you don’t do the rehabilitation process correctly, the pain can become chronic.” 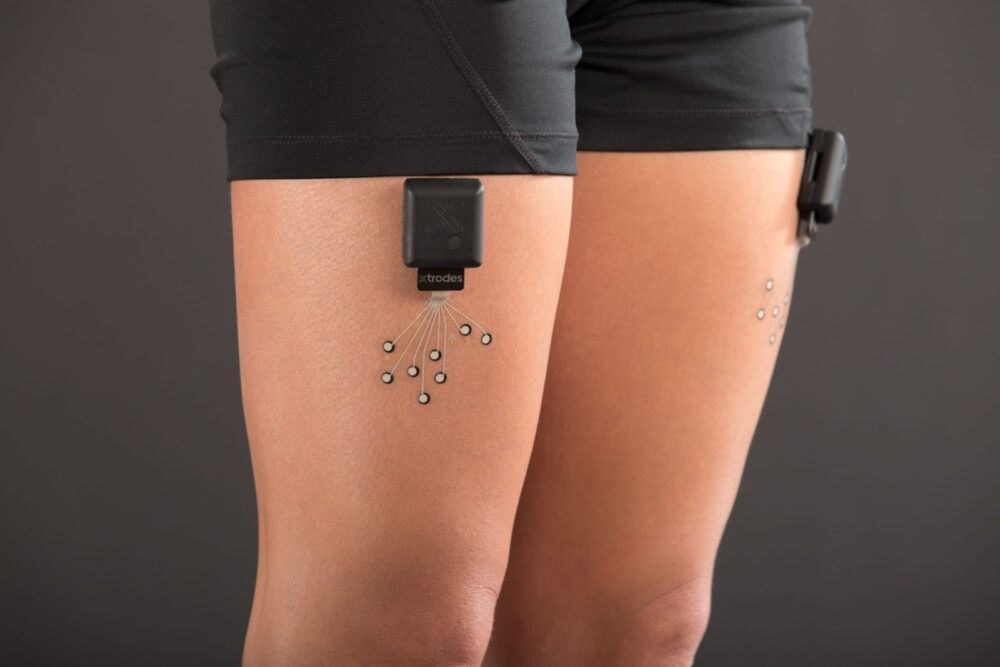 X-trodes is not just hardware: machine learning and smart algorithms quickly compare the data from a patient wearing the device with the results from other patients that have been uploaded to the X-trodes cloud.

For sleep, you attach four electrodes to the forehead, two next to the eyes and two on the chin. For muscle rehabilitation, it’s a total of 16 electrodes.

“When you see it, it seems like science fiction,” Peremen says. “It’s really exciting to see that we can expand the horizon of what can be done with medical-grade monitoring and to make it accessible to many people. It’s not just a medical device. It’s a data solution that gives us access to data that’s unattainable today.”

The X-trodes product is currently being tried out by 20 research groups around the world. Submission to the FDA is planned in 2022 in the hope of having a product approved and available by Q2 2023.

Building a company during Covid 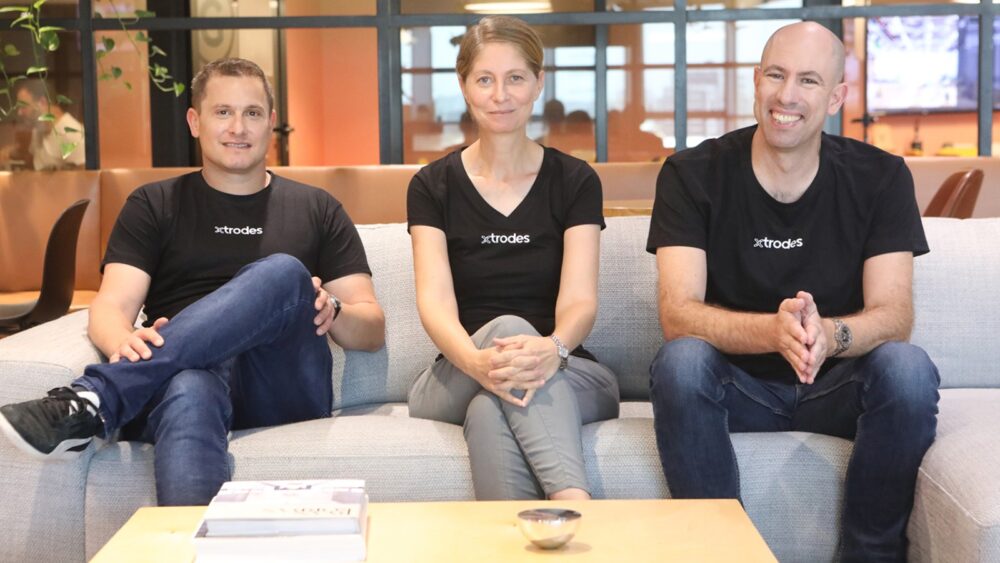 Did Covid-19 impact the company’s trajectory? “The fact that people can’t access decent sleep testing was something well-known even before Covid,” Hanein tells ISRAEL21c.

“Still, we’re very proud that we managed to build the startup, hire people, get funding, learn how to communicate with investors and staff online, all during Covid-19.”

For more information on X-trodes or how to join the company’s current at-home sleep studies,  click here

UNCOVER ISRAEL - Get the ISRAEL21c
Weekly Edition free by email
Sign Up Now!
Bring Israel's story to life.
Millions of people around the world rely on us to gain a deeper understanding of Israel. We are the trusted source for original content you won't find anywhere else.
You can make a difference. Donate today to support journalism that brings Israel’s story alive.
SUPPORT ISRAEL21c
Read more on:   Health, Technology, X-trodes, sleep disorders