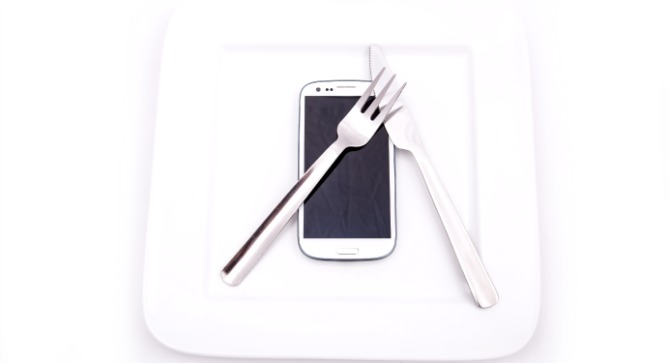 Combining food and phone is a natural for Israelis. Image via Shutterstock.com

Israelis are passionate about food and phones. So it’s no surprise that among the plentiful Israeli-made smartphone applications are shortcuts for locating restaurants, finding recipes, ordering takeout and deciphering nutrition information on packaged goods.

Many of these apps are, at least for now, available only in Hebrew (such as App-to-Eat, ZapRest, CupsTelAviv and LikeEat). Here are six that are already available in English. Check them out in Israel and/or abroad.

1. The Fooducate app uses your iPhone, iPod touch, iPad or Android OS camera to scan a product’s bar code and “grade” its nutritional quality from A to D, using a proprietary algorithm. If the grade is lackluster, it will suggest more healthful alternatives. Designed primarily for use in the United States, Fooducate offers several versions, so if you have issues with gluten or diabetes, for example, it will help you make wiser choices. Its ever-growing database includes more than 200,000 unique products.

3. Based in Tel Aviv and San Francisco, Tapingo for iPhone, Android and BlackBerry devices (also on the Web) lets college students in Israel and the United States order from eateries in the area of their campus. You use a mobile menu, pay from your phone and specify a time to pick up your food or have it delivered. The app remembers what you ordered last time so you can order it again with a single click. It will also make recommendations based on your preferences and suggest alternatives if the restaurant is out of what you ordered. Regular users get specials and rewards.

5. Say you’re shopping for a jar of olives in Israel’s Supersol supermarket chain. With the Marketplace Israel app for iPhone and Android (there is also a website), you can point your camera at the barcode to find out – through the magic of crowdsourcing — that the same brand is selling for three shekels less at Rami Levy, but on the other hand Supersol is running a “buy two, get one free” sale. Marketplace Israel is highly popular in the Israeli AppStore and comes from the fertile imagination of Barak Cohen, who built large-scale social algorithms for Sears.

6. Hosting a party in Israel and find yourself with perfectly good leftover food? Find out how to donate it to the closest food agency by using the Leket Israel app for iPhone and Android. Leket Israel is the country’s largest food rescue network and the first nonprofit in Israel to design such an app, according to Founder and Chairman Joseph Gitler.