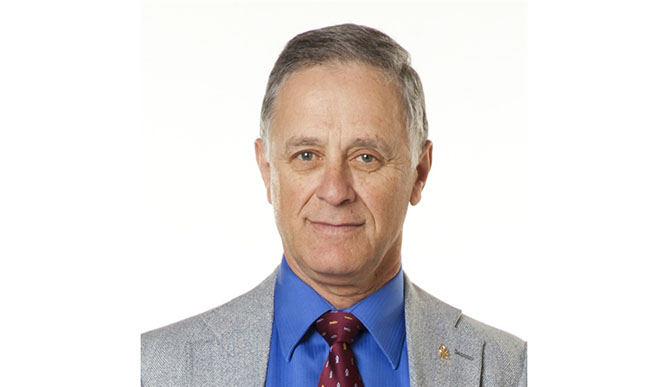 “The world so far talks about climate change -- and does nothing but discuss it all the time,” says fuel pioneer Prof. Moti Herskowitz.

It’s been a vision and a dream since post-industrial revolution scientists understood there was a problem with burning coal and oil: an alternative fuel made from the basic and plentiful elements on earth.

Could the answer be as simple as water and air?

An Israeli research team from Ben-Gurion University has developed something that seems like fuel for the futuristic Jetson family. But Prof. Moti Herskowitz estimates that in only 10 or 20 years, when the cost of hydrogen becomes low enough to be competitive, his innovation could replace pollution-causing jet fuel.

Being realistic, he doesn’t think that solar will ever be viable for the aviation industry, the market where his hydrocarbon-based fuel could have the greatest impact.

As a chemist and the vice president of R&D at the university, Herskowitz works with team members Prof. Miron Landau and Roxana Vidruk on the complicated science behind this big idea.

The goal is to connect their research-based system to a real-life smokestack to eliminate greenhouse gases at the source.

He is not the first to come up with the idea of taking CO2 (carbon dioxide) and reacting it with H (hydrogen) separated from water, with CH2 (as hydrocarbon chains) and H2O (water) as the output. But he is sure that his method promises the highest efficiencies.

The system can yield more than one kilogram of hydrocarbons per kilogram of catalyst per hour, with over 90 percent CO2 conversion rates.

He tells ISRAEL21c: “We are the most efficient. And the product we get is excellent for producing liquid fuels — all hydrocarbons. Take this product and just fill it into a refinery.”

Herskowitz’s invention is not at all like crude oil, a complex material that needs elements removed before it can be burned.

“Ours is a pure mixture of a limited number of hydrocarbons as an excellent feedstock. We can use processes of oligomerization or aromatization –– well-known processes that can be purchased, or we can feed this [material] to the refinery.”

A catalyst is a material that speeds up a reaction, sometimes between two materials that normally wouldn’t react. The catalyst in this case is based on the plentiful and cheap materials iron, oxygen and aluminum, Herskowitz reveals.

What’s also promising about this approach is that the fuel feedstock is made under relatively low pressures, about 20 bars, meaning no dangerous explosions. The reactions take place at a maximum of 300 degrees C, considered quite low and safe. And the output is water that can be recycled back into the system.

A scientific paper outlining the basic science will be published in about six months. Meanwhile, Herskowitz is guarding the IP like a hawk as the research team searches for a strategic partner, preferably a company already producing hydrogen, such as Hydrogenics or Siemens.

Depending on the big H

The Israeli research advancement was announced publicly at the Bloomberg Fuel Choices Summit in Tel Aviv in November.

The next step is to scale up to commercial capacity, which Herskowitz says can be accomplished “without doing more than what we are doing here in the lab. We are using tricks to make it high yield.”

While true commercial scale of these processes will probably happen anyway in 10 to 20 years, Herskowitz says he doesn’t want to wait and is already talking with big players to start building a demo site close to the source of reasonably priced hydrogen and CO2.

A hydrogen refinery would be a good place to start, as it emits carbon dioxide at the source as well.

Instead of just talking, this fuel actually has legs that can walk, the professor says: “The world so far talks about climate change — and does nothing but discuss it all the time. The point is that no one really knows what is happening and they are still burning [fossil fuels] like crazy. The question is if we can withstand this [process], and for how long.

“And when did natural gas become green?” he asks rhetorically. “This is ridiculous. It’s all PR. What we are talking about here [in the lab] is something that is real. How fast we implement it depends on hydrogen.”

Everything else is set and ready to fly.

To learn more about the technology, visit LinkedIn: http://www.linkedin.com/pub/moti-herskowitz/45/39b/560