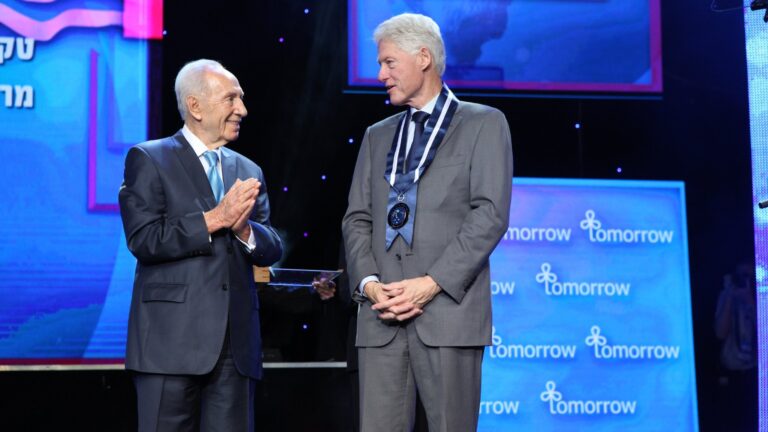 The Fifth annual Israeli Presidential Conference is underway in Jerusalem and the focus has turned back to leading the world to a better tomorrow, following last night’s over-the-top 90th birthday celebrations for Israeli President Shimon Peres that also marked the opening of the convention.

Clinton was chosen as a recipient because he is “one of the greatest friends known to Israel and the Jewish people,” the prize committee said. 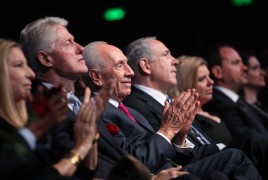 A-list front row at the opening of the Presidential Conference in Jerusalem. (Photo: Presidential Conference)
“When I call you my friend I know that I speak for the entire people of Israel,” Peres said. ”Your unwavering commitment to the Jewish people and your moving support for the State of Israel will always be cherished by each and every one of us.”

Last night it was Clinton who praised Peres in a birthday tribute speech. The former US president called Peres “the world’s social Einstein.”

“You have tried to put together a unified theory of meaning to unite politics and philosophy and psychology and history and science and technology,” Clinton said at the gala birthday event. “Every one of us who has been blessed enough to know you… has been made a little bigger, a little stronger, and a little more optimistic that one day your theory will be real.

“On your 90th birthday, what we really celebrate is your great gift to all of us. God bless you.” 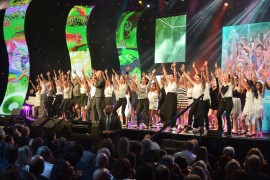 Dancers at the international convention center last night. (Photo: Presidential Conference)
Blair got things rolling by wishing Peres a happy birthday. He told the crowd: “We have our queen, and you have your Shimon.”

The celebration included a slightly obnoxious comedy routine by one of Israel’s top comediennes Adi Ashkenazi, two songs by Streisand – her first-ever rendition of the Hebrew prayer, Avinu Malkeynu, which Peres specifically requested, and People, as well as songs by Israeli singers Eyal Golan and Shlomo Artzi.

Referring to Streisand, Peres said it was “worth waiting 90 years to hear such a heavenly voice.”

There were also video tributes to the world’s oldest head of state from US President Barack Obama, singer Bono and Russian President Vladimir Putin.

UNCOVER ISRAEL - Get the ISRAEL21c
Weekly Edition free by email
Sign Up Now!
Bring Israel's story to life.
Millions of people around the world rely on us to gain a deeper understanding of Israel. We are the trusted source for original content you won't find anywhere else.
You can make a difference. Donate today to support journalism that brings Israel’s story alive.
SUPPORT ISRAEL21c
Read more on:   News, Jerusalem, Shimon Peres, Barbra Streisand, Bill Clinton, Presidential Conference