The well-known problem in cancer radiation therapy is that it indiscriminately zaps both malignant and healthy tissues. But what if it were possible to shield normal cells from the powerful rays?

BioProtect, one of a cluster of notable Israeli biotech innovators, has come up with a unique solution that accomplishes this task for prostate cancer sufferers. Its ProSpace biodegradable balloon keeps radiation from healthy tissues surrounding the tumor.

This type of cancer was a logical place to start because of the prostate’s proximity to the rectum. Radiation therapy for the cancer can inadvertently cause soreness, diarrhea, perforation, and severe bleeding or bloody discharge.

Made from biodegradable polymers, the balloon is implanted in a simple, minimally invasive procedure and dissolves within three to six months.

Nearly 50 percent of cancer patients in the United States are treated using radiation therapy, and ProSpace may have a role in offering many of them a safer and more enhanced radiation therapy experience.

According to the American Cancer Society, approximately 12 million new cases of cancer are diagnosed globally each year, and the incidence of cancer is expected to rise in the coming years.

BioProtect is aiming its breakthrough technology at the European market first. In October 2010, the device received the CE Mark, which certifies that a product conforms with European regulatory requirements. The company is now establishing its marketing network throughout the continent.

“We already have initial sales in Europe. We started in Italy in April, and have since signed distribution agreements in five European countries. Right now, we’re working to validate the product’s position in the market and are negotiating to expand further in Europe.”

In Israel, the Health Ministry approved the ProSpace for marketing last July.

The company has already carried out a pilot study for the US Food & Drug Administration, and is now in the process of finalizing the clinical requirements to obtain clearance to sell ProSpace in the US. 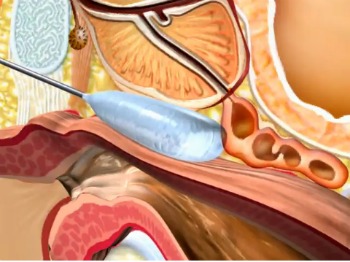 The balloon is inflated to protect the healthy cells.

“Right now, we’re working on more significant fundraising to take us to the next stage,” says Shiner. “We’re a small company, based in Kfar Saba, with a highly dedicated R&D team. Manufacturing is on site.”

In March this year, Padova Hospital urologist Fabrizio Dal Moro reported to the European Association of Urology’s 26th Annual Congress that inserting ProSpace between the prostate and rectum has been shown to reduce the volume of rectum exposed to radiation by 69.9%, which he called “a dramatic reduction.”

In January next year, the company is to launch a further study utilizing ProSpace for an innovative radiation therapy protocol at several Israeli medical centers.

Shiner says that the feedback from the field has been extremely encouraging.

“Physicians tell us that they prefer our product to the only alternative available — a gel that is injected and performs a similar role. The great advantage of the ProSpace device is that it’s reproducible. Its well-defined boundaries under a CT scan, and reproducible shape and size, help the doctor to effectively administer their treatment.”

What’s more, patients report little or no pain from the implanted balloon, although they occasionally experience mild and temporary discomfort at the access area.

UNCOVER ISRAEL - Get the ISRAEL21c
Weekly Edition free by email
Sign Up Now!
Bring Israel's story to life.
Millions of people around the world rely on us to gain a deeper understanding of Israel. We are the trusted source for original content you won't find anywhere else.
You can make a difference. Donate today to support journalism that brings Israel’s story alive.
SUPPORT ISRAEL21c
Read more on:   Health, Medical devices, radiation, cancer treatment