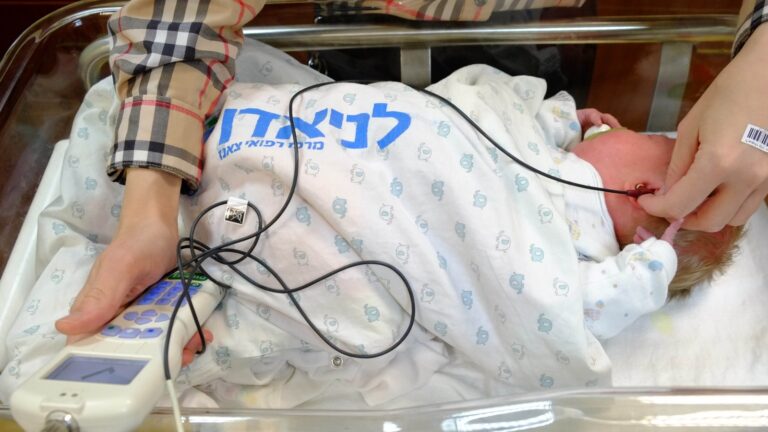 A newborn receives a hearing test at Laniado Hospital in Israel. Photo by Chen Leopold/FLASH90

The genetic source of inherited hearing loss is better understood following a new multinational study led by Zippora Brownstein and Prof. Karen Avraham from the Sackler Faculty of Medicine at Tel Aviv University.

More than 150 genes are known to science to be involved in hearing loss. Until now, mutations in only seven of those genes had been detected among people with hearing loss in the Jewish population of Israel.

In their study of 88 Israeli families with hearing loss — from congenital to older-age onset, and from moderate to profound — the researchers identified mutations in 25 additional genes using a custom gene panel they created.

Although 24 of the 25 genes are known to cause hearing loss in families worldwide, most of the specific mutations in Israeli Jewish families were never observed before. The 25th gene, ATOH1, was found for the first time to have a mutation that causes hearing loss in humans.

She believes more such families will be identified in Israel and abroad.

“The goal is that with this information, new treatment possibilities for people with hearing loss will be developed, including gene therapy,” Avraham said. “For many families, treatment and rehabilitation for hearing loss can be tailored to the family’s specific mutation.”