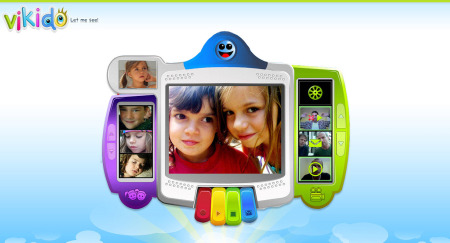 Vikido’s video messaging service is designed for kids aged between three to nine.

Call it a business match made in heaven: Amit Knaani, single mother and high-tech executive, meets Emanuel “Yami” Glick, single father and high-tech executive. Concerned about their little ones’ limited technological ability to stay in touch – and well aware of Internet dangers – the two combine talents to find a solution to the problem. The result is Vikido, a no-reading-required video messaging service for kids aged three to nine.

Working out of the upper level of Glick’s Tel Aviv duplex, the pair hustled for a year to attract funding and write code, while chronicling their startup’s trials and tribulations in a weekly column, The Transparent Startup, hosted by Israel’s largest news website, Ynet.

The result is Vikido, a video messaging service for kids ages three to nine. Just launched in Israel, Vikido’s English-language parents’ site is expected to debut by March, and additional language interfaces are forthcoming. “We designed the interface to resemble a Fisher-Price toy, with pictures and big buttons, so that children who cannot read or write can use it without any difficulty,” said Glick. “They just apply what they already know.”

Children using Vikido may send video messages to, and receive messages from, addresses that have been approved by their parents. In addition, parents can opt to monitor every incoming and outgoing message.

It started out very personal

Though Vikido is backed up by market research and professional know-how, Knaani and Glick tell ISRAEL21c that it rests firmly on a personal foundation as well.

“I have a seven-year-old son in South Africa, so I have experienced first-hand all the difficulties of communicating,” says Glick. “This is a way for me to say, ‘Hi, I love you, I’m thinking of you,’ anytime.”

Glick previously used Skype to connect with his son and to add his three-year-old daughter in Israel to the circle of communication. But Skype and instant messaging require an immediate presence at the other end, and young children can’t operate them alone. Plus, says Glick, “There’s no real security on these programs because they’re designed for adults.”

Knaani and Glick realized that a kid-friendly messaging service could benefit millions of children residing far from extended family, and provide a better alternative to unproductive phone calls even with close-by parents or grandparents. Knaani’s mother in northern Israel uses it every day to keep in touch with her seven- and five-year-old granddaughters in Tel Aviv.

Kids as inspiration to take a risk

Knaani, 31, and Glick, 40, first crossed paths at an industry event in Tel Aviv three years ago. They discovered that they’d grown up in the same northern town of Tivon, and took a road trip to visit their parents – who all turned out to have known each other already.

During the ride, recalls Knaani, “We started talking about what interests us on the web. We discovered we were both inspired by our kids.”

A former photo editor at Ynet, Knaani later managed the biggest medical website in Israel and became senior product manager at Israeli startup Wix.com. She saw how parents worry that their kids are online too much, while simultaneously spending up to 15 percent of their own Internet time in parenting forums and on photo-sharing sites.

“After we left our jobs, we had all our working hours to dedicate to Vikido,” says Knaani. “But doing a startup is much more than nine-to-five. It’s like a third child for both of us.”

Because neither has children living at home full-time, they can devote several long days each week to their venture. “It would have been terribly difficult to have a fully functional family life and a startup,” says Glick. “This way, we spend our time with the kids and when they’re not with us we can concentrate fully on our business.”

Using about $200,000 in financing from private investors, Knaani and Glick worked to perfect their product with the help of their pint-size experts. Further investment will enable them to take the product to the next level, integrating technological features such as seamless integration with cellular devices.

By spring, the duo hopes to launch the English version of Vikido, using the parental blogosphere to attract potential customers. “Europe is more advanced in terms of satellite usage,” says Glick, “so while we’re aiming at the American market as well, we are paying closer attention to the UK market.”

Between now and then, they are working to make sure the system is bug-free and as user-friendly as possible. “Our kids gave suggestions like ‘Why is this button here? It should be there,’ so we owe them a lot in terms of how Vikido turned out,” says Knaani. “They are the first users and they’re very excited about it.”

For Email Marketing you can trust
UNCOVER ISRAEL - Get the ISRAEL21c
Weekly Edition free by email
Sign Up Now!
Bring Israel's story to life.
Millions of people around the world rely on us to gain a deeper understanding of Israel. We are the trusted source for original content you won't find anywhere else.
You can make a difference. Donate today to support journalism that brings Israel’s story alive.
SUPPORT ISRAEL21c
Read more on:   People