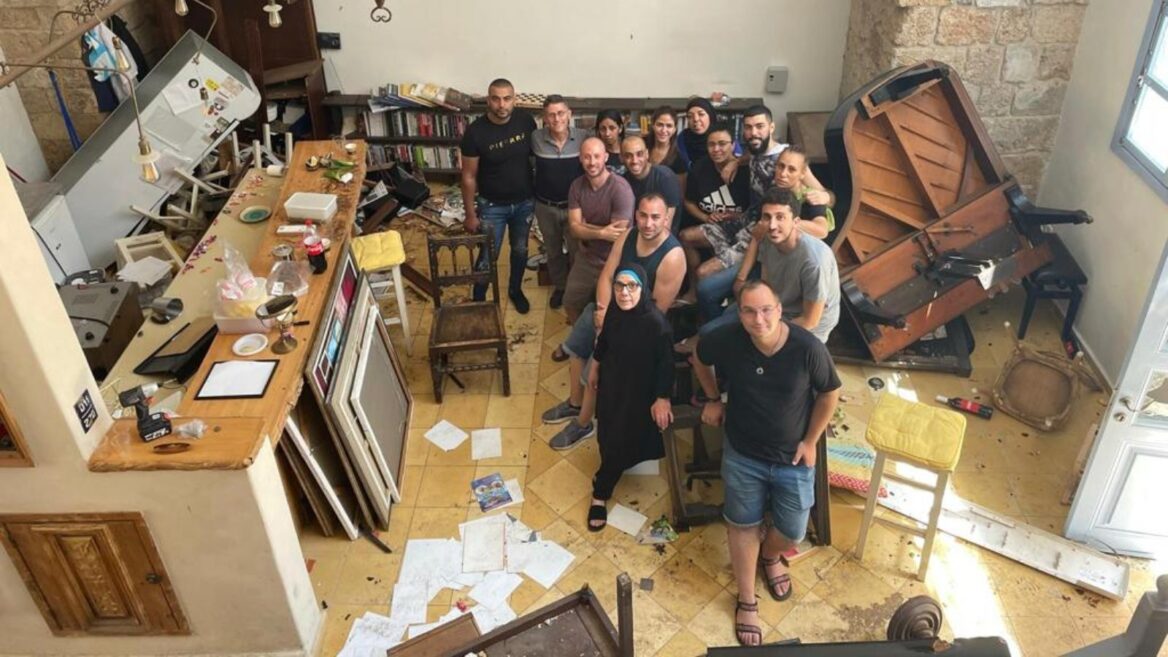 Shocking, appalling – there’s no other way to describe the destruction of Evan Fallenberg’s Arabesque Arts and Residency Center in the Old City of Acre (Akko).

The Ottoman-era building that Fallenberg and his son, Micha, spent three years restoring as a beautiful retreat and boutique hotel was smashed and ransacked during a recent spate of riots in mixed Arab-Jewish cities.

Fallenberg has no doubt that Arabesque was targeted, like other Akko businesses such as the Uri Buri restaurant and Efendi Hotel, because it is owned by Jews.

But he harbors no resentment and has no desire to react in any way other than to rebuild the eight-year-old Arabesque.

“I don’t have an ounce of anger in me about this, no frustration or bitterness,” Fallenberg tells ISRAEL21c. “Not because I suppressed it but because it’s not what I have felt from the very first moment.” 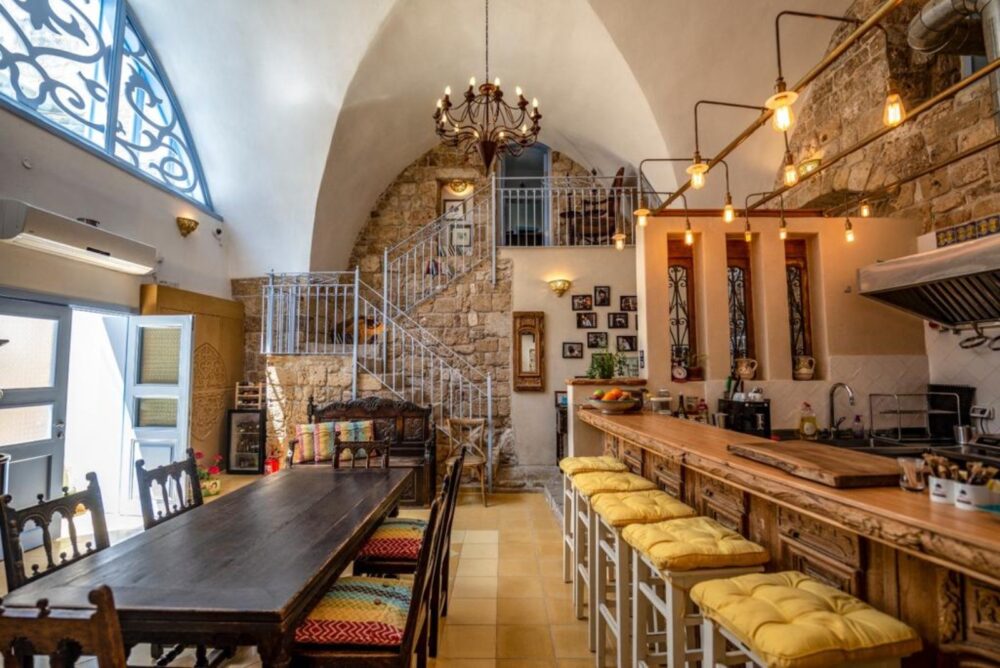 A view inside Arabesque before the destruction. Photo by Daniel Hanoch

’45 minutes to destroy the whole place’ Arabesque in Akko the morning after the riots. Photo courtesy of Evan Fallenberg

The attack began shortly after midnight as May 12 slid into May 13. Already on Tuesday, May 11, rioters intending to harm Arabesque were chased away by the Arab next-door neighbor who is like family to the Fallenbergs.

“Our place was spared three or four times on Tuesday night because my neighbor and his son sat outside till 4 in the morning,” Fallenberg says.

The hotel was full that day. The police told Micha Fallenberg, the center’s manager, to make sure the guests stayed in their rooms. At 7:00 Wednesday morning, he and two Arabesque employees made breakfast for the guests, and later everyone checked out safely.

Fortunately, the hotel was empty when all hell broke loose later that night. The police would not enter the Old City, and the next-door friend was no match for the emboldened mob of about 50 youths, who threatened to torch the whole neighborhood. 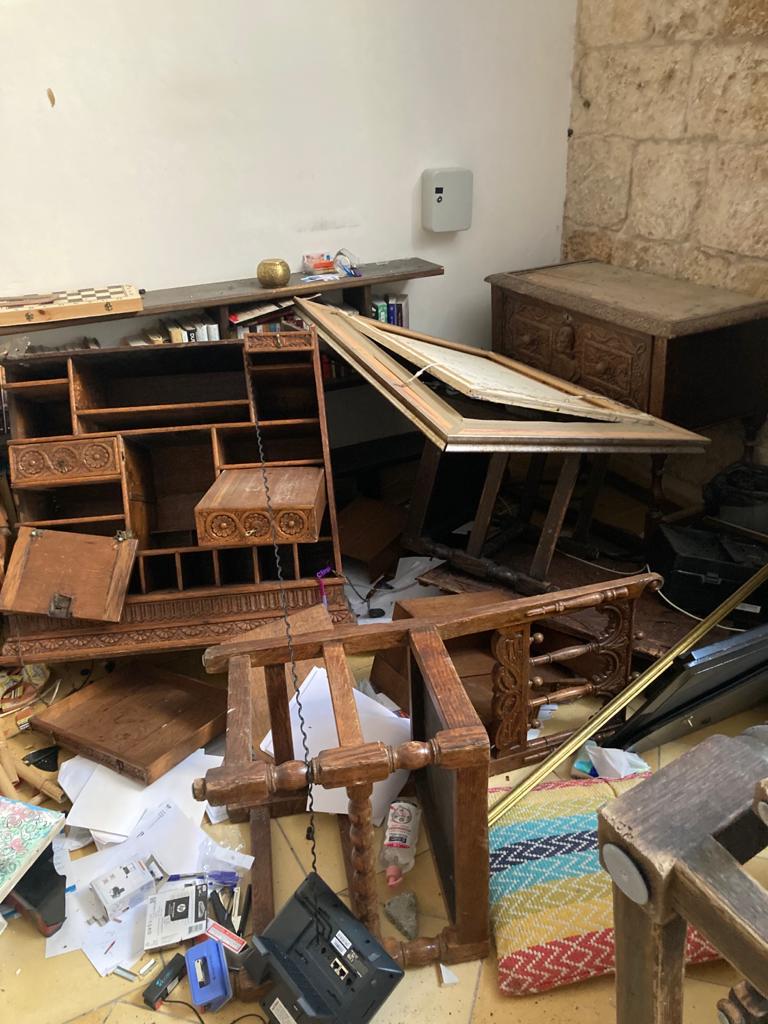 The Arabesque Arts and Residency Center in Akko ransacked by rioters. Photo courtesy of Evan Fallenberg

“Micha was at home, five minutes away, watching the security camera footage until they destroyed the camera. It took them about 15 minutes to break down the massive front door and 45 minutes to destroy the whole place,” says Fallenberg, who was asleep in his studio just outside the Old City when the attack happened.

The unidentified assailants, he says, “are young men with raging hormones, people who are not the best students or don’t have great jobs, with not much to lose. Some may have been from outside Akko but whoever was directing them knew exactly which places to hit.”

However, he didn’t feel personally attacked.

“I felt a deep sadness that people could be driven to this level of anger and violence. I think it comes from two places. One is the way Israeli society has treated the Arab population not like full and welcome citizens. The other is that there are issues festering within Arab society that are not being admitted or dealt with properly. I feel we are all guilty for letting this thing happen and we all have a role to play in making things better.”

A decision to stay and rebuild

After Arabesque was ruined, Fallenberg spent three days in mourning. Perhaps he’d been wrong about Akko, a city in which Arab Muslims and Christians comprise more than a third of the 50,000 residents.

“Was what I thought was genuine love and respect not real? Who did I think I was, coming into such a foreign place?” he wondered. 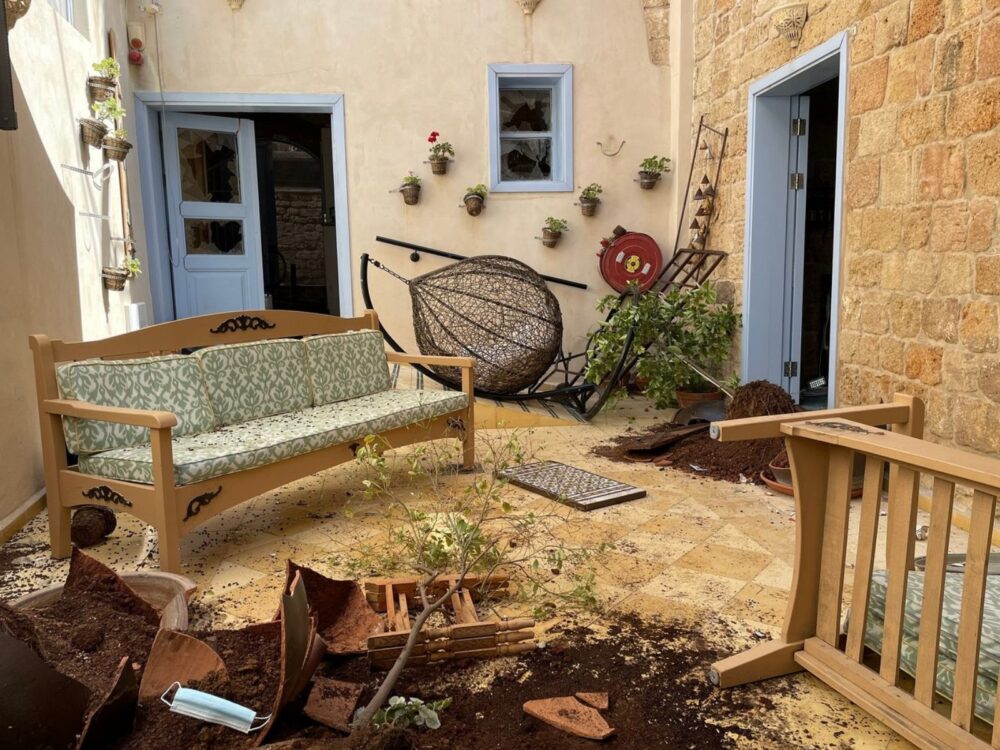 View of the damage at Arabesque in Akko. Photo courtesy of Evan Fallenberg

“But what I heard from neighbors over the succeeding days proved to me again and again that I am so much a part of things here,” he relates.

“That’s when I made my decision, and my son made his decision separately, to stay and rebuild and continue to be part of this place that we’ve both fallen in love with.”

The Fallenbergs launched a crowdfunding campaign to raise 300,000 shekels (close to $100,000) to start rebuilding. Although the government will offer compensation because it was considered an act of terrorism, he doesn’t know when or how much.

Within days, nearly 500 donors had contributed more than half the hoped-for amount. 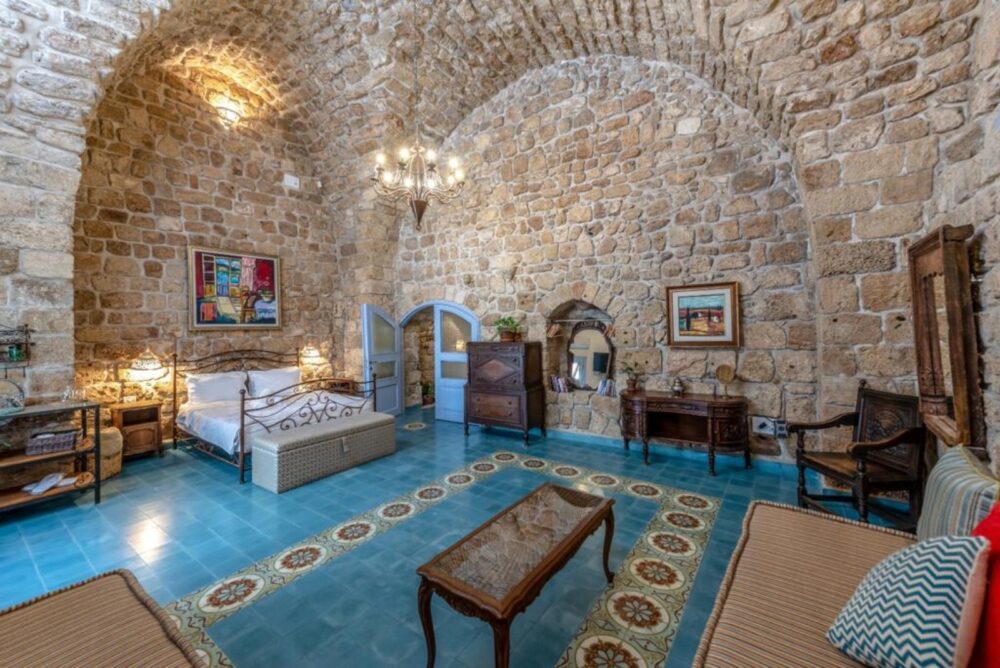 A room at the Arabesque before it was destroyed. Photo by Daniel Hanoch

Positive change in the air

Fallenberg, an American-born writer, translator and professor of English literature at Bar-Ilan University, feels that this pivotal moment in Israel’s story, and his own, may bring change.

“There were times during the pandemic that I sank very low, and it hit me the other day that I have not felt any of that low since this happened to me in Akko,” he tells ISRAEL21c.

“During the pandemic I was sequestered from the people I love and all those little daily interactions that I thrive on. When this happened, it was quite the opposite — the connection between human beings has been overwhelming,” he says.

“My Facebook post [on May 14] got so much traction. Many conversations have come out of this with my Arab friends and neighbors. I’ve gotten reactions from around the world to our crowdfunding campaign. I’ve heard from people wanting to come and help us clean up. It’s extraordinary and it’s buoying my spirits.”

Fallenberg senses “a merging, an emerging, a gathering of people who believe that we can share our lives more equitably.”

Visitors will come back

He is eager not only to restore Arabesque but to expand its offerings including programming for locals. And he believes Jewish visitors will come back.

Fallenberg explains that in 2008, the last time there was racially motivated violence in Akko, it took a year and a half for the merchants in the outdoor shuk to recover their business. He doesn’t think that will happen now. 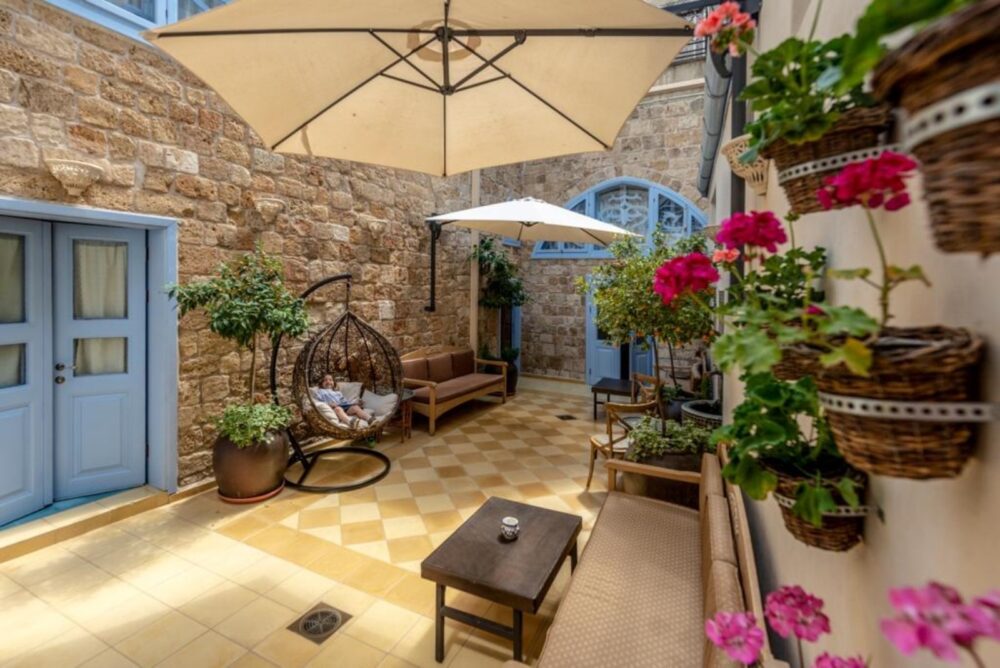 The Arabesque in better days. Photo by Daniel Hanoch

“In 2008, there was almost nowhere to sleep in Akko. It was a place many people were afraid of. In the last year or two, especially with corona when they couldn’t go abroad anymore, Israeli Jews discovered Akko and loved it because the atmosphere is unique here. Everyone is so friendly and welcoming,” says Fallenberg.

“I believe people will remember that there was something very positive here that they felt, and they will come back. We’ve already had people writing to us to say, ‘I want to be among your very first guests.’” 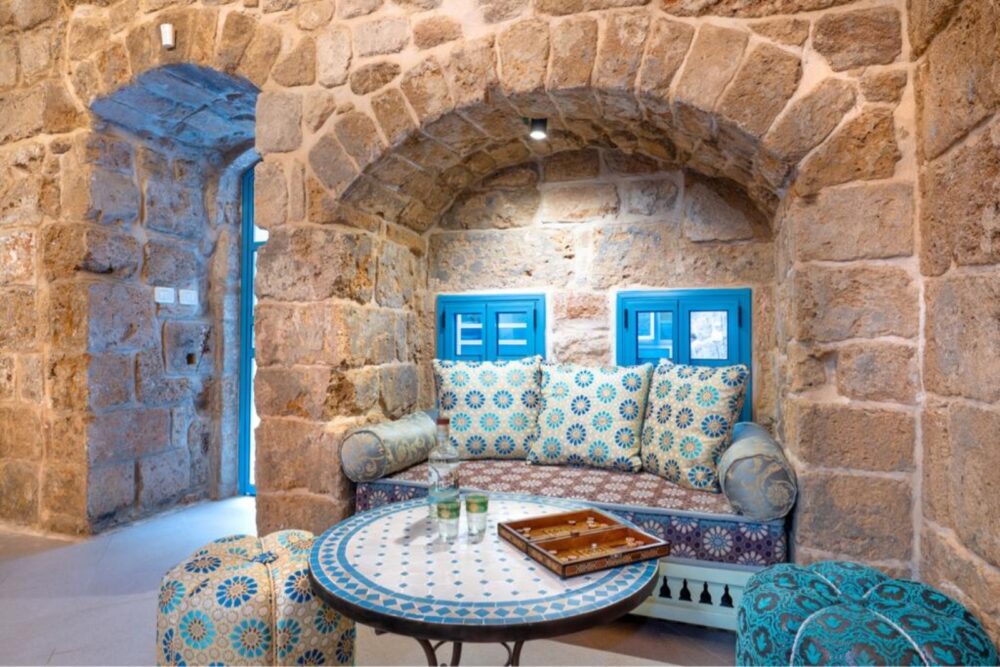 The Arabesque Arts and Residency Center will be rebuilt. Photo by Daniel Hanoch
UNCOVER ISRAEL - Get the ISRAEL21c
Weekly Edition free by email
Sign Up Now!
Give
Every
Month
Help ISRAEL21c uncover
the Israel we love