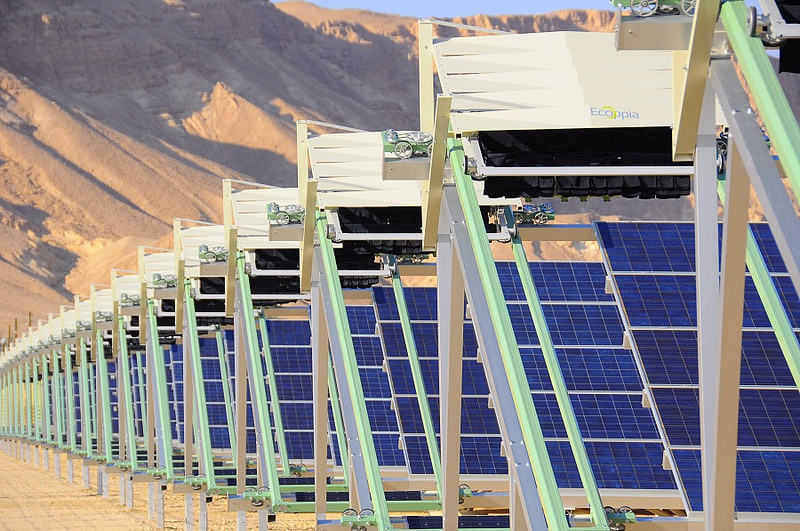 The robots clean dust off 18,200 panels at Ketura Sun every evening.

One of the greatest things about hot, desert locations like Israel is that you get sunshine 300 days of the year. This is the perfect condition for solar energy power plants, but with one drawback –– all the dust.

Dust storms spit particles onto the photovoltaic panels, causing efficiency to plunge over time. Up to 40 percent of the energy can be lost from dirt. Less efficient panels means less energy back to the grid and less money in the pocket of stakeholders and investors.

But Israel has a solution that can replace backbreaking grunge work.

Last year, a group of inventors who made their money in biotech enterprises took their expertise into a new venture: solar-panel cleaning robots. Their company, called Ecoppia has been operating since last March on an Israeli kibbutz, cleaning the 18,200 panels at the Ketura Sun solar power plant— a 4.95-megawatt solar power plant near the southernmost tip of Israel.

This is the lower limit of the size of solar plants that Ecoppia robots can clean daily, says CEO Eran Meller.

Moving the dust without water

“We’ve removed 99 percent of the dust on a daily basis,” says Meller. “Within a two-week period we increased efficiency rates [of Ketura Sun] by a significant figure.”

Instead of sending in human cleaners with buckets and squeegees every six or eight weeks, plant managers can deploy the panel-cleaning robots fitted with solar power packs that sustain a charge for three days.

Working for an hour every evening, they brush the air above the panels with a gentle swishing movement –– not touching the panels, but causing enough action so the dust is suspended and rolls off without danger of breakage as there is with human cleaners. The machines are self-cleaning and – especially important in an arid climate – no water is required.

“Our [method] is still much more effective than manual cleaning,” says Meller. “There are a few other competitive advantages. We are the only solution which is water-free. We use a unique gravitation method, which generates air flow to take out dust.

“Our unique microfiber elements catch microns of dust and are gentle on the panel. We make green energy even greener.”

When the sun comes up, the robots “rest” under a shaded canopy so the sun and the panels can do their job making energy. 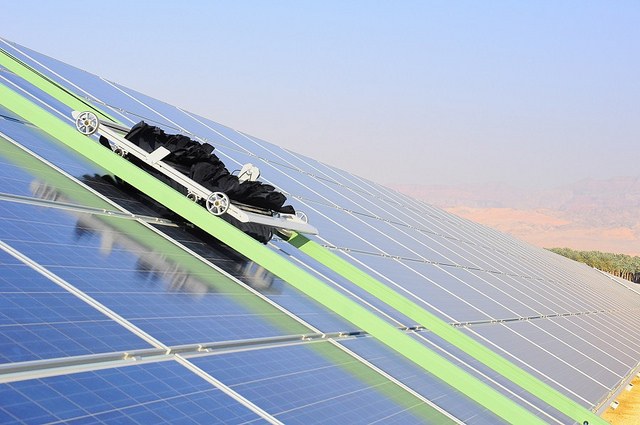 An Ecoppia robot at work

Normally the robots start the cycle of cleaning automatically, but an operator can intervene if there is a need.

Interested in buying a team of robots? Return on investment takes about 2.5 years, Meller estimates. Not bad considering the life of a solar power plant is at least 20 years and up.

The business model is an upfront purchase of the robots with an annual maintenance fee.

There are other solutions on the market. The Swiss company Serbot has a water-based system run by a human operator. The Israeli-built Ivanpah Solar Electric Generating System in California relies on BrightSource robots to clean its panels. And the solar power company SunPower bought Greenbotics to clean its panels.

Meller says that Ecoppia is the only system that is waterless, and it has several patents pending. “We have a very extensive IP portfolio and files for five patents worldwide,” he says.

Barriers for other companies to enter the market include method, design and hybrid technology, he says.

Also the arduous process of getting certifications from the panel producers and the projects is no easy task, he notes.

By July, Ecoppia “will close five additional major solar parks,” he tells ISRAEl21c. “By the year end we will be the only one who will be able to clean five million panels per month. This will be the only technology that enables solar park owners to conduct daily cleaning.”

There is a growing trend for robots doing our dirty work in the renewable energy business, where solar fields can practically run all by themselves. This isn’t true in the polluting industries of coal, natural gas, oil and nuclear energy –– all of which require large staffs to run operations.

Hats off to the robots.

UNCOVER ISRAEL - Get the ISRAEL21c
Weekly Edition free by email
Sign Up Now!
Bring Israel's story to life.
Millions of people around the world rely on us to gain a deeper understanding of Israel. We are the trusted source for original content you won't find anywhere else.
You can make a difference. Donate today to support journalism that brings Israel’s story alive.
SUPPORT ISRAEL21c
Read more on:   Energy, Environment, solar system, ecoppia, Solar energy