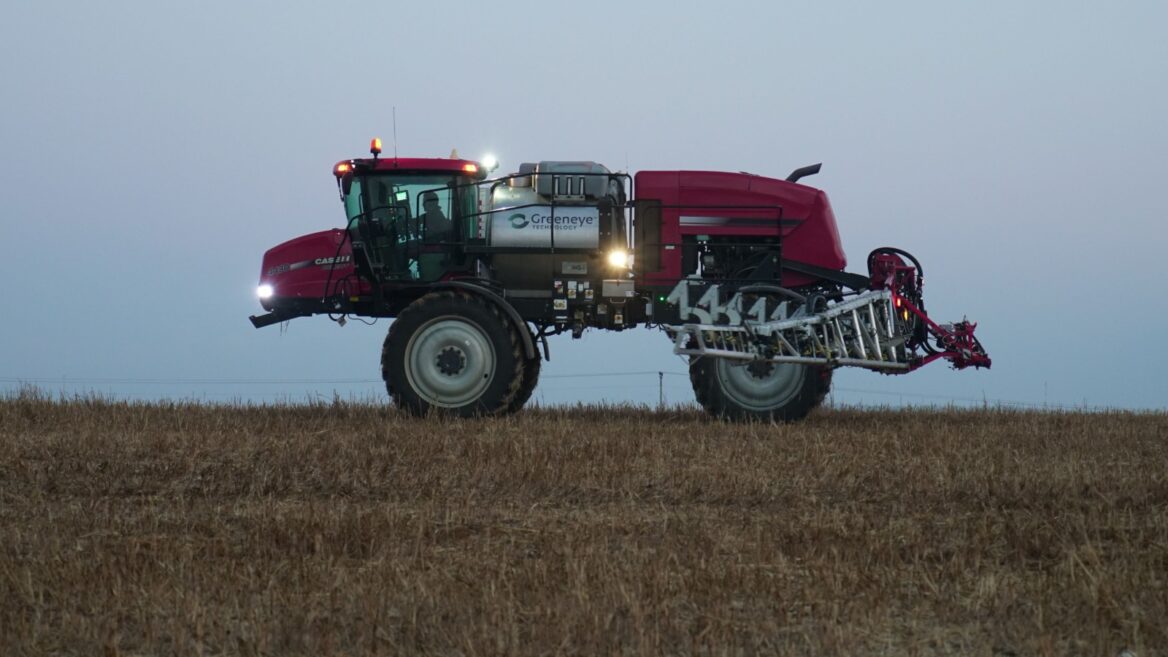 Spraying herbicides on weeds has long been an imprecise science. Farmers have had little choice in the past but to spray everything – healthy crops and weeds alike. It’s an incredibly wasteful process.

“Farmers go to their fields with their machines and spray the entire field uniformly, 100 percent of the time, season after season, field after field, even though the weed infestation might be only 10% of the field,” explains Nadav Bocher, CEO of Greeneye Technologies.

This Israeli ag-tech startup has come up with a new approach to weed control.

“We want to change this from a wasteful practice to one of precision spraying, where you spray only where needed.”

But how do you differentiate between the weeds you want to eradicate and the crops you don’t want to douse with unnecessary chemicals? And how do you do that in real time?

Cameras installed on the “boom” – that’s the 36-meter-long arm affixed on the sprayer that dispenses the herbicide — capture data from the entire field.

Where are the weeds (Greeneye’s algorithms recognize and classify more than 200 types)? Are the crops healthy? Are there any diseases in the field? Are the crops receiving the micronutrients they need? Are the correct fertilizers being used? 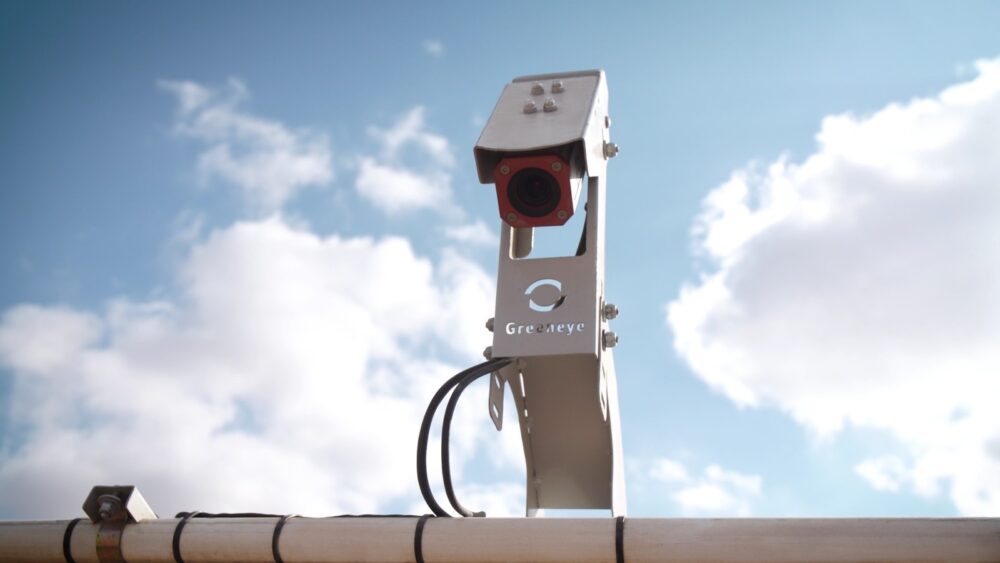 Greeneye images the field using cameras on the boom of any sprayer. Photo courtesy of Greeneye

Greeneye’s cameras snap away at 40 frames per second, allowing the spraying vehicle to travel at its normal maximum speed (around 20 kilometers per hour).

“Farmers need assurance that 95% of weeds will be captured and sprayed,” he notes. “If we miss a weed, if the camera didn’t detect it or the nozzle didn’t spray, the price farmers will have to pay will be too high.”

The company has amassed a database of millions of images from many different fields, crops and growing regions. Greeneye’s AI compares what it sees with what it’s already learned about specific crops.

Greeneye hopes to produce precise “weed maps” that will help farmers pick the right crop-protection products and use less of them.

Greeneye’s smart sprayers make sure that only the weeds are given a dose of herbicide. That’s good for the health of the plants (and the humans who consume them), good for reducing water and soil contamination from pesticide run-off, good for preventing herbicide-resistant crop evolution and, most of all, it’s good for the farmer’s bottom line.

If a farmer can spray up to 90% less herbicide (the average is 78.4%, Bocher tells ISRAEL21c), the farmer can save big time, especially for soy and corn where profit margins are extremely thin. Bocher estimates farmers can reduce their costs by more than 50%.

For farmers, this represents a game changer. Globally, farmers spend some $30 billion a year on herbicides. However, weeds remain a perennial problem. In the US alone, they are estimated to cost farmers $33 billion a year in lost crop production.

And, because of Covid-19 and challenges to the supply chain, the price of herbicides has skyrocketed. Glyphosate, a commonly used herbicide, jumped 300% – if you can even find it.

Distinguishing weeds from crops is known as “green on green” spraying. Current equipment cannot do that, so farmers tend to spray before any crops have been planted to catch weeds early on.

Greeneye aims to change the equation and enable spraying several times in a season, Bocher says.

Greeneye’s “dual spraying” function allows farmers to dispense herbicides along with other chemicals, such as fertilizer, fungicides and micronutrients. The technology works with any brand of spraying vehicle.

Greeneye has raised $29 million since its founding in 2017 (including $22 million at the end of 2021). Leading herbicide maker Syngenta led the first round with Jerusalem Venture Partners and has participated in subsequent rounds, which have also included AGCO, a leading maker of spraying vehicles.

Why would an herbicide maker like Syngenta choose to back a company that would mean they’ll sell less of their main product?

Farmers are facing an increasingly tough regulatory landscape, Bocher notes. The European Union, for example, has a target to cut pesticide use in half by 2030.

While the US and Canada have yet to implement similar goals, the expectation is that they will, and that farmers will need to be prepared.

“The chemical manufacturing industry is going through huge disruption. They understand they don’t have any other choice and they are going to have to reinvent themselves,” Bocher says.

On January 25, Greeneye announced a partnership with Farmer’s Business Network, the largest online retailer selling products direct to family farms. Greeneye’s precision spraying system will be tested in FBN’s 2022 On-Farm Field Trials Program in the US Midwest across a range of geographies and field conditions.

Bocher will soon be relocating to the Midwest, where Greeneye launched an “early adopter” program with dozens of customers in Nebraska, Iowa and Illinois who will start using the Greeneye system in the coming months.

“Our early adopter program was oversubscribed in less than a week,” Bocher says. Greeneye plans to expand across North America in 2023.

Greeneye is currently focusing on the two of the largest crops in the world, soybeans and corn (with 175 million acres planted in the US), although Bocher says the company will in the future expand to other plants, such as cotton and wheat. 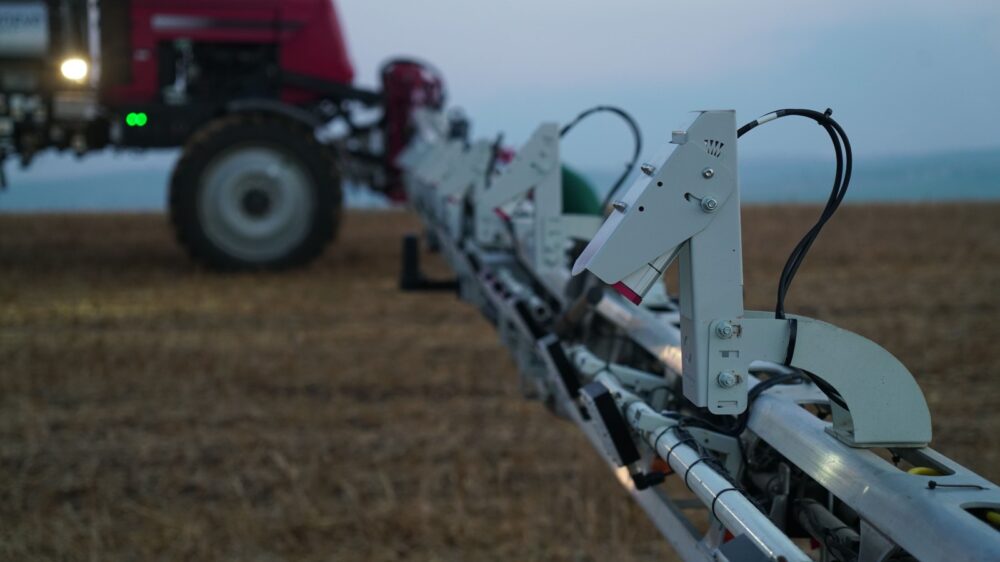 The Greeneye software and hardware suite is appropriate mainly for larger, Westernized farms. On smaller or specialty farms, herbicide is delivered manually rather than by vehicle. Some of these farms can use approaches such as mechanical weeding, lasers or electricity.

“It will be a few years before we can introduce our technology to India and countries like that,” Bocher says.

Prices are not yet available, but Bocher expects Greeneye to be cheaper than competitive systems from companies such as Weed-it, Ecrobotix and Bilberry. Customers will have the option to purchase the system outright or subscribe and pay a flat fee per acre.

Bocher says that farms can see a return on their investment in six to 18 months. “The larger the farm, the faster the ROI because the impact is bigger,” Bocher says. That’s a huge improvement over standard farm machinery, where the ROI benchmark is closer to five years. 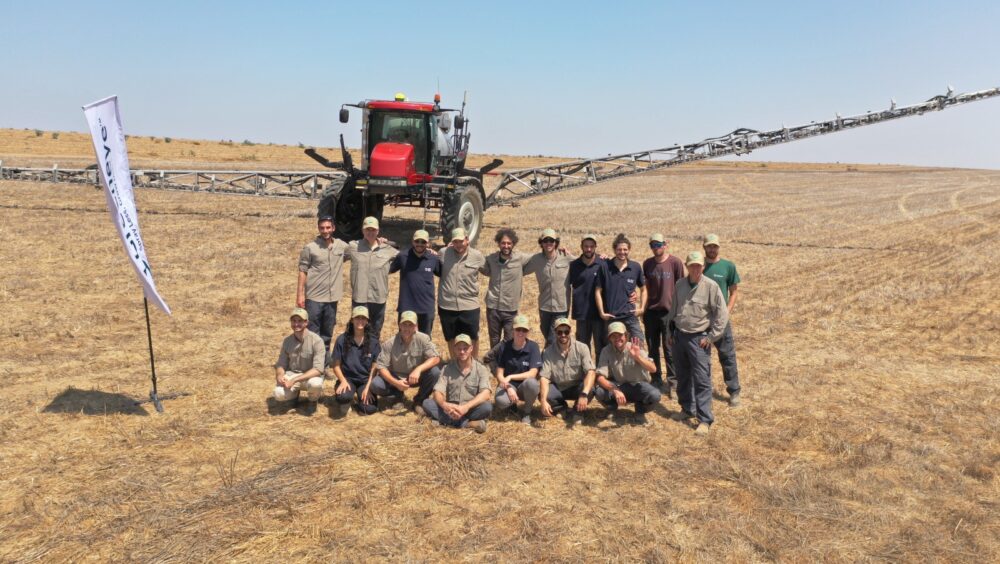 Greeneye’s team. CEO Nadav Bocher is in the back row, fifth from right. Photo courtesy of Greeneye

Greeneye employs 25 people in three offices. R&D is in Tel Aviv and Bethlehem HaGlilit, where the machinery is tested. Sales and operations are run out of the US Midwest, where Bocher soon will be relocating.

Can Greeneye help with climate change? Yes, says Bocher. When a farmer tills the ground to control weeds and provide better conditions for the crops, “a lot of carbon escapes. It’s a massive carbon emission path. We help farmers reduce their dependance on tillage.”

Herbicides “are not our enemy,” Bocher stresses. “They’ve enabled us to feed the planet. We just need to be more efficient in how we do it, to not spray where we don’t need to.”

For more information on how to cut your use of herbicides, click here

UNCOVER ISRAEL - Get the ISRAEL21c
Weekly Edition free by email
Sign Up Now!
Bring Israel's story to life.
Millions of people around the world rely on us to gain a deeper understanding of Israel. We are the trusted source for original content you won't find anywhere else.
You can make a difference. Donate today to support journalism that brings Israel’s story alive.
SUPPORT ISRAEL21c
Read more on:   Environment, Technology, ag-tech, Sustainable Farming, Climate Change, Greeneye