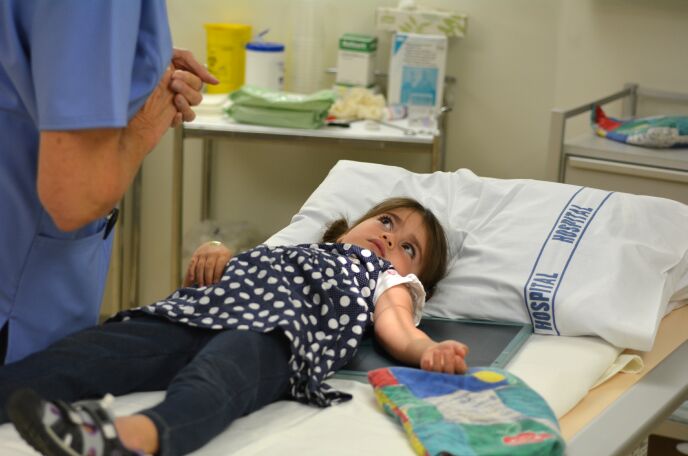 Even children will be able to tolerate radiation therapy with MercyBeam. Image via Shutterstock.com (shutterstock radiation)

Even children will be able to tolerate radiation therapy with MercyBeam. Image via Shutterstock.com

An Israeli industrial engineer who spent months in the hospital following a paragliding accident saw the limitations of X-ray technology and vowed to make it better.

After developing a real-time X-ray detector and an X-ray explosive identification system, he and his team of physicists invented MercyBeam, a patented lens to improve radiation therapy for patients of all ages.

Cofounder and CEO Ze’ev Harel tells ISRAEL21c that his four-year-old company, Convergent RNR, is collaborating with medical physicists and oncologists at top hospitals including Sheba Medical Center in Israel and MD Anderson in Texas, and is in preliminary discussions with others including Massachusetts General, Cincinnati Children’s Hospital and Auckland Hospital in New Zealand.

“They all like our approach,” he says. “When we presented our technology to Hadassah and Sheba medical centers and asked for their feedback, the bottom line of those meetings was, ‘When can you install first system at our hospital?’ It was very encouraging; there was not even one criticism.”

Current radiation therapy treatments are quite problematic. They use very high-energy radiation and hit not only the tumor but also the healthy surrounding tissue. They require large and expensive machinery in specially shielded treatment rooms, so they are not an option for clinics and hospitals that cannot afford these measures. In addition, current radiation therapy isn’t appropriate for children under three.

The lens collects most of the three-dimensional X-rays coming out of any standard X-ray generator and converges them toward the tumor. This increases the therapeutic dose where it’s needed, while surrounding tissue gets little or no exposure. The converging technology enables the use of photon-energy X-rays 100 times lower than those used by current systems based on linear accelerators (LINACs).

MercyBeam is small, light and relatively inexpensive – the system will cost an estimated $700,000 to $1 million as opposed to $4 million or more for a LINAC and $80 million for a proton-beam system. MercyBeam would not need to be enclosed in a “vault” and could even be assembled in mobile treatment vans for remote or deprived areas.

“It’s the first time it will be possible to concentrate an X-ray beam,” he says. “This is important for treating children. Currently, the parent cannot stay in the treatment room and so the child is alone and may have to be sedated. With MercyBeam, an adult could stay by their side with very light shielding, because of the low and concentrated energy.”

Alezra says the MercyBeam technique will work best on a small target, such as the skull or spine, because of the low volume. “In those cases, a small volume is perfect.”

Now the issue is raising enough money to build a prototype. “The Office of the Chief Scientist granted us $700,000 for which we need to get matching funds,” says Harel.

In addition to conventional fundraising, CRnR came up with a twist on crowd-funding called “Contribute-Match-Donate.” The company will match every contribution, and once the MercyBeam systems are in serial production, will donate units to hospitals and clinics all over the world in the name of the donors. Online contributions can be made in someone’s honor or memory to be published on the CRnR website and social media.

“It was not easy to find the perfect raw metal materials for the MercyBeam lens. We checked all over the world and found good enough quality only in Germany,” says Harel.

“You have to grow the metal crystals and cut them in a very precise way, and then polish them. Our lenses are built from several rings, each of a different metal so that all the beams will converge into the correct volume of treatment. If we can grow the crystals ourselves that would reduce the price of the lens itself by approximately 70 percent.”

He says the only lenses he’s aware of that are similar to MercyBeam are used by the US space agency NASA to check for X-ray radiation in space, “and it costs millions and millions to do one set of lenses.”

Convergent RNR is headquartered in Tirat Carmel, close to the “knowledge base” in the Haifa area due to the presence of R&D facilities for global X-ray technology firms such as Philips and GE.

Years ago, Harel led the development of novel software and hardware used worldwide for proofreading Torah scrolls. “The Torah scrolls project was challenging and concluded successfully – serving the Jewish world. The MercyBeam project is extremely challenging, but this time we’ll serve all of humankind,” he says.