A mister for cyclists, just waiting for an investor.

If you are a cyclist who buys all the latest gears and gadgets for your bike, the latest one may be made in Israel. In a land where eight months of the year are warm enough for the beach, two cyclists dreamed up an invention to make you feel even cooler on two wheels.

They’ve developed the Q-FOG, a handlebar-mounted swiveling mister large enough to deliver 200 to 300 sprays but weighing only 80 grams.

Gone will be the days of cooling down with a drinking bottle or hydration pack, says partner inventor Kobi Rein.

“Yup, basically that what’s people do now: They take their water bottles for drinking and throw [the water] over their heads,” says Rein, who developed the product through the company Orkiba, co-founded with partner Arik Bar-Erez.

Q-FOG fits mountain bikes and road bikes, and theoretically could even be mounted on a tricycle. holds 100 milliliters (3.3 ounces) of water. The rider just pumps the nozzle for a blast of spray right onto the torso –– for an effect not unlike misting houseplants.

Inventors Rein and Bar-Erez are currently looking for funding in order to start manufacturing and selling the device, which Rein says is 99 percent developed and is so far self-funded.

By all accounts online, it seems this simple device is the world’s first mister for cyclists. It’s gotten rave reviews in media outlets around the world, yet investors remain unconvinced of the product’s bankability.

The duo tried to raise money through the crowdsourcing site Indiegogo, but fell far short from their goal of $70,000.

“We didn’t see success on Indiegogo,” says Rein, “but we have had a lot of encouraging feedback from all around the world: People are saying it’s a brilliant idea. Maybe because it’s not high-tech or a cell-phone app, many people feel this may be not where they want to put their money. But we believe in this project.” Before developing Q-FOG, the inventors consulted professionals in the field.

“We were advised by the Israeli cycling champion Omri Zerach, who told us his opinions about what would be important in such a product –– such as weight.

However, the device has potential to be considered a mandatory accessory in races where the weather is hot. 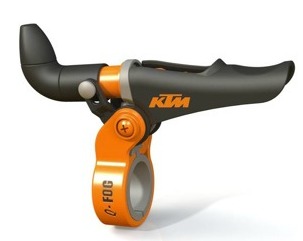 “Three years ago, there was a cycling championship in the Israeli city of Haifa taking place in the middle of the summer,” Rein explains. “They put out a pipe lined with misters all along the route to cool riders, who were very, very hot. When I came up to them with this product idea, they said, ‘Why didn’t you approach us a few months ago?’

“The point here is that you can mount it on a bicycle, and turn it right, left, down, up. You can use it so you don’t get water on your glasses, but on your chest where you need it to cool down. With the wind in front of you, it will make you feel refreshed.”

The lightweight solution could be a good one for long, hot rides. One online reviewer pointed out that among its advantages is that it can be used without stopping.

Rein is devoted full time to looking for strategic partners to help manufacture and sell Q-FOG internationally. Bar-Erez works as a design innovator for an Israeli company in China. Their startup Orkiba, founded in 2013, has another product in development that is currently under wraps.

UNCOVER ISRAEL - Get the ISRAEL21c
Weekly Edition free by email
Sign Up Now!
Bring Israel's story to life.
Millions of people around the world rely on us to gain a deeper understanding of Israel. We are the trusted source for original content you won't find anywhere else.
You can make a difference. Donate today to support journalism that brings Israel’s story alive.
SUPPORT ISRAEL21c
Read more on:   Q-Fog, Environment, Sports, Culture, Eco-Living, Cycling in Israel