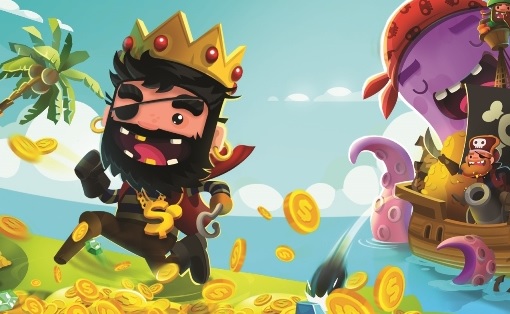 Pirate Kings, the mobile game that’s all about conquering empires and winning stashes of gold, is swashbuckling the gamer world and already counts 70 million downloads.

Jelly Button Games says 60 percent of players come from the US, England, Thailand, Vietnam and Malaysia. But the Israeli startup says it also has a fair share of gamers in the Arab world, with the majority in Qatar, the UAE and Kuwait.

“We started the company because we wanted to do something different, not gambling or cloning another game—we wanted to innovate and have fun,” said Alon Lev, one of the cofounders.

The startup, founded in 2011, is one of the 200 or so gaming companies in Israel today. The most popular gaming firm is Playtika, based in Herzliya, which sold for $4.4 billion to a consortium of Chinese companies in July.

Israel’s gaming industry also includes the likes of Toya-Play a Difference, Tab Tale, Funtactix, and Slate Science, among others.

In 2015, the international Casual Games Association (CGA) hosted its Casual Connect event, one of the biggest gaming conferences in the world, in Tel Aviv.