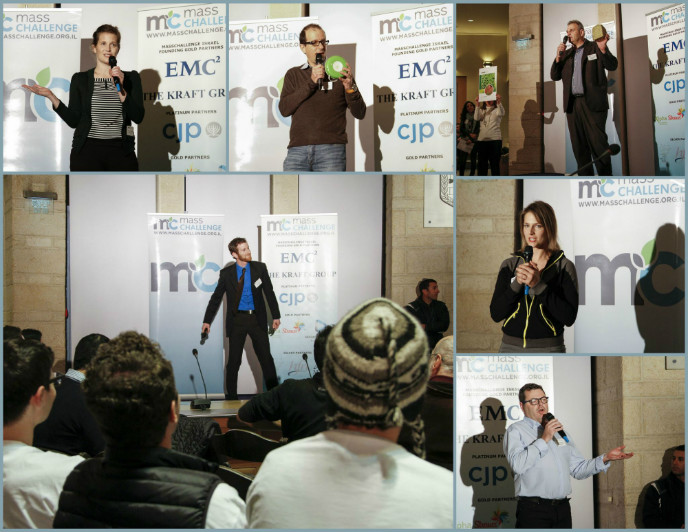 Minute to Pitch It participants present to the crowd. Photo: Yaniv Yur

Minute to Pitch It participants present to the crowd. Photo: Yaniv Yur

When one young startup exec froze at 20 seconds into his 60-second product pitch before approximately 200 investors, corporate executives, government officials, journalists and entrepreneurs, the audience broke into applause and encouraged him to try again.

The next time, he delivered the well-rehearsed pitch flawlessly, to another round of applause from the mayor and everyone else gathered in Jerusalem’s City Council chambers for the MassChallenge Israel 2015 Launch Event on February 11.

The pressure was palpable: 13 seed- or early-stage startups chosen from 100 applicants each got a “Minute to Pitch It” — in English, no less — in hopes of getting noticed by investors. Some have already raised capital, while others are still bootstrapping.

The nerve-racking experience was good practice for those planning to apply to the third cohort of MassChallenge Israel, though that was not a prerequisite for Minute to Pitch It eligibility.

MassChallenge  is a free four-month accelerator in Boston and London for promising startups from all over the world.

During the meet-and-greet portion of the evening, ISRAEL21c touched base with some MassChallenge Israel alumni we’ve featured: AutoAgronom, VoiceITT, Myndlift, Vecoy Nanomatrics, MedAware and JoyTunes.

They and the other six alumni (MadBio, Holodent, Lig, OralSave, TrendiGuru and Vigor Medical Technologies) have won prizes and/or funding since finishing MassChallenge, and those not already in the market are moving ahead with commercialization.

But the real buzz centered around the 13 newbies vying for attention:

UpRight, a wearable that attaches to the lower back and vibrates gently when you slouch, reminding you to correct your posture as per instructions from the UpRight app.

FreshBiz  board game and book for entrepreneurship education.

City Transformer,  developing a two-seat folding car that parks like a motorcycle. It won first place in a competition to get into the new Smart Transportation Accelerator launched by Israel’s EcoMotion  community and the Fuel Choices Initiative of the Prime Minister’s Office. 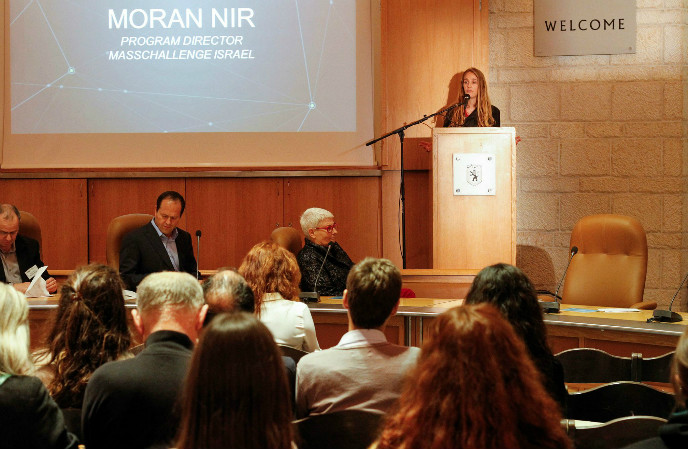 Hosting the MassChallenge Israel launch in Jerusalem was a feather in the cap for Mayor Nir Barkat and organizations such as Made in Jerusalem, BioJerusalem  and JNext, which are actively promoting Jerusalem’s fast-growing startup ecosystem. MassChallenge may even open an accelerator in the city.

MassChallenge Israel program director Moran Nir, herself a young entrepreneur, ended the program by opening the call for applications for the next June-to-October accelerator in Boston.

UNCOVER ISRAEL - Get the ISRAEL21c
Weekly Edition free by email
Sign Up Now!
Bring Israel's story to life.
Millions of people around the world rely on us to gain a deeper understanding of Israel. We are the trusted source for original content you won't find anywhere else.
You can make a difference. Donate today to support journalism that brings Israel’s story alive.
SUPPORT ISRAEL21c
Read more on:   israeli startups, made in jerusalem, MassChallenge, Moran Nir, Orna Berry, Spotlight on Israel