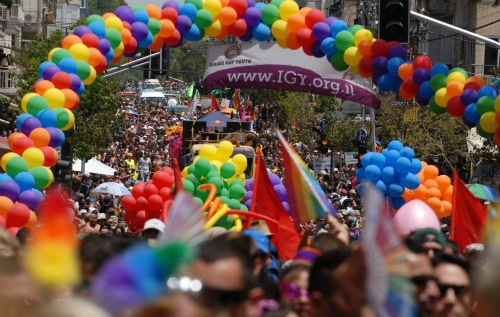 “Crazy” is how Russell Lord, a travel consultant who specializes in gay tourism, describes the weeks following Tel Aviv’s win as the World’s Best Gay City in an American Airlines/GayCities.com contest.

Since sweeping past Berlin, New York and San Francisco, Tel Aviv has seen a leap in “pink” tourism to its shores.

“I’ve been inundated by people asking me to put together tours,” Lord tells ISRAEL21c.

American Airlines described Tel Aviv as the “gay capital of the Middle East … exotic and welcoming with a Mediterranean c’est-la-vie attitude.”

“We are trying to create a model for openness, pluralism, tolerance,” Tel Aviv Mayor Ron Huldai told the Associated Press. “Live and let live – this is the city of Tel Aviv.”

There is no official count of gay tourists in Tel Aviv, but Adir Steiner, coordinator of city pride events for the municipality, says the number of international visitors to these events jumps every year.

“We’re not offering huge pride events like in Paris, London or Berlin with over 100 trucks. Our parade has 100,000 people but we’re offering something very unique,” Steiner tells ISRAEL21c.

Lord, who has been selling gay tourism packages since the late 1980s, wasn’t surprised by Tel Aviv’s win over bigger metropolises like New York or San Francisco. Tel Aviv garnered 43 percent of votes, while runner-up New York came in at 14%.

“There’s so much to do in New York, but not from a gay perspective. It’s very middle of the road. There are no special restaurants, clubs or streets. San Francisco is a great city but it’s not at its high point regarding gay tourism,” says Lord, of Kenes Marketing & Tourism. “The traveling gay and lesbian crowd is always looking for new destinations. We’re now ‘flavor of the month’ and I hope it lasts.” 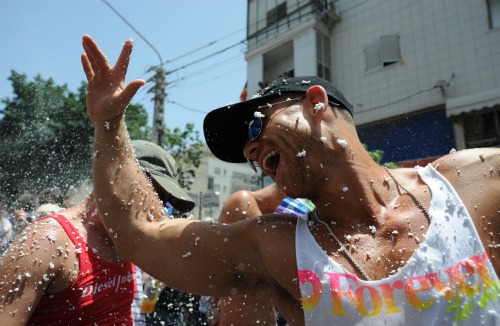 Photo by Gili Yaari/Flash90
Members of the gay community take part in events at the gay parade in Tel Aviv.

“The tourists tell us they enjoy the beach. They like that Israelis come and talk to them; they feel very welcomed,” says Steiner. “The vibrant Tel Aviv club scene is very attractive. There’s also the cultural scene with dance, theater, opera, music and museums. And there’s fashion and good restaurants. Tel Aviv has a lot to offer.”

Tourists are often surprised that no one in this Middle Eastern city bats an eye when a gay couple walks hand-in-hand or even shares a public kiss. Rainbow flags hang from windowsills in all neighborhoods of the city.

“Israel is a beacon of tolerance in an intolerant neighborhood, and Tel Aviv merely epitomizes this tolerance,” Evan Cohen, chairman of the gay conservative political group Likud Pride, tells ISRAEL21c.

The Tel Aviv municipality spends about a third of its marketing budget – some $100,000 – on gay tourism.

“You can spend millions on campaign buying and media coverage, but if you don’t have something new to say or show you won’t get even one tourist. On a small budget, we’ve managed to tell the world that Tel Aviv is going through a major change,” says Steiner.

Tel Aviv is one of the few cities in the world to own and operate a community center for the LGBT population, with city-paid staffers providing youth activities, parent support meetings, cultural events and, most importantly, a safe place.

“This house expresses Tel Aviv’s spirit of pluralism and the desire to respect every minority,” Huldai said at the 2008 dedication ceremony. “We are a breakthrough society and we decided to try and set up such an institution out of a belief that it is necessary.”

On the gay tour map

Israel is considered one of the most open countries in the Middle East when it comes to LGBT rights and laws. Gay marriage is not legal, but marriages conducted abroad are recognized and same-sex partner adoptions are permitted.

Pride events are held across the country, with the biggest parade in Tel Aviv. There are dozens of gay parties, gay clubs and even a “rainbow” hotel.

“Gay tourists want to visit Israel and they want to experience Tel Aviv,” says Lord. “They want to know about the sites, recommendations on restaurants, clubs, the ‘in’ place to be and be seen.”

Lord says the itinerary for a gay tourist will include the same sites one would find on a standard tour package, but with a twist.

“It’s the same Western Wall, it’s the same Masada, Dead Sea. But at Yad Vashem Holocaust memorial, for example, I make sure the guide also speaks about the persecution the LGBT community faced during that period. Or, at the Supreme Court in Jerusalem we’ll talk about LGBT rights in Israel,” says Lord.

Lonely Planet travel guide named Tel Aviv one of the top three cities in the world for 2010, describing it as “a modern Sin City on the sea” and adding: “There are more bars than synagogues, God is a DJ and everyone’s body is a temple.”

“People are surprised to hear what’s going on here,” says Steiner. “The city has a lot to offer. Our beaches, clubs, atmosphere … We’re the new boy in town.”

UNCOVER ISRAEL - Get the ISRAEL21c
Weekly Edition free by email
Sign Up Now!
Bring Israel's story to life.
Millions of people around the world rely on us to gain a deeper understanding of Israel. We are the trusted source for original content you won't find anywhere else.
You can make a difference. Donate today to support journalism that brings Israel’s story alive.
SUPPORT ISRAEL21c
Read more on:   Experience Israel, tourism, Travel, gay pride