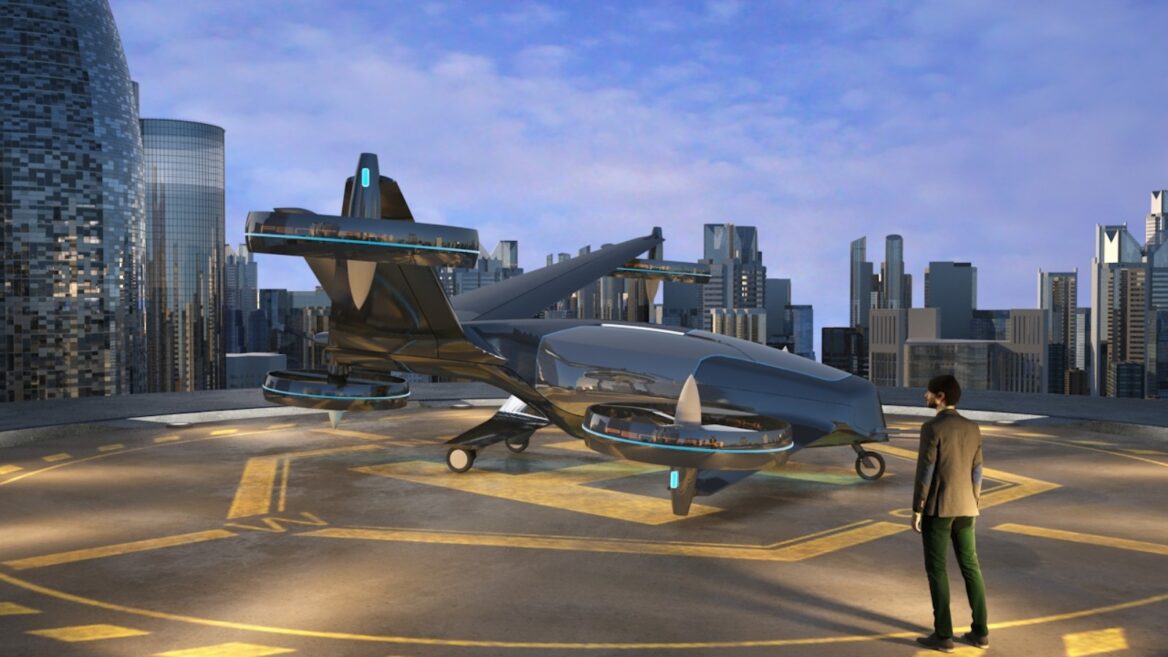 Artist’s rendering of a Pentaxi flying robo-taxi on a heliport. Image courtesy of Pentaxi

Following the 1967 Six-Day War, Israeli military planes facing hostilities across the Suez Canal were being taken out by Egypt’s new surface-to-air missile systems. And the Egyptians had built a 30-foot sand wall, severely limiting visual reconnaissance.

Major Shabtai Brill came up with a crazy idea: Attach a camera to the bottom of a toy airplane and fly it by remote control over the border to see what was happening.

Israel’s defense industry got serious about designing lightweight UAVs (unmanned aerial vehicles) after Egypt launched its surprise attack in the 1973 Yom Kippur War. Today, drones account for about half of all Israel Air Force flight hours.

Israel has evolved into the world’s leading UAV manufacturer, with 61% of total global sales of UAVs. In 2018, Israel exported about $1 billion in drone technology.

It’s that experience with UAVs, amassed by Yair Dubester and his colleagues at Netanya-based Israeli startup Pentaxi, which is setting the stage for the world’s first pilotless flying robo-taxi.

Pentaxi’s eVTOL (electrical vertical takeoff and landing) craft will be available in cargo and four-passenger models, able to carry up to 400 kilos (about 880 pounds) for 320 kilometers (nearly 200 miles) at a speed of about 240kph (150 mph).

CEO Ori Tamari says the first model will likely be a cargo carrier able to take up to 55 kilos (121 pounds) 100 kilometers (62 miles).

ISRAEL21c has covered other “flying cars” such as those from AIR and Urban Aeronautics, and Dubester estimates there are upwards of 200 such companies around the world.

How can Pentaxi, which has only raised about $1 million through a crowdfunding campaign so far, hope to compete?

“We have the best people in the world in the area of autonomous aircraft,” Dubester tells ISRAEL21c. “Together, we’ve been working on UAVs since 1974.”

Dubester headed the UAV division of Israel Aerospace Industries for seven years, following many years as an engineer and manager.

“When a potential customer comes to us, I say, ‘I’ve crashed more UAVs than anyone in the world.’ The point is: I have all the lessons learned from those years.” 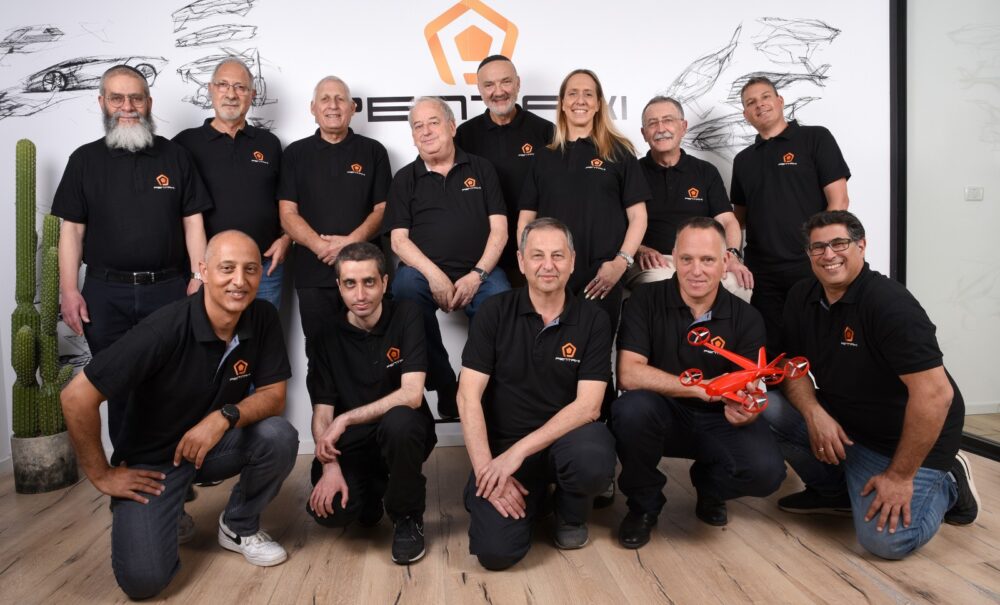 Pentaxi’s team, with Chairman Yair Dubester in back row, fourth from left. Photo courtesy of Pentaxi

And those lessons are going to play a critical role in calming consumer fears about trusting a flying taxi with no pilot.

“A lack of public acceptance can kill the whole thing,” Dubester, who is now Pentaxi’s chairman, admits. “It’s a real showstopper. Maybe we will put a pilot in there at first, for the sake of psychology.”

That’s what companies like Waymo and Uber have done with self-driving car tests. That won’t work so well for unmanned flying craft.

“You have a vehicle with five engines, two wings and it’s all moving independently. What pilot can control it?” Dubester asks. Only a sophisticated flight control system can handle that degree of complexity.

The five engines, arranged in the shape of a pentagon, are the reason for Pentaxi’s name.

Five, Dubester explains, is “the minimum number of motors to have so that if you lose one engine you don’t crash. If we had more engines, that would add weight – the worst thing in the world for aircraft.”

Pentaxi’s motors have a tilt mechanism that optimizes positioning for vertical takeoff and landing and for level flying.

This mechanism proved successful in two proof-of-concept tests with a forerunner to the Pentaxi. That prototype plane was displayed publicly (on the ground) for the first time this week at Israel’s 2022 Automotor show at the Tel Aviv Exhibition Center. 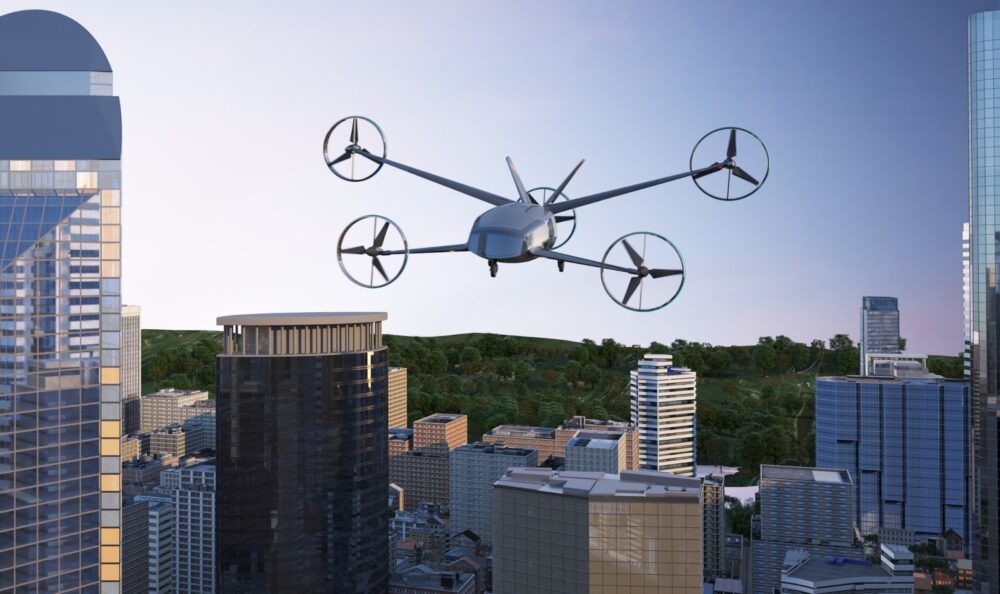 Pentaxi is designing models for cargo and for passengers. Image courtesy of Pentaxi

The flying taxi’s motors are arranged along two wings that remain outstretched, unlike the Fancraft internal rotor system on Urban Aeronautics’ CityHawk.

Without wings, Dubester notes, a craft needs 10 times the amount of energy. However, that means Pentaxi won’t have as small a footprint as its competition (CityHawk could land on a sidewalk in case of a medical emergency) and will need a dedicated landing pad.

For its marketing material, a Pentaxi is shown on the roof of the iconic round building of Tel Aviv’s Azrieli Center, which has “the added benefit that you can see all the traffic jams in Tel Aviv from there,” Dubester says with a smile.

Cargo version ready for liftoff by 2025

Dubester estimates that the first version of Pentaxi, designed to transport cargo, will be ready for liftoff by 2025.

It will be at least another three years before a passenger Pentaxi will be transporting paying customers, depending on whether aviation regulations meet all the players’ satisfaction. 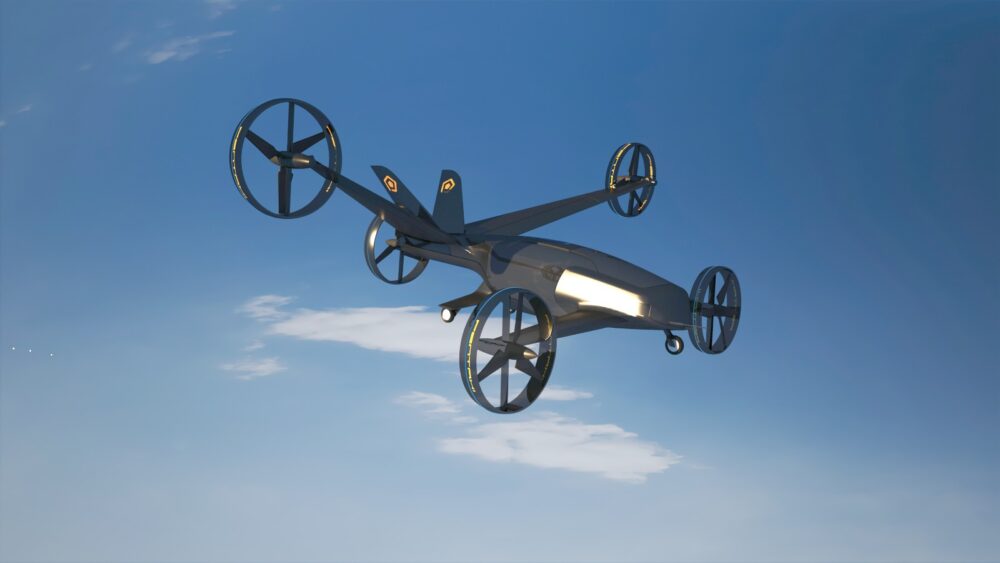 This is what an airborne Pentaxi would look like. Image courtesy of Pentaxi

According to a five-page manifesto from Uber, flying taxis can be successful only if they have VTOL capability; are 15 decibels quieter than helicopters; operate entirely on batteries and at dedicated skyports with charging infrastructure; carry a maximum weight of just under 1,000 pounds for four passengers; travel on the ground without spinning their propellers for 300 feet; fly a minimum of 60 miles on end-of-life battery; and operate continuously for at least three hours.

Another factor Dubester and his team discovered: Flying taxis will only take off if the vehicles are good looking.

Why we need to fly

Still, we had to ask: Do we really need flying taxis?

“Just look at Sao Paolo,” Dubester replies. “To get from the city center to the airport takes two hours by car. It’s 10 minutes by helicopter. Around the world, people spend on average six weeks a year in their cars commuting.”

Pentaxi is looking at two initial markets: the United States and Japan. Japan, Dubester notes, “wants to lead the air taxi market but they’re not going to develop it. They look to companies like us; then they’ll manufacture the vehicles.”

After all, one of the biggest reasons why UAVs took off in Israel before anywhere else is because of Israel’s tolerance for failure in the development process. When prototypes crash, Dubester notes, “we learn, improve and go on. And after the next crash, too.”

UNCOVER ISRAEL - Get the ISRAEL21c
Weekly Edition free by email
Sign Up Now!
Bring Israel's story to life.
Millions of people around the world rely on us to gain a deeper understanding of Israel. We are the trusted source for original content you won't find anywhere else.
You can make a difference. Donate today to support journalism that brings Israel’s story alive.
SUPPORT ISRAEL21c
Read more on:   Technology, transportation, flying car, electric vehicle, Pentaxi