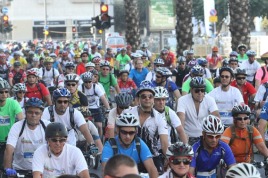 The Sovev Turki Elite Tel Aviv cycling event is so big that the Ayalon Freeway – one of the country’s main thoroughfares — shuts down to all vehicles until it’s over. This year’s event takes place on September 25, and organizers say more than 30,000 riders are expected.

Sovev Tel Aviv is the country’s biggest cycling event, but hardly the only one. The beginning of autumn marks the kick-off for bike-a-thons – races and benefits – across Israel.

Grab a helmet and water bottles, put Queen’s “Bicycle Race” on your music list, and get on your bicycle for one of these:

Choose between three track options – 90-km, 60-km and 30-km — in the Hula Valley. This race is run under the auspices of the Israel Cycling Federation, the governing body of competitive cycling in Israel. There are tens of races across the country throughout the year including international races.

This year marks the first Epic Israel three-phase challenging mountain bike tour. It’s a two-person team stage race that kicks off in the Lower Galilee, goes up into the Carmel Mountains and then rounds out at the Megiddo Forest. Organizers say the event aims to “raise awareness of mountain biking in Israel, and to encourage an appreciation of nature’s beauty, and humanity as a whole.”

The seven-day Israel Ride takes participants from Jerusalem to Eilat, through the Negev Desert. It’s an adventure that benefits Hazon, America’s largest Jewish environmental group; and the Arava Institute for Environmental Studies, the premier environmental education and research program in the Middle East.

A cycling tradition in Israel, this event steers cyclists around the Sea of Galilee. The scenic 63-kilometer ride takes you past landmarks, holy sites and stunning landscapes. Nearly everyone ends with an ear-to-ear smile.

Prefer riding in the spring? About a dozen biking events run from March to July. One of the favorites is the 68-km Round Western Galilee bike tour through the beautiful scenery of the Western Galilee.