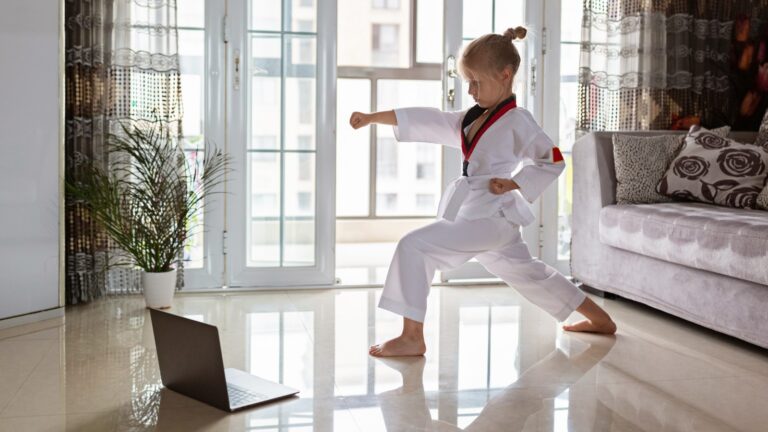 A girl practicing taekwondo online during the Covid-19 lockdown. Photo byAlinaBuPhoto via Shutterstock.com

Organized physical exercise and participation in sports program – even via remote video platforms such as Zoom – can help adolescents’ psychological resilience, a new study from Tel Aviv University researchers reports.

The survey looked at 473 adolescents during Israel’s Covid-19 lockdown earlier this year. The researchers compared two groups: “Adolescents who continued to practice in an online group context, and their peers who exercised on their own,” explains lead author Dr. Shahar Lev-Ari, head of the department of health promotion at Tel Aviv University.

The results: Adolescents who continued sports programs through an online format practiced more and exhibited better resilience, self-esteem and morale, and expressed fewer concerns about the pandemic.

Teens “who continued to take part in their sports programs through the Internet practiced more – 242 minutes of practice per week vs. only 191 minutes for adolescents who worked out on their own,” notes Lev-Ari.

To measure emotional resilience, the researchers used a questionnaire called the Connor-Davidson Resilience Scale. The teens were asked to respond to statements like, “I tend to bounce back easily from illness or difficulty,” or“I don’t despair easily when I fail.”

As with their physical resilience, “the results were unequivocal,” Lev-Ari says. “The adolescents who continued their sports program exhibited higher spirits, less anxiety about themselves and their families, and lower levels of stress – even though their practice sessions continued through Zoom.”

Some 84 percent of the adolescents who participated in sports said the continued practice sessions helped them cope with negative feelings and low spirits during the lockdown, while 55% indicated that contact with their coach served as a meaningful source of support.

The research conclusion is particularly timely: As Covid-19 continues to rage and countries consider additional lockdowns, the value of organized physical exercise should not be discounted.