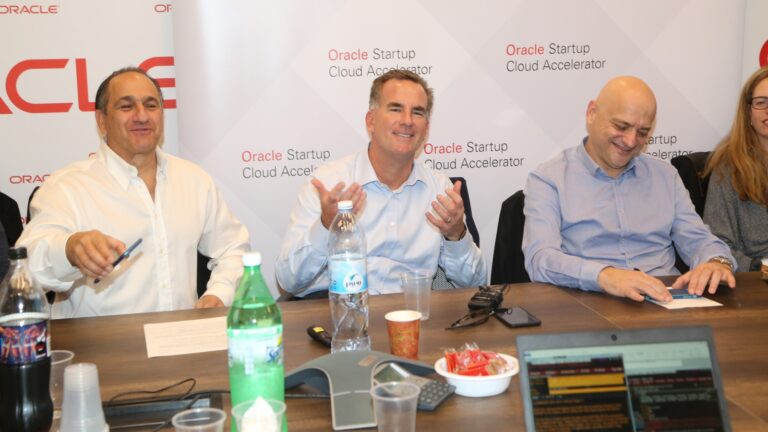 Run by the Oracle research and development team, the program will provide six months of mentoring from technical and business experts, state-of-the-art technology, a co-working space, access to Oracle’s customers, as well as partners and investors, and free Oracle Cloud credits in addition to a global network of startup peers.

The call for applications will open later in 2017.

“The next five to 10 years promise innovations and growth that will drive new business ideas enabled by the cloud,” said Oracle Senior Vice President of Product Development Reggie Bradford. “Oracle understands that startups are at the heart of innovation, and through this program we aim to give startups access to extensive resources and support when they need it most.”

He said that Israel has “one of the most vibrant and exciting startup ecosystems with a rich heritage of innovation.” Attending the January 2017 launch of the Oracle Startup Cloud Accelerator in Tel Aviv are, from left, Avi Stern, CFO at Wix, Moshe Selfin, COO/CTO and partner at Credorax, Gil Hoffer of Oracle Ravello and Daniel Zaturansky, cofounder and COO of Powtoon. Photo by Sally Farag

In 2003, Oracle Israel opened an Excellence Center for Israeli startups, independent software vendors and original equipment manufacturers in cooperation with the Office of the Chief Scientist in the Economy Ministry. Companies that have taken part have realized more than $150 million in total estimated exits.

“Oracle today marks the 20th anniversary of its Israeli subsidiary. Over the past two decades, the company has acted as a source of innovation in Israel,” said Uzi Navon, Oracle Israel country leader, on January 16.

Oracle’s Israel R&D team is composed of eight development centers that have joined Oracle by acquisitions.