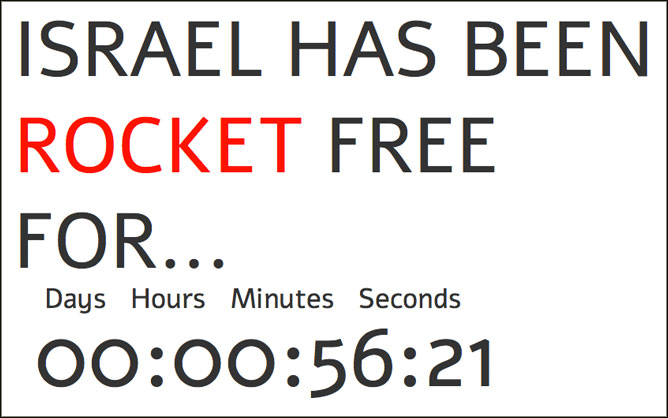 The countdown clock at Israelhasbeenrocketfree.com

The countdown clock at Israelhasbeenrocketfreefor.com

To give people abroad an idea of what it means to live under a constant barrage of rockets, two Israelis have set up a real time online clock timer that automatically resets when Hamas fires toward Israel.

Aaron Friedman, marketing manager at Curiyo, told local media that he thought up Israelhasbeenrocketfree.com to help visualize for people around the world what it’s like to live under constant attack.

He turned to 18-year-old tech developer Yehonatan Tsirolnik, a high schooler set to serve in the IDF’s military intelligence unit in October, to code the project.

“Israel has been under NON STOP rocket attacks for years and in the past few weeks its gotten much worse. And I want people to know what that really means,” Friedman writes on his Facebook feed. “So, with the help of Yehonatan Tsirolnik, we developed a site which counts up from the last rocket attack. Whenever a rocket is fired, it restarts. Sadly, this counter never really gets above an hour.”