In the mixed Arab-Jewish city of Jaffa , the local community center seeks to create friendship and understanding, while meeting local needs. 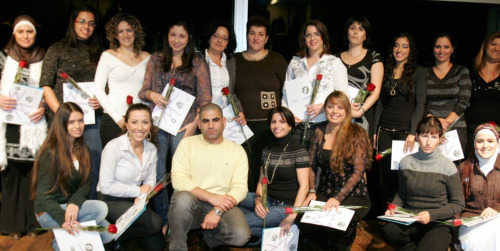 Some of the women who took part in a technology-training course developed by the Arab-Jewish Community Center in Jaffa, with support from the Peres Center for Peace, and Cisco.

Israel’s port city of Jaffa is one of the world’s most ancient, with archeological relics discovered there dating to the Ottoman era. Jaffa has served as an entry port for people of all faiths making their pilgrimage to the Holy City of Jerusalem. In the 21st century the city’s population is still a colorful cultural and religious mosaic, whose needs are served by the Arab Jewish Community Center.

In recent years the city has become quite diverse, with some of Israel’s wealthiest residents living side by side with the nation’s most marginalized. Adding racial and religious diversity and tensions to the mix, Jaffa has developed a personality that’s both rough and intoxicating.

Servicing the social needs of such a varied population – about 50 percent Muslim and Christian Arabs and 50% Jewish – requires vision.

And vision is at the heart of the carefully planned and run Arab Jewish Community Center in the heart of Jaffa’s Ajami neighborhood – made famous by the Israeli movie Ajami, which has now been nominated for an Oscar.

The house of the French ambassador is situated above and there is a clear view to the Mediterranean Sea from this center that provides both a second home and hope to the citizens of Jaffa. “One of our outstanding missions is really to create this real friendship and mutual understanding between people,” says Marina Boykis, the center’s public relations manager.

Wearing anything from body-covering burkas to denim minis and bikini tops, women get their own workout space at the center on certain days of the week so they won’t have to mix immodestly with their male counterparts. For secular Israeli women it’s a novelty. For the religiously observant Jewish and Arab women, it’s a must. There are men-only days as well.

“The sex-segregated gym is a minor aspect of our work,” says Boykis. In addition, the center offers much of what you would expect at ordinary community centers in America, such as crafts, sport and hobbies. But the Arab Jewish Community Center caters to the special needs of the community in its own way.

First of all, “we are a community center,” says Boykis, “that offers basic community services. If you want to learn Arabic you can sign up for the course, and there are no political or identity issues” involved, she promises. Teachers are Jewish, Muslim or Christian.

Middle East style music courses are novel, too, she adds, but most novel is the center’s daycare for Arab and Jewish kids – those at risk. Taking care of 24 children from six to 14 years of age, the center picks them up every day after school and provides a hot lunch, volunteer tutors for homework, and then the kind of high-quality, after-school activities their parents would never be able to afford, like soccer, ballet, and darbuka drumming, all led by professionals.

“This is one of the great aspects of the place, that we have involvement from all groups of people,” Boykis tells ISRAEL21c. “Americans help with the English, Israelis with literature and it helps to have members, older Arabs and Jews, helping out, too.”

How do you say “hope” in Arabic?

Some of the Jaffa residents who volunteer or work at the center, which is open at least six days a week, also take advantage of the courses on offer. There’s a course called Al Amal, for example, which means “hope” in Arabic, that’s bringing middle-aged Arabs into the computer age. This course is implemented by IT Works, a non-profit that empowers people through technological training and skilled employment placement, and in partnership with Cisco, the multinational leading supplier of networking equipment and network management for the Internet. It is IT Works representatives who teach the course, giving 21 women the much-needed vocational training to help them integrate into cyberspace.

Like numerous other international companies in Israel, Cisco gives back to the community by offering and sponsoring training in high-tech as part of its corporate social responsibility efforts. This particular course is being taught in conjunction with the Peres Center for Peace, which just moved in down the street in Jaffa, and cooperates frequently with local partners like the center. Founded by President Shimon Peres, the Peres Center’s goal is to build an infrastructure of peace and reconciliation by and for the people of the Middle East.

The Arab Jewish Community Center was established in 1993 and is supported by the city of Tel Aviv-Jaffa. Operational costs are covered by the city, while special projects seek funding from private and institutional donors. With a membership of more than 3,000 people, “we have real co-existence taking place,” says Boykis. “People who are Jewish and Arab are really interacting and knowing each other on a personal level, and are forming respect for each other.”