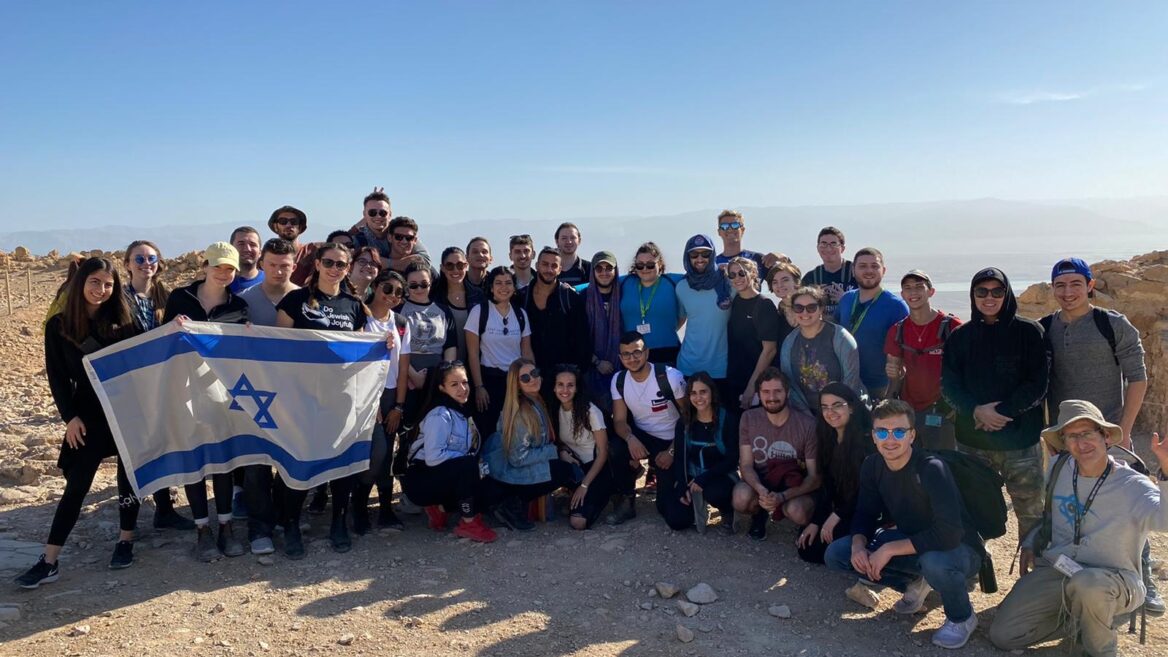 Rachel Poulin co-staffed a Birthright trip at the end of December 2019 into January 2020, here shown in the Negev Desert. Photo: courtesy

Every morning during their recent Birthright journey through Israel, a group of students and young professionals aged 18-24 learned a fun fact from ISRAEL21c related to the day’s activity.

On their way to a walking tour of Safed (Tzfat), for instance, they learned that celebrity Conan O’Brien had visited the Upper Galilee city’s Ziv Medical Center in September 2017. He declared that its medical team deserved a Nobel Prize for Peace for treating Syrian men, women and children spirited across the border after being wounded in Syria’s civil war.

“The more relatable the fun fact was the more it added to what they experienced that day,” says the group’s co-leader, Rachel Poulin, who also happens to be our Outreach and Engagement Coordinator.

Poulin previously staffed a Birthright trip in August and found participants enthusiastic about having ISRAEL21c content incorporated into their tour. 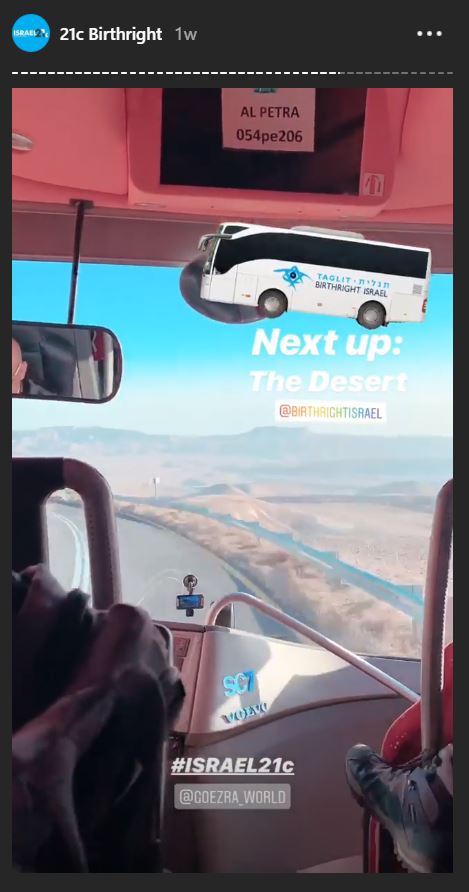 “It’s about seeing Israel in a more realistic way and showing all the incredible things that Israelis are doing,” she says.

So before taking off with the December-January trip, which was mainly for Los Angeles and New York residents, she contacted Birthright provider Ezra World to suggest doing the same.

“Ezra World was very willing and very excited to have ISRAEL21c content be an element of the trip,” she says.

During the 10-day free trip, Poulin’s group was joined by another Ezra World group for a session in which the 60 participants were split into small groups and asked to find an article from our website that struck their fancy. Each subgroup shared with the others what they had learned from reading the article.

“For the most part everyone chose something different and it was cool to be able to learn all these new things from each other,” says Poulin. “The most popular topics were health and environment. It seemed everyone learned something new that day.”

At the end of their journey, Poulin invited participants to submit photos on the theme “The Beauty of Israel Inside and Out.” They had to share the photo on social media along with an explanatory caption.

Raz Shamay shared a panoramic video of the Masada landscape and shared the legend of the mass suicide of the Sicarii rebels there during the Roman occupation. “Being together in a state of such rich history, made us love, understand, and accept ourselves more,” she wrote.

With the new year approaching I feel the need to share a little story: Thousands of years ago a Jewish man with the name of Josephus, was a rebel leader who was captured by the Romans to serve as an historian. The Romans forced Jewish families to convert religions, leading to a mass suicide of the Sicarii rebels and Jewish families of the Masada fortress. The Sicarii rebels fell heroically against oppression and refused to compromise, which to me this is the most heroic thing. We are raised to be proud and sure of the decisions we make in life because we do what we think is best for ourselves. Never to second guess, and to always be proud of who we are. Spending the New Year in the place that makes me feel more at home than anywhere, has showed me that this year has been hard, but I kept pushing. No matter if it was stress from school, disagreements with friends, family, and loved ones, struggling with working crazy hours, and most of all: losing people. Losing people who leave long lasting memories is always hard, but we move on and we cherish, learn, and love. I have no doubt the following years will be just as emotional and crazy, but that just makes me push harder. Taglit has introduced me to people who I have created bonds with, that lead to show being together in a state of such rich history, made us love, understand, and accept ourselves more. Just as the Sacarii, I am proud of who I am, and I will never compromise for my happiness and the decisions I make. I’m proud to be me and what I stand for, and I hope you all do too. happy new year from your proud jewish mother((: #israel21c

Angie Fraistat shared her photo of the Dead Sea: “Here is a picture of me and people I met only a week ago at the absolute lowest point on earth; a reminder to me and everyone that you might be in a low place right now — or the lowest you’ve ever been; but to always persevere because it only goes up from here.”

????lowest point on earth. • • • • • •i’d say it’s pretty fitting for me to have swam at the lowest point on earth on my last day of 2019. although i had my fun, i had quite a rough mental year and hit many low points; sometimes never understanding how i could be so low. it took a lot of strength to be able to be here today and my trip to israel was just another thing that i needed to help me heal. within these ten days i’ve learned more about myself then i thought i could. meeting new people from all over the world, traveling to beautiful places, hiking tall ass mountains and opening up discussions on what faith means to us as well as listening to rabbi talk about perseverance, resilience, and never giving up. never giving up is such an important thing that i learned on this trip and especially this year. push yourself up the mountain, push yourself to learn, push yourself to believe that god has a plan for all of us and never give up on the universe. the idea of “never giving up” is something that we all need to remember every single day that we are on this earth. so here is a picture of me and people i met only a week ago at the absolute lowest point on earth; a reminder to me and everyone that you might be in a low place right now- or the lowest you’ve ever been; but to always persevere because it only goes up from here.

Poulin says everyone welcomed the introduction to our website as a way of staying in touch with the country they’d just explored for the first time. 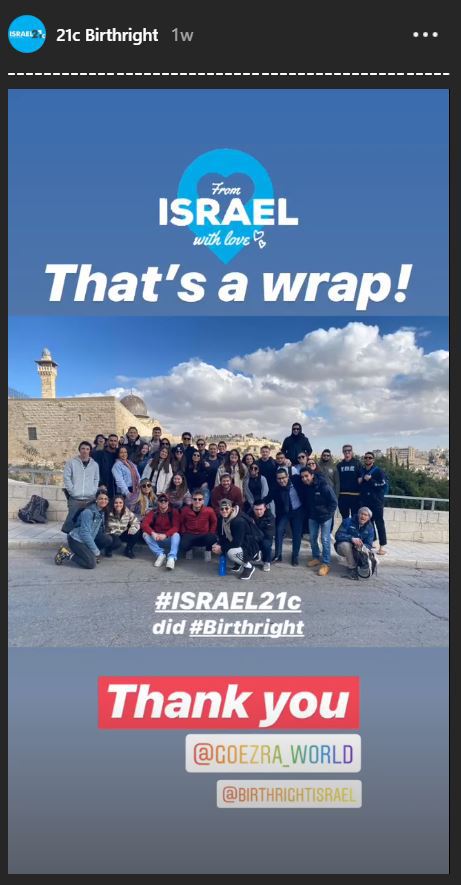 Rachel Poulin posted this Instagram story from Jerusalem on the final day of the Birthright trip.

Participant David Kotin commented, “ISRAEL21c created a new and interesting perspective on Israel for me and many others. Because of them, I look to stay connected with Israel and can’t wait to come back!”

Sam Adler added, “As a scientist, it was great to hear about the scientific and medical contributions Israel has given to the world.”

Poulin’s co-staffer on the trip, Elie Cohen-Saperstein, said the counselors are responsible for creating ways to further engage participants through their journeys.

“ISRAEL21c made it extremely easy to do so and our participants were very interested and engaged. Before the trip I had subscribed to updates from ISRAEL21c but never really paid attention to them. I can now say I will use it as a resource on my future trips and encourage everyone I know or come in contact with to subscribe to the amazing content provided by ISRAEL21c.”

Click here to apply to the Digital Ambassador program.